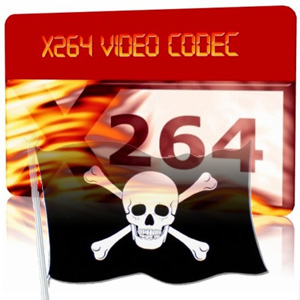 Where it might take giant corporations years to come to a conclusion on a major standards change, pirates from the video scene lead to an implementation in a matter of days, a source tells SiliconANGLE. Over the years, the video scene for many major piracy networks have used XviD as their primary encoding for video files due to its widespread playability, high quality, and availability; however, over the years another standard has begun to eclipse that: x264.

To control what goes into a release into these scenes the members agree upon certain carefully worded standards for labeling and identifying the contents and trade in this information via information sources they call NFO. Named after the .nfo (aka info) extension for files that often came along with warez releases that described the contents of the release and often contained a message from the group declaring credit for the release.

As a result, the announcement of the use of the new codec into the pirate scene and community came by way of an NFO published in a space the public can see it on scenenotice.com,

x264 has become the most advanced video codec over the past few years.

Compared to XviD, it is able to provide higher quality and compression at greater SD resolutions. It also allows better control and transparency over encoding settings. With CRF in the mix, we can also ensure that a diverse array of material will get the most appropriate bitrate for them and not arbitrary and fixed sizes. This standard aims to bring quality control back to SD releases. There are many standalone players/streamers such as TviX, Popcorn Hour, WDTV HD Media Player, Boxee, Xtreamer, PS3,XBOX360, iPad, HDTVs that can playback H264 andAACencapsulated in MP4.

The SD x264 TV section was formed to separate releases from the ruleless world of TV-XviD. This document will cover the rules and guidelines for only SD resolution x264 television rips.

As a social phenomena, piracy is mentioned quite often these days with the takedown of Megaupload, the advent of ACTA, and the fall of SOPA and PIPA—but much of the news is about what massive media corporations and governments are trying to do to stop piracy and little reveals what they’re up against.

The reason why legislation like ACTA, SOPA, and PIPA cannot do anything substantive about what giant media cartels like the MPAA, RIAA, and IFPI fear within piracy is because pirate networks exist in the very fabric of the democratizing and decentralized aspects of the Internet and general computing. As a mass-communication media, the Internet levels the playing field for releases of digital content fromChinato theUnited StatestoEuropeand the individuals behind the distribution of pirated digital media are as numerous and varied as collectives like Anonymous (and certainly better organized from many more years of acting in concert towards a common goal).

This is represented in how quickly the scene cleaved to the superior x264 format, drafted standards, and then pushed them into the community for mandatory implementation.

In 2011, Valve’s CEO Gabe Newell has said that “piracy is a service problem” and this highly democratized and rapid deployment of a new standard among pirates provides a bright, shining exemplar of this. The x264 format was chosen because of its excellent quality and broad adoption across devices—every video that these networks rip from their proprietary formats and change into this high quality and easily played format will be more valuable and less costly than the device-locked formats released by venues that make people pay for them.

As long as pirates adapt more quickly than the copyright cartels towards better quality and more available formats than the copyright holders, organizations represented by the likes of the MPAA and RIAA will always be falling behind.