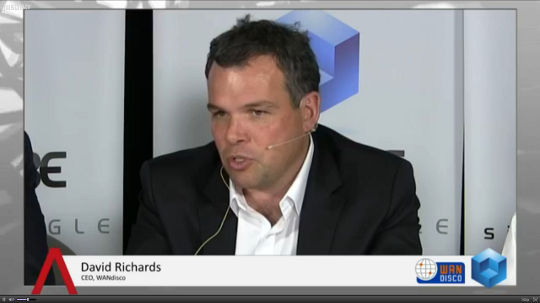 The Secret to WANdisco’s Big Data Success? Products You Actually Want to Buy

WANdisco CEO David Richards and Jagane Sundar, CTO and VP of Engineering of Big Data, have discussed the company’s Big Data operations, its Hadoop distribution and their plans for the future at theCube, live at Strata 2013.

The company – whose background is in data replication and position itself as provider of high-availability software for global enterprises – uses “selling products that customers are willing to buy” as a strategy for success that it has been using from the start and plans to employ in their play at the Big Data Market, CEO David Richards (pictured below) explained.

WANdisco’s entry into the Hadoop distribution market started with the acquisition of AltoStor, and using the newly acquired unique skills in the field of Big Data and specifically Apache Hadoop, it launched the first fully tested, production-ready version powered by Apache Hadoop 2.  While other companies have since released new distributions in the market, such as Intel, EMC Greenplum with their fourth such product, or Amazon Redshift, WANdisco still holds strong competitive advantages. As Richards pointed out, while it is not exclusive and supports other platforms, such as Cloudera, the company encourages its customers to use their own distribution, as they can guarantee non-stop service without ny downtime or data loss.

CTO and VP of Engineering of Big Data Jagane Sundar added that WANdisco is an innovator in the Hadoop distribution market, “the leading edge of the Hadoop distribution business,” as it has been the first company to introduce multiple server architecture in Hadoop and other industry firsts. Through data replication over the WAN, the distribution offers a non-stop NameNod designed for optimum performance, scalability and availability.

WANDoop representatives expect more enterprises to move to Hadoop, CEO David Richards saying 2013 will be the year where the number of Big Data implementations will increase tremendously.

Jagane Sundar added that in order to stimulate adoption, the Big Data industry will have to find a solution for the significant problem posed by data management – as data grows, it becomes harder to store several copies of the information in different locations. WANdisco plans to address this issue with a next generation file system that will replicate data over multiple servers.

The company representatives also see the private cloud as the big winner in Big Data, therefore this area needs a lot of future development. While industry advancement will be supported, and possibly driven, by the massive experimentation in the public cloud, the advantages of private cloud will eventually sway enterprises.

Discussing his plans for attacking the Big Data market, Richards said WANdisco was on track. It has released four different products in a short amount of time, it has started to build a partner network and plan to increase it and expects a boom of its number of customers in the next nine months.

See the full segment below: