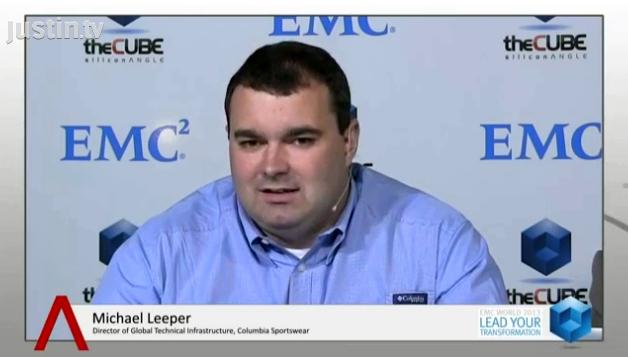 SAP is in an area that the organizers of theCUBE have focused on ever since its inception three years ago — virtualization. The second ever Cube event was SAP Saphire Now, and its influence returns for this interview with Michael Leeper, Director of Global Technical Infrastructure, Columbia Sportswear, spoke with theCUBE hosts John Furrier and  Dave Vellante during EMC World about the trends of virtualization world. That trend seems to now encompass the virtualization of any application, or, as the marketing guys call it, the “software mainframe”.

Talking about his company, Michael Leeper disclosed that at the moment Columbia Sportswear is 100 percent live on SAP, fully virtualized on the VBLOCK 700, but the story began three years ago when the company was just starting out as an IT organization. Back then they were trying to figure out how to make things better, how to provide a better service to the company and how to really provide a platform that could be scaled to meet the needs of the business of today, and still be relevant in the future.

And so the process of “virtualizing our world” began.  In just a short, nine-month span, the company went from 25 percent virtual to 90 percent virtual, while also modernizing the platform. The CEO of the company had a vision when he decided one day to buy SAP products. And so, the process of shifting from legacy ERP system (run on IBM power) started, and virtualizing SAP was to become the crown jewel of the company.  The subsequent days filled with debates among the members of the team, but the conclusion was almost unanimous: they needed to be virtual.

Columbia Sportswear believed wholeheartedly that this was not a risk, but a greenfield implementation. From an infrastructure point of view, they were absolutely sure that this virtualization could be implemented, but the decision was met with slight resistance from the app team. The conversation was focused on how much capacity and performance they were using in the physical world. They were running about 120 gigabytes of data, and they had to be promised that they were going to get everything that they needed. The secret to making the team happy was overprovisioning.

The whole process was supported by EMC technology and their solution experts, crafting the perfect environment for Columbia Sportswear. In the early days, not only EMC brought to the table their classic storage and configuration based engineering staff, but also some very talented SAP staff.  They were able to leverange an entire community of engineers, knowledge and experience, building a world-class environment, before this was done “by the book”.  This partnership wrote the book…

“There was a lot of trust and a lot of belief involved, that this was the right thing to do, and so we built a platform that was ultimately a change in the game.”