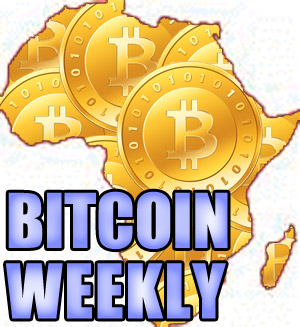 This week, the Africa has been bright in the news about Bitcoin and how a decentralized cryptocurrency could go a long way to hooking into the cashless society burgeoning there. As mobile technology takes hold and mobile payments become more prevalent–where a large portion of the population don’t have bank accounts, but an equally large portion own and use mobile devices for payments.

It’s a fertile ground for a technology like bitcoin to provide a competitive solution to payments.

Kenya has a fast-growing mobile user base and, like most of Africa, little to no central banking, as a result to do digital payments and transfer money, Kenyans look to their mobile phones. Transfer services such as Western Union and Moneygram also represent a problem due hefty fees assessed when trying to move money in and out of the country; as a result, the mobile service Kipochi–based on the Swahili word for “purse”–has launched to offer a lightweight, easy-to-use bitcoin wallet.

According to press on the matter, Kipochi piggy-backs on a mobile money service already present called M-Pesa–a system that many Kenyan systems already use to transfer money.

Pelle Braendgaard, CTO of Kipochi, posted the news of the launch of this wallet-service on reddit and proceeded with a short Q&A session. Including that Kipochi is hoping to find a favorable market in Kenya and expand into Tanzania and beyond.

“It currently uses a combination of web and SMS. We are testing a USSD implementation which allows us to bring bitcoin to every single feature phone user in about 20 countries in Africa,” Braendgaard added; including that web and SMS transfers allow Bitcoin transfers via mobile phone number everywhere but in the US.

Currently users are limited to 1 BTC a day in transfers; but the FAQ says the company hopes to lift that restriction.

Noel Jones authored a guest post on The Genesis Block wrote about the emerging technical presence of Africa and how that stands to become a fertile ground for bitcoin. To start, he cited Eric Schmidt, the Executive Chairman of Google, “The Internet in Africa will be primarily a mobile one.”

Not only has Google had eyes on Africa, but China also has been investing in the nations in that region.

Of course, there’s also some questions about what bitcoin adoption might mean for the Kenyan economy. Due to a lack of a central banking system and an economy steeped in government corruption that also feeds large scale into taxes, there could be some very real shake ups in political and economic power in the country.

Should widescale adoption actually occur within Kenya the effects could be tremendous – not just for Kenyans, but for the bitcoin market as well. In 2011, Kenya’s GDP climbed over $33B with mobile payments comprising some $10B of that figure. Bitcoin’s current transaction volume is roughly $20M per day, or just over $7B per year. If bitcoin were to replace Kenya’s mobile transactions, BTC market liquidity would more than double. To date, Kenya’s bitcoin adoption has been muted, with approximately 1,300 downloads in a country with 41 million people, but with all the pieces set align over the next few years, it is only a matter of time before Bitcoin and Kenya find one another.

At this point, it may well be a game of wait-and-see.

As early as March 2012, Africa’s market position for a virtual currency market–or at least a mobile market with higher liquidity and lower fees–had become obvious to a multitude of economists and researchers. During that month, SiliconANGLE reported about Africa’s potential as published in MIT’s Technology Review.

Since Africa has a long history of creative thinking about using technology in the absence of heavier infrastructure, the people who live there have been of interest to technologists. Equally so, with the wide population who own mobile devices and use them to make mobile payments means that it’s an ideal place for bitcoin to take hold–however, as we’ve read above, bitcoin has had little impact so far.

Proponents argue this is because current systems of monetary exchange, such as M-Pesa, are currently sufficient and bitcoin simply doesn’t have a good user experience, or ease of exchange, as a result, it’s adoption is slow. Therefore, something that changes user experience an ease exchange of BTC for money (or goods) would break that wide open.

Critics argue that even in Kenya–the target nation for Kipochi–political forces may work to protect what taxes and bribes are sifted out of the current mobile payments. Since the use of BTC would make it harder for taxes and fines to be placed on transfers and exchanges, and the apps themselves would be democratized out of mobile technology; there could be a real chance that politicking might lead to unintended consequences.