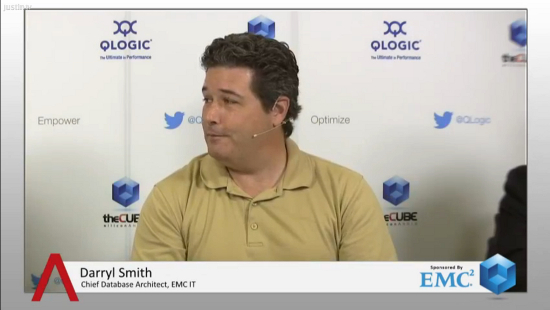 Describing his OpenWorld experience, Smith shared he had “met with several customers, primarily I am here to get to learn,” going to sessions, talking to people to identify trends.

Asked about Oracle’s new Database 12C release and the features that he found useful, he mentioned  Oracle had added a lot of features that really help with the storage, and “a lot more integration between the product sets that they’ve got.” In-memory was also “something that will have to look into, see how the implementation was done with 12C and if it fits our workload, start using it.”

Smith explained he had been working with Oracle databases since version 4. “IT-as-a-Service requires automation,” which allows database administrators to focus on getting “in front of the business, understand what their problems are, so that we can be more agile and responsive.”

Commenting on backup solutions, Smith said that “DBAs hate black holes or black boxes. We like to know what’s going on.” In the case of backups, “you really don’t know what’s going on, how can you trust it’s safe,” he said. However, today things are much simpler, “you can now see if the backup is running, estimate when it will be done.”

Asked how automation transformed the role of the DBA, Smith said automation was “both disruptive and opportunistic for DBAs. Give me the time to get out there and really understand what the customers need. It will help me grow not only personally, but also professionally.”

“Once DBAs surpass the drowning conversation, Smith explained, “we really don’t have the time, we’re stuck in the weeds dealing with this growing amount of data.”

After moving on to discuss architecture and other aspects, automation would turn into a very positive conversation.

“We’ve been building IT as a service for a while,” Smith said, with infrastructure and databases as a service. “Where we are now is full automation. We are automating the full application stack,” backups, built in security, and a built-in DevOps model. “The reality is I don’t need to spend a lot of hours deploying apps, configuring systems, I should focus on making that Oracle Database run better,” said Smith.

Asked how far automation could go, Smith said the real question was “why not be able to provide a better service for a business rather than just survive” with the help of automation?  As far as DPaaS is concerned, “you can literally set service levels for backup, set priorities,” Smith explained. “I like to think about it a little differently, go ahead, automate it all, it is very easy to drop down the DD Boost agent and fully automate the backup. I can actually treat every database almost identically and not worry about any of them losing data.”

The advice Smith would give practitioners to leverage DPaaS is to remember DBAs need to be in control of both backup and recovery, and a tool such as DD Boost helps achieve that.

Watch the full interview with Darryl Smith below: