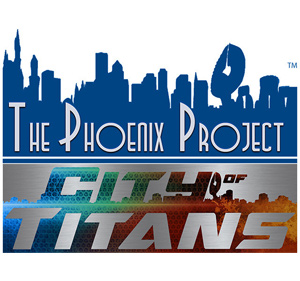 City of Titans, to-be-developed by Missing Worlds Media, has been heralded from the get-go as the spiritual successor to now-lost City of Heroes and is running a Kickstarter campaign (fully funded) that has exceeded $470,000 and still has more than ten days to go. Known originally as The Phoenix Project, CoT is a super hero massively multiplayer online role playing game (MMORPG) designed to rise from the ashes of NCSoft’s CoH now that it’s been shut down.

Sunday, I got the chance to speak with Chris Hare, City of Titans Project Lead, and William Strickland, City of Titans Lead of Composition about the expectations they see built into this stunning title.

Chris Hare also goes by “War Cabbit” and has quite a few interesting ideas on how the game should evolve from its roots and become something more than anyone has expected. Much of the conversation lit around the culture, writing, and social expectations of the game. Including how the developers want to produce an MMO game that grows with the player. William Strickland goes by “Robin” and has a lot to say about how he sees City of Titans as part of super hero gaming culture and how the game will honor its roots while reaching for the clouds.

A game that grows, encapsulates, and immerses every player in story

Hare mentioned that as the character progresses through the city, each zone will represent a change in time. Giving a presentation that as a player changes, so does their contacts. Harkening back to Batman, Gordon might start out as a beat cop, and as the player progresses through the story, he would keep getting promotions. In one zone he’d become a lieutenant, then a detective, until eventually the hero’s contact was police commissioner.

Strickland and Hare mentioned the potential addition of a moral system to the game that could decide where the player’s character sat in the spectrum between hero morality and villain criminality. Meaning that the expectation was to allow players to choose where they started—from heroic figure with good police ties, dastardly criminal villain connected to the underground, or even an unknown vigilante mercenary out for themselves. The ideal would be to allow players to choose their starting point and let their play guide their path.

Much of the stress has been placed on making sure that players find themselves immersed in the story in a unique way. They revealed that very similar to Star Wars: The Old Republic and Guild Wars 2 the player story for the first twenty levels will more likely be unique or characterized for that character until after that it starts branching out.

Bringing City of Heroes and super hero MMOs into the future

One really interesting element of the interview focused on how William Strickland never played City of Heroes. In many ways this could feel like a betrayal to the purpose to have a non-CoH veteran at the helm of the writers—but, as expected, the crew have a very good argument as to why people who hadn’t played need to have strong advisory roles: City of Titans is not supposed to be a clone of CoH it’s supposed to be an evolution.

Strickland mentioned that he’s a long-time fan of comic books, super heroes, and the genre fiction that made City of Heroes such as powerful cultural icon. As a result, he comes from the tradition that CoH played to. He has the experience of the audience who may not have gotten the chance to play CoH but would still be interested in something like City of Titans and with that he brings a special viewpoint to the table about what’s worth keeping for nostalgia’s sake and what just won’t work anymore in an MMO coming out in the mid 2010s.

Fan expectations and the future of City of Titans

City of Titans is just as the beginning of its development with the Kickstarter just barely funded. We’ve already seen some amazing artwork and the Kickstarter is constantly updating information about world building, character development, story, and mechanics.

As the development progresses, the CoT team expects to release certain portions before others. For example, City of Heroes was best known for its costume designer and in many ways this set it apart from every other superhero MMO on the market—a pang of loss certainly was felt by everyone who had spent hours meticulously making costumes. Knowing this, City of Titans will more than likely be releasing an avatar creator before even the alpha stages of the underlying game.

An excellent way for players to get a chance to cut their teeth on the game, and get those hours of preening in front of the virtual mirror out of the way before jumping into the game.

So far, according to what I heard from Chris Hare and William Strickland, City of Titans has an excited, passionate super hero team of developers who have already pulled on their boots, ironed their capes, and donned their masks to prepare the way for a game they hope will make any City of Heroes or comic book fan proud.