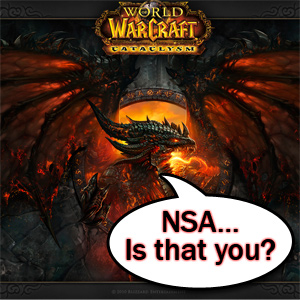 The NSA, and its UK sister the GCHQ, have both seen operatives spending long hours in front of computer screens and under headphones listening to the chatter of a million wiretaps, Skype calls, and cell phone conversations—but what hasn’t been revealed until now is how much time the spy agencies have spent in the virtual worlds of video games. Now, secret documents leaked by the infamous whistleblower Snowden have revealed the progressive push by the snooper elite into the “virtual” lives of gamers.

These files were obtained by The Guardian and are being published on Monday in partnership with the New York Times and ProPublica.

According to the files, the NSA and GCHQ have sent operatives into the strange worlds of World of Warcraft and Second Life in order to get a bead on what potential terrorists (or at least hardcore raiders) were talking about in the land of Azeroth. After all, video games have long become a powerful social tool for individuals seeking to get into the life of a supermodel, elf, or orc—and as a result, so could criminals.

“We are unaware of any surveillance taking place,” said a spokesman for Blizzard Entertainment, based in Irvine, Calif., which makes World of Warcraft. “If it was, it would have been done without our knowledge or permission.”

World of Warcraft is the largest MMO to ever be built and has seen in its heyday over 11 million players—now down to around 7 million it’s still a juggernaut in the industry.

Why spy on gamers?

Analysis of the document published by The Guardian provides a good example of the psycology of why spy agencies saw in 2008 a reason to get into the virtual world and video game gig: it’s where the people are at.

The NSA document, written in 2008 and titled Exploiting Terrorist Use of Games & Virtual Environments, stressed the risk of leaving games communities under-monitored, describing them as a “target-rich communications network” where intelligence targets could “hide in plain sight”.

Games, the analyst wrote, “are an opportunity!”. According to the briefing notes, so many different US intelligence agents were conducting operations inside games that a “deconfliction” group was required to ensure they weren’t spying on, or interfering with, each other.

If properly exploited, games could produce vast amounts of intelligence, according to the NSA document. They could be used as a window for hacking attacks, to build pictures of people’s social networks through “buddylists and interaction”, to make approaches by undercover agents, and to obtain target identifiers (such as profile photos), geolocation, and collection of communications.

The best part of the information gathered from the document is that playing in virtual worlds to gather intel on criminals and terrorists became so popular amidst the FBI, NSA, CIA, GCHQ (to name a few alphabet soup) that there became a real possibility of accidentally stepping on each others toes or spying on one another. Thus the necessity of the “deconfliction” group.

Spies go where the people are

That the NSA and other snoop organizations have fielded agents into virtual worlds such as World of Warcraft, Star Wars: The Old Republic, Guild Wars 2, and so on is not much of a surprise. After all, anyone who can join a guild or enter into a conversation in WoW can log everything that is passed to their computer (logging chat is as easy as plug-in mod in most games.)

Amid the noise of the leaked documents comes an amusing revelation: in spite of all the hacking and tapping the NSA had committed to the Internet, the agency had a great deal of trouble distinguishing traffic from MMO gaming from everything else. The result: while most communication in MMOs is plain text, the NSA needed to send agents into the virtual world in order to actually contextualize what was being said and by whom.

MMOs are like any other communication resource, criminals may use them to communicate but it’s more likely that criminals (being people themselves) play in MMOs for non-criminal reasons. The result, the NSA would argue, that getting into guilds that were thematically based on terrorist organizations, activist groups, or any particular ideological bent that might fall into the NSA’s crosshairs would draw their attention.

Agents may have fun, but agencies are going to be really bored

There’s a term from World of Warcraft that highlights why sifting through data from an MMO might be a fool’s errand if not done with some sort of understanding of the underlying culture. We call it “Barrens Chat.” In the beginning of WoW there was a zone for the Horde faction called the Barrens, it was where everyone ended up as they were working their way up the ranks, as a result, this became a hotspot and a flashpoint for rage-fueled conversation. Most of the time this conversation led to nothing more than hour-long flame-fests or toenail-curlingly bad jokes ad nauseam.

The New York Times article puts it best, trawling the forums for quotes: “If they ever read these forums,” wrote a goblin priest with the user name “Diaya,” “they would realize they were wasting” their time.”

The NSA is best known for dragnet operations that swallow entire domains of conversation whole, but in the end MMOs are going to be a mostly noise and very little signal for anyone going in without a plan (and “take everything, we’ll filter it later” is not a plan.) The FBI and CIA will probably do a lot better with their agents because they’re traditional organizations based around investigating specific instances and tracking particular people (or building assets.)

Players probably largely unaffected, just another day on the Internet

As for players—most of us who make our lives in virtual worlds have already assumed that Blizzard (for WoW), EA (for SWTOR), and Linden Lab (for Second Life) can already see what we’re saying. Even in private messages, party chat, or in dungeons. It’s not like these companies aren’t able—or willing—to store archives of player conversation and couldn’t hand it over to authorities should someone discuss criminal activity with details.

The Internet isn’t the Wild Wild West anymore in respect to knowing that what you say in WoW may not stay in WoW if Blizzard decides to pull it off the rack of some air cooled server. Certainly there’s a little bit of that uncanny feeling that you’re being watched knowing that the NSA, FBI, or CIA might have planted an agent in your guild…

Who knows, that new DPS rogue who is always falling over himself in raids and applying the wrong poison might not be a bumbling 12-year-old. NSA: In the future, if you assign an agent to watch our conversations, please send us someone who can get his rotation down because wiping on Garrosh Hellscream, former Warchief of the Horde, is just embarrassing.