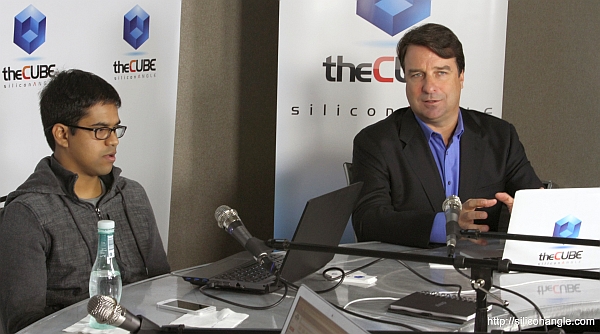 John Furrier appeared in theCUBE at BigDataSV conference in Santa Clara, California, from a slightly different angle, after trading co-hosting for the interviewee’s chair.

Dave Vellante of Wikibon did the honors of interviewing John Furrier and Dani Rayan, co founders of CrowdChat, a company looking at the confluence of some major trends: Big Data, analytics and social media, bringing them together to help people connect.

“What is CrowdChat and why did you found the company?” asked Vellante.

“We started the company a couple of years ago. We looked at social data and we saw people gathering around ideas and knowledge,” answered Furrier. “Just like we always say around here, in theCUBE, it’s all about expressing big ideas to grow and enabling conversations. The social media was growing significantly, and you could see conversations open, public and transparent; unfiltered new content, just like the web in the early days.”

As Furrier explained, “the social media market place was growing and there was a need for tooling and automation to 1) generate conversation and 2) finding people. CrowdChat was the beginning of a data science project that we started a couple of years ago around using algorithms and proprietary technology that we built around identifying affinities and finding people of interest that aren’t yet your friends.”

When Rayan and Furrier showed their alpha-beta project to people they were blown away, and the number one question they received was regarding the way to use all that information. So the next step was building the CrowdChat platform, centered around the hashtag, working on all social networks.

“We are passionate about the democratization of media and opening up voices,” said Furrier.

Rayan left Riot Games to found CrowdChat with John Furrier, after they met at Cloudera and found out they shared mutual interests. They noticed the importance of the hashtag (used by Twitter, Facebook, Instagram and Tumblr). It sort of led to the reinvention of group communication. As they pointed out, nowadays every TV show has a hashtag, and even the Super Bowl has a hashtag, joining a media rich conversation.

“On CrowdChat.net people can create a chat. We are targeting community managers; right now, the early adopters, the core audience, is folks who have communities and want to engage. It is very effective because it generates real content real fast,” explained Furrier. “The idea is to get a coherency around readability, searchability, discoverability and around large scale group conversations.”

Talking about the early adopters, Furrier was pleased to announce that IBM, EMC and Palo Alto Networks are already using CrowdChat, with interest surging in Hollywood.

“The trend is moving from static to dynamic,” said Furrier. “The hashtag has created a dynamic environment rising the opportunity to unify the crowd and create action.”

That action could be anything from selling a product or educating someone, could be an executive taking an hour of his time to answer “Ask me anything” type of questions, taking advantage of the dynamic nature of social.

“We are reinventing the way people communicate on Forums,” added Dani Rayan. “Forums have not been reinvented since the 90’s.”

Rayan walked the viewers through a live demo and explained some of the secret sauce of CrowdChat. To view it, watch the entire segment below.