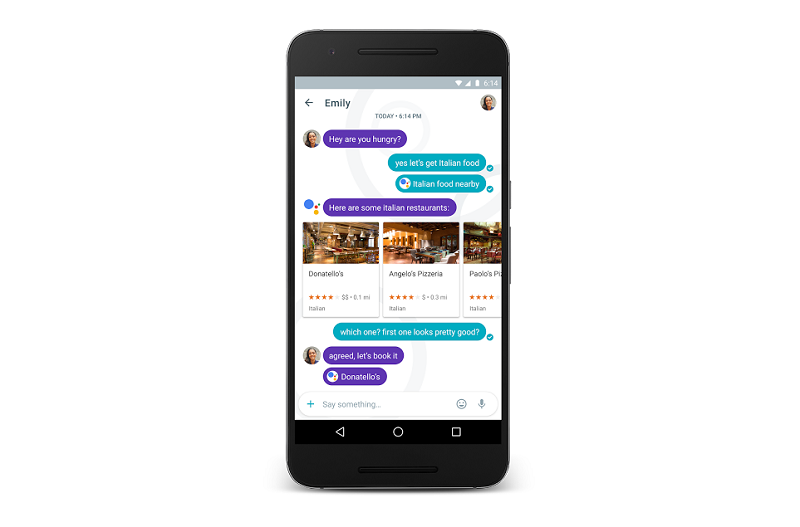 We look at the features you can expect to see from Allo when it becomes available in the summer.

Built-in Smart Reply does the messaging for you

Similar to the functionality introduced for Inbox in November, Allo comes with Smart Reply allowing you to use the suggested responses rather than typing a single word. Over time, the Smart Reply feature will learn to provide suggestions that better meet your style. If someone asks “Dinner later?”, Smart Reply will instantly provide suggestions like “I’m busy” or “I’m in.” In addition, Smart Replies can also include emojis and stickers.

What makes the Smart Reply feature unique is its ability to also work with photos, providing intelligent suggestions based on the photo’s content. If your friend sends you a photo of tacos, Smart Reply provides suggestions like “Yummy” or “I love tacos”. Whether you receive a photo of food, your friend’s dog or kid, Smart Replies will be able to recognize the content and provide a quick response.

At Google I/O the company also unveiled a massively upgraded version of Google Now called Google Assistant, which is also incorporated into their messaging app, Allo. Google Assistant works in a similar way to the chatbots proposed by Facebook and Microsoft. Where it differs though is Google Assistant seems to be more automated.

As shown in the GIF, if a user suggests heading out for Italian food, Google Assistant will automatically provide you with restaurant suggestions. Opting for one of the choices will provide you with the Smart Reply options to call the restaurant, see their opening hours, or simply make a booking via OpenTable.

During a conversation, you can also access Google Assistant by tapping @google where you can use Google Search to find GIFs, images or videos. You can even play games with Google Assistant in Allo, like Emoji Games, which requires you to guess a movie based on a selection of emojis.

You can also chat directly to Google Assistant in Allo and get updates about your day’s agenda, check flight or hotel details, and more.

Allo’s other smart features, including Whisper Shout and Ink

Allo’s other features include the ability to doodle over photos like you can on Snapchat. While the Whisper Shout feature allows you to convey the tone of your message. The sliding volume bar scale allows you to make your words small (whisper) or large (shout) before you send your message.

To ensure your chats remain secure Allo has also created an Incognito mode, which brings both end-to-end encryption and discreet notifications to your Allo chats. Allo will run on the same encryption technology, called Open Whisper, used by Whatsapp. However, unlike Whatsapp who completed its rollout of end-to-end encryption last month and has made the feature a default for all users, Allo’s Incognito mode won’t be encrypted by default. Allo users will be able to switch between an unprotected channel and an encrypted one, raising concerns about security.