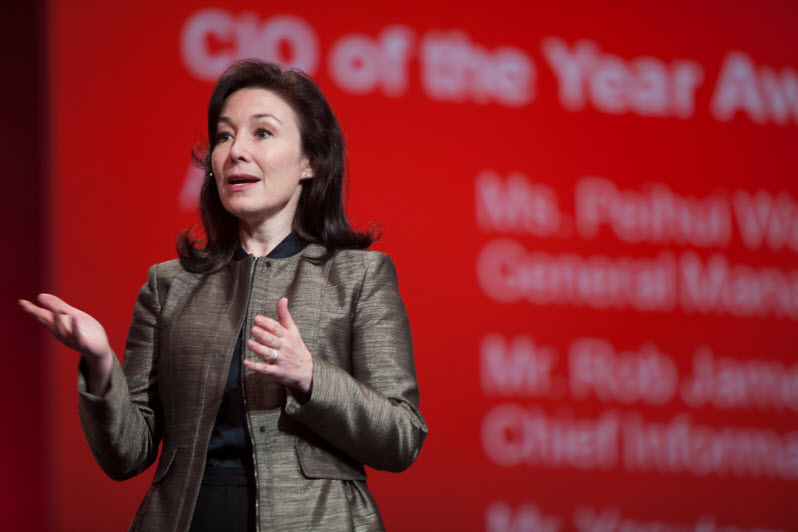 Oracle continues to baffle its critics, thanks largely to a surge in its cloud computing business.

Despite a late start in cloud computing, open-source competition and, most recently, allegations that it misrepresented cloud revenues, the company again beat Wall Street sales and earnings estimates in its fourth fiscal quarter.

Not that Oracle isn’t facing the same headwinds that have buffeted other data center stalwarts like IBM, Hewlett Packard Enterprise Co. and EMC. Revenues from new software licenses fell 12 percent in the quarter.

But Oracle seems to be managing expectations better than some rivals. The company reported a quarterly profit of $2.81 billion, or 66 cents a share, up from $2.76 billion, or 62 cents a share, a year earlier. Revenues came in at $10.59 billion, compared to Wall Street consensus estimates of $10.47 billion. Oracle shares rose a little under 2 percent in after-hours trading this evening after a half-percent rise in today’s market.

Oracle said it added more than 1,600 new SaaS and more than 2,000 new PaaS customers during the quarter. Gross margins of 56 percent in those businesses are higher than most of Oracle’s competition, according to Oracle CEO Safra Catz (above), who said growth is accelerating. She also said the company’s accounting on cloud revenues is “100 percent accurate, and if anything, slightly conservative.”

“Bookings in Q4 were very strong, enabling us to raise our guidance for Q1 SaaS and PaaS revenue growth, which we now expect to be between 75 percent and 80 percent,” she said. And in a shot at rival Salesforce.com Inc., Oracle Executive Chairman and Chief Technology Officer Larry Ellison said the company has “a fighting chance to be the first cloud company to reach $10 billion in SaaS and PaaS revenue.”

That’s an impressive statement, considering that Oracle’s competitors had a considerable head start. The number indicate that Oracle is responding effectively to pure-play SaaS competitors like Salesforce and Workday Inc. while navigating the transition in its business from license sales to subscriptions. SaaS revenues are typically smoother and more predictable than licensing deals, but the model shift can be tricky for companies that have been accustomed to getting large revenue bumps from closing big new deals.

Analysts – more than half of whom rate Oracle stock a “buy” – are also impressed with Oracle’s cost discipline in the fact of the shift to cloud. “Pivoting to the cloud is a long and pricey process,” wrote Dan Burrows on Investor Place. “Transitioning away from software licenses to cloud services requires a vast investment in data centers, for one thing.” Despite those costs, Oracle’s operating margins stayed flat with the prior year at 37 percent.

Oracle has grown earnings per share for the past several quarters, suggesting that the company is actually becoming more profitable as it shifts to the cloud. Given that subscription pricing is considered to be a better business in the long run, this indicates that Oracle is close to turning the corner on its revenue mix without suffering the big hits that have plagued its peers. How long it can keep the magic going is anybody’s guess.