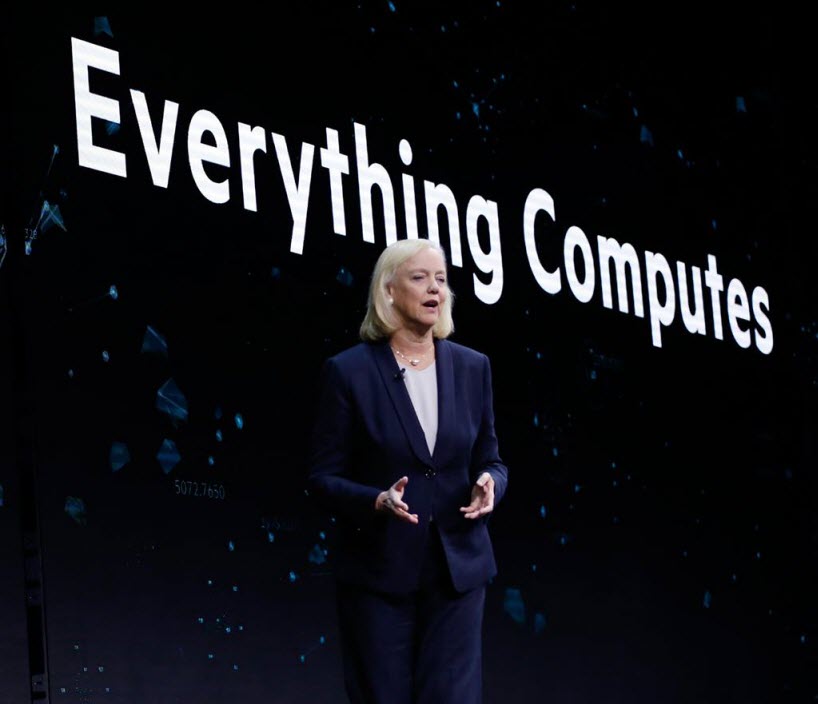 HPE meets lowered expectations as execs insist worst is over, but investors not so sure

The word “down” appears 21 times in Hewlett Packard Enterprise Co.’s fiscal second-quarter earnings release, which gives you some indication of the challenges the company faces.

HPE’s results were expected to be dismal, and the company surprised no one with earnings that met Wall Street expectations on a 13 percent plunge in revenue compared to the same quarter last year. About the only positive news was that net revenues of $9.9 billion slightly exceeded consensus estimates of $9.64 billion, and that the company reaffirmed its earnings guidance for the rest of the year.

Exact comparisons to last year’s figures aren’t practical because HPE completed the sale of its services business to Computer Sciences Corp. just last month, shedding 100,000 employees in the process. In after-hours trading, the stock declined a little more than 2 percent.

Update: Investors who slept on it woke up in an even worse mood, knocking shares down almost 7 percent Thursday despite a big up day for the overall market. Barclays analyst Mark Moskowitz said in a note to clients Thursday that consensus estimates are likely to come down thanks to “discouraging and widespread” revenue declines. “This maelstrom presents an opportunity for long-term and value-based investors to take profits in a more meaningful way as the napkin-math financial engineering of the spins gives way to the reality of a legacy asset being hit by the cloud and increasing competition,” he wrote, adding that HPE may be losing market share to Dell Technologies Inc. in servers and NetApp Inc. and Pure Storage Inc. in storage.

HP executives were customarily upbeat on the company’s earnings call, however, saying that the contraction in its was a holdover from the massive restructuring the company kicked off beginning in November 2015, when it separated from HP Inc. “We think Q2 is going to be a low point,” said Chief Financial Officer Tim Stonesifer. “We expect a return to growth in the latter part of the year.”

For the second straight quarter, the company blamed a sudden drop-off in sales to a single “tier 1 service provider” customer for part of its revenue declines. Executives also cited high memory costs and lingering divestiture expenses as factors.

HPE’s Enterprise Group, which delivers 80 percent of total revenues, saw sales decline 13 percent year-over-year and 7 percent when adjusted for divestitures and currency. Software sales were $685 million, down 11 percent. Revenues continue to slide at an increasing rate; they’ve declined in each of the last three quarters.

The falloff was evident across the board in traditional enterprise product lines. Server revenue was down 14 percent, storage sales fell 13 percent and networking revenue dropped 30 percent, despite the much-publicized success of the company’s Aruba wireless business. Regionally, the Americas saw an 8 percent adjusted revenue decline while Europe/Middle East/Africa was off 3 percent and Asia/Pacific was down 2 percent. HPE also recorded negative cash flow in the quarter.

Sounding at times more like a smokestack company than a technology giant, executives said they expect to take out between $200 million and $300 million in costs in the second half alone. They also pointed with pride to the company’s return of $777 million to shareholders in share repurchases and dividends in the quarter, a tactic that is more typical in industrial firms than in high tech. Part of the reason: Free cash flow was better than expected.

Stonesifer said the spinout of HPE’s services business to CSC closed on schedule and within budget, and that the sale of the software business to Micro Focus International plc is also tracking to close on schedule on Sept. 1.

It’s been 18 months since HPE and HP Inc. split up, and so far the biggest beneficiary of that appears to be the personal computer business. HPE said at the time that shedding its consumer businesses would enable it to focus better on the enterprise business, “but there’s little evidence of that occurring,” said Charles King, president and principal analyst at Pund-IT Inc. “So far, the news has been pretty grim.”

HPE has cast its lot with becoming an infrastructure hardware vendor, and “I have trouble imagining how that will work, given the thinness of the company’s software portfolio and the long-time weakness of its services offerings,” King said. One of the bright spots in the quarter was this month’s announcement of significant progress toward “The Machine,” a new computing architecture that addresses memory on a massive scale.

The Machine is interesting technology, but HPE’s ability to build a business on it is still a toss-up, King said. “That’s a very big gamble to base your future on.”