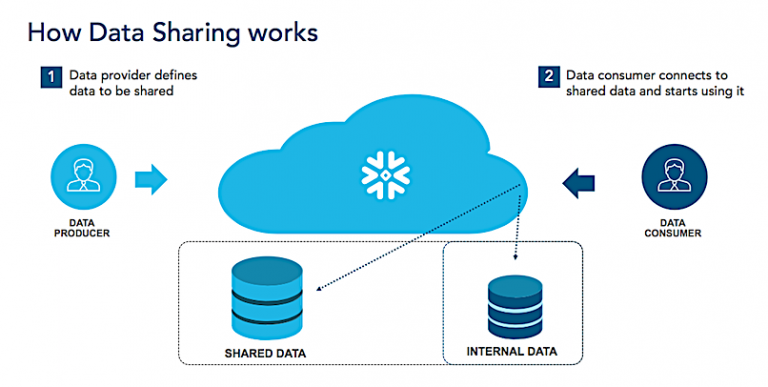 Even in the dawning cloud computing era, where so much data is ostensibly easy to access, sharing critical business data among companies is still surprisingly hard. That’s the problem Snowflake Computing Inc. aims to solve with what it calls a “data sharehouse.”

The San Mateo, California-based startup today announced its neatly named new offering as a free add-on to the data warehouse it built for cloud computing. Now companies using Snowflake’s technology, officially called Snowflake Data Sharing, can share any part of their data warehouses, subject to defined security policies and controls on access, with each other.

“Everyone out there has to use a patchwork of approaches,” said Jon Bock, Snowflake’s vice president of marketing. Those approaches include file-sharing, electronic data interchange, application programming interfaces and email, but all of them have issues ranging from lack of security to cumbersome methods of providing data access to the right people.

Snowflake’s data sharehouse allows companies to provide direct access to structured and unstructured data without the need to copy the data to a new location. Bock compared the difference in data sharing on Snowflake versus other methods to the difference between streaming music and compact discs. “It looks [to the data recipient] just as if the data resides on their own data warehouse,” he said.

The company said its sharehouse opens up new possibilities for the use of data, potentially turning into a more concrete asset that can be valued based on what it’s worth to each sharing partner. For instance, Snagajob, which connects some 75 million hourly workers to the company’s employer subscribers, is looking at using Snowflake to share data with customers that want to do analytics on previous hiring activities.

Other use cases include the ability to streamline operations thanks to lower data friction and creating a “single source of truth” by sharing data among siloes. “Everyone has been trying to get value out of data for the past 10 years or more,” Bock said. “This opens up a whole new set of opportunities.”

There’s something of a catch, which is also a customer acquisition tool for Snowflake: Both companies that want to share data this way need to use the Snowflake data warehouse. It’s surely no accident that the sharing feature, as Bock said, “has caused companies to become Snowflake customers.”

“The data is already in the cloud, so conceptually it’s a no-brainer,” said Tony Baer, principal analyst at Ovum. “It’s a great idea and they’ve got the pieces to start providing value on day one.”

But he said that to scale up to many businesses sharing data with each other, Snowflake needs to provide better access management tools, probably through partners that already do things such as role-based access control.

Snowflake, which competes with traditional data warehouses from the likes of  Teradata Corp., Hewlett Packard Enterprise Co.’s Vertica Systems, and IBM Corp.’s Netezza, has been on a roll, raising $100 million in a Series D funding round in April. Chief Executive Bob Muglia, a former longtime Microsoft Corp., said then that the company had doubled its customer base and quadrupled data storage last year.