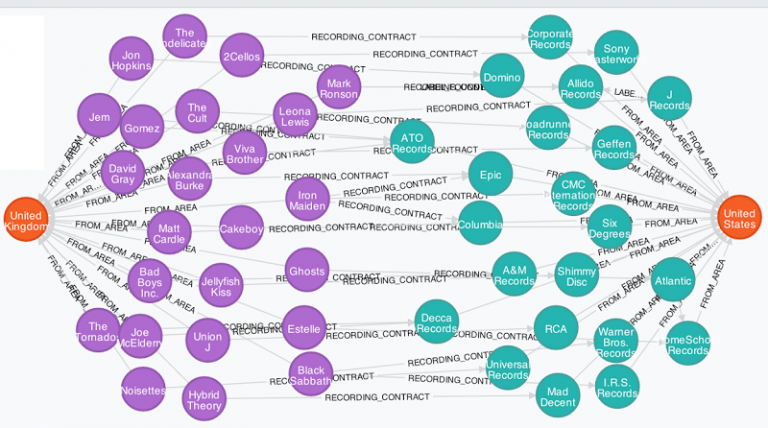 In a bid to make graph databases more accessible, Neo4j gets a revamp

Bidding to keep its market-leading graph database engine out in front against new competition,  Neo Technology Inc. today is unveiling an integration and visualization layer on top of its platform that adds analytics, data import/transformation, visualization and data discovery to its core engine.

The Native Graph Platform is said to make it easier for non-graph database experts to access the distinctive graph features of the Neo4j engine.

Graph databases are a type of NoSQL database that represent data as objects called nodes, edges and properties. Rather than storing information in rows and columns, graph databases manage unstructured data as connections between objects. “Because graph databases track connections among entities and offer links to get more detailed information, they are well-suited for scenarios in which relationships are important, such as cybersecurity, social network analysis, e-commerce recommendations, dependence analysis and predictive analytics,” Forrester Research Inc.’s Noel Yuhanna wrote in a 2015 report.

Other common scenarios include fraud detection and recommendation engines. However, the data structure of graph databases is different from that of the relational kind, making them an awkward fit in many enterprises. That’s a problem Neo is hoping to address with the new version.

The new Native Graph Platform applies a connection-first approach to data query, visualization and analysis data to make graph technology meaningful to a broader range of users. The new version boosts performance as much as 55 percent over the previous release through expanded use of native indexing, a refactoring of the native Cypher query interpreter and faster write and update performance.

In addition, server-to-server encryption plugs a security hole that was seen as a weakness of previous editions. There’s also an extract/transform/load function available on a preview basis that reveals data connections and materializes them across a variety of relational sources and raw data formats in such formats as Hadoop.

Advanced analytics for artificial intelligence enables data scientists to use Neo4j’s graph algorithms in developing AI logic, while also using the graph-specific Cypher query language on Apache Spark as a means to traverse large data sets as graphs.  Business users can also now visualize, understand, analyze and explore their graph data through partnerships with other vendors, the company said.

Neo Technology also said it has donated an early version of Cypher for Apache Spark to the openCypher project, a community effort to build an open-source version of Cypher for creating graphlike queries against graph and nongraph engines. The company said its contribution is expected to make “it easier to bring graph algorithms to bear, dramatically broadening how they reveal connections in their data.

“Until now, the full power of graph pattern matching has been unavailable to data scientists using Spark or for data wrangling pipelines,” the company said in a statement. “Now, with Cypher for Apache Spark, these data scientists can iterate [more easily] and connect adjacent data sources to their graph applications much more quickly.” Graph queries can operate over the results of other graph queries, and an application program interface enables graphs to be split, transformed, captured in snapshots and linked together in processing chains.

Neo4J, which was developed in Sweden and first released in 2010, comes in community, enterprise and government editions. The company claims millions of downloads of its community edition, and it has raised more than $80 million in venture capital. Pricing of the new version wasn’t disclosed.