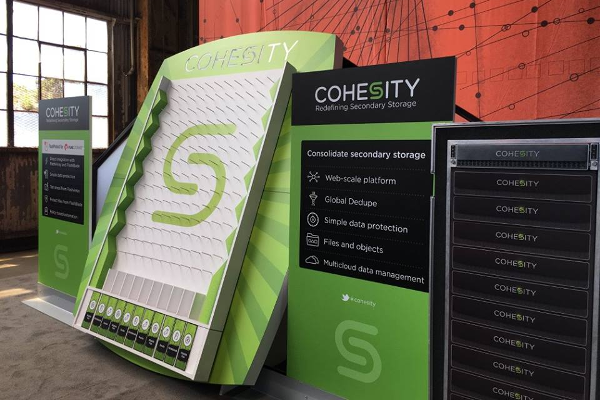 The investment is touted is the biggest received by a U.S.-based enterprise software startup in the last 18 months. It also marks only the second occasion that SoftBank has invested in this segment since closing the $100 billion Vision Fund last year. The Japanese carrier was joined by more than a half-dozen institutional investors in the new round.

Cohesity will use the capital to scale up its operations. The San Jose, California-based startup sells a software platform for managing the so-called secondary data that takes most of companies’ storage infrastructure. This includes backup copies of files, copies of copies, archived documents and other auxiliary records.

The startup’s platform allows companies to store all these items in one place. Because everything is centralized, it’s easier to find and delete redundant data than if the information were spread out over multiple different systems. Less data, in turn, means that enterprises have to spend less on storage hardware.

Customers have several options for deploying Cohesity’s platform. The software can run in the public cloud, on traditional on-premises virtualized infrastructure and as part of preconfigured appliances.

Cohesity offers its own ready-made appliances, as well as offerings from partners. The startup has two such hardware partners in particular: Cisco Systems Inc. and Hewlett Packard Enterprise Co., both of which participated in its funding round alongside SoftBank.

The cash infusion follows two quarters in which Cohesity claims to have added more than 200 new customers. Notable adopters include the San Francisco Giants, the U.S. Air Force and Schneider Electric SE. This growth seems to indicate that Cohesity has managed to maintain the momentum it experienced during 2017, when it claims to have seen revenue jump 600 percent, though on an undisclosed base.

The startup has raised a total of $410 million from investors since hitting the scene in 2013. It previously raised $90 million in April 2017 from a consortium led by Alphabet Inc.’s GV venture capital arm.