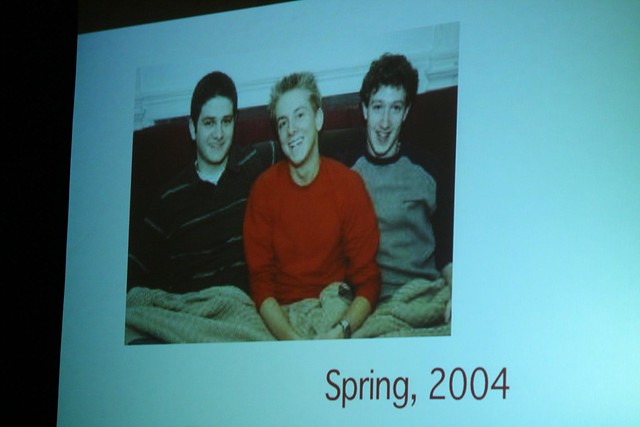 “It is time to break up Facebook,” company co-founder Chris Hughes wrote in an explosive and lengthy op-ed published by the New York Times on Thursday.

In the first few paragraphs, Hughes (pictured, center) talks about his friend and co-founder Mark Zuckerberg, seeming to want to humanize him in contrast to the Facebook chief executive’s Zuckerborg reputation.

“Mark is a good, kind person,” wrote Hughes. He said his friend had crushes on girls and slept on floors while at university, but now he has unchecked power over social media platforms that can affect the way we think, influence elections and manipulate the zeitgeist. “Mark’s power is unprecedented and un-American,” said Hughes, calling for an end to the one-man-controlled monopoly.

Hughes said when he and Zuckerberg started the company, they had no idea of the influence it could possibly have, but after these last two years of one scandal after another and the revelation, to some, that privacy has been overlooked or abused, it’s time to act.

“Facebook so dominates social networking, it faces no market-based accountability,” said Hughes. “This means that every time Facebook messes up, we repeat an exhausting pattern: first outrage, then disappointment and, finally, resignation.”

Hughes said that when Zuckerberg talked about “domination” in the early days within the social networking space, he meant it. Dominate it did and, according to Hughes, the government and its agencies just watched as the monolith of Facebook cast a shadow over a good portion of the world. If a competitor comes along, he wrote, “Facebook will copy its innovations, shut it down or acquire it for a relatively modest sum.”

“I don’t blame Mark for his quest for domination,” Hughes went on, saying that his former colleague has only proved he’s an exceptional entrepreneur. But, he says, the government should never have allowed the “leviathan” to keep marching forward. Facebook should never have been allowed to acquire WhatsApp or Instagram, but the government just turned a cheek, in his view.

Moreover, he wrote, given that Facebook is the go-to platform for billions of people, Zuckerberg controls a kind of global soapbox. “There is no precedent for his ability to monitor, organize and even censor the conversations of two billion people,” said Hughes.

In a nutshell, he said, the empire needs to be broken up. “Imagine a competitive market in which [Americans] could choose among one network that offered higher privacy standards, another that cost a fee to join but had little advertising and another that would allow users to customize and tweak their feeds as they saw fit.” That would spur competition and create higher standards, he argued.

“This movement of public servants, scholars and activists deserves our support,” Hughes concluded. “Mark Zuckerberg cannot fix Facebook, but our government can.”

The empire quickly struck back, with Facebook spokesman Nick Clegg saying the company agrees that with success comes accountability, but added, “You don’t enforce accountability by calling for the break-up of a successful American company. Accountability of tech companies can only be achieved through the painstaking introduction of new rules for the internet. That is exactly what Mark Zuckerberg has called for.”

Adam Mosseri, former Facebook News Feed boss and now Instagram head, joined Clegg, saying, “Regulation is important and necessary, but I’m not convinced breaking us up is the right path.” He added that he “would love to chat about it if you’re open.”

Such sentiments will fall on deaf ears of some politicians, who agree with Hughes. U.S. democratic senator Richard Blumenthal has publicly said Facebook should be under investigation right now by Justice Department for antitrust breaches.

Perhaps the most outspoken politician for breaking up tech monopolies is Democrat presidential candidate Elizabeth Warren, who tweeted after Hughes’ missive was published, “They’ve bulldozed competition, used our private info for profit, hurt small businesses & stifled innovation.” She left the hashtag #BreakUpBigTech. Representative Ro Khanna agreed, saying Facebook should never have been allowed to buy Instagram and WhatsApp and going forward such deals need to be more closely scrutinized.

Other have criticized Hughes for his solution to how free speech on social media should be moderated, which Hughes accepts is a contradiction in terms, but he contends there must be standards. Those standards, wrote Hughes, should be out of Facebook’s hands and regulated by government agencies and the courts.