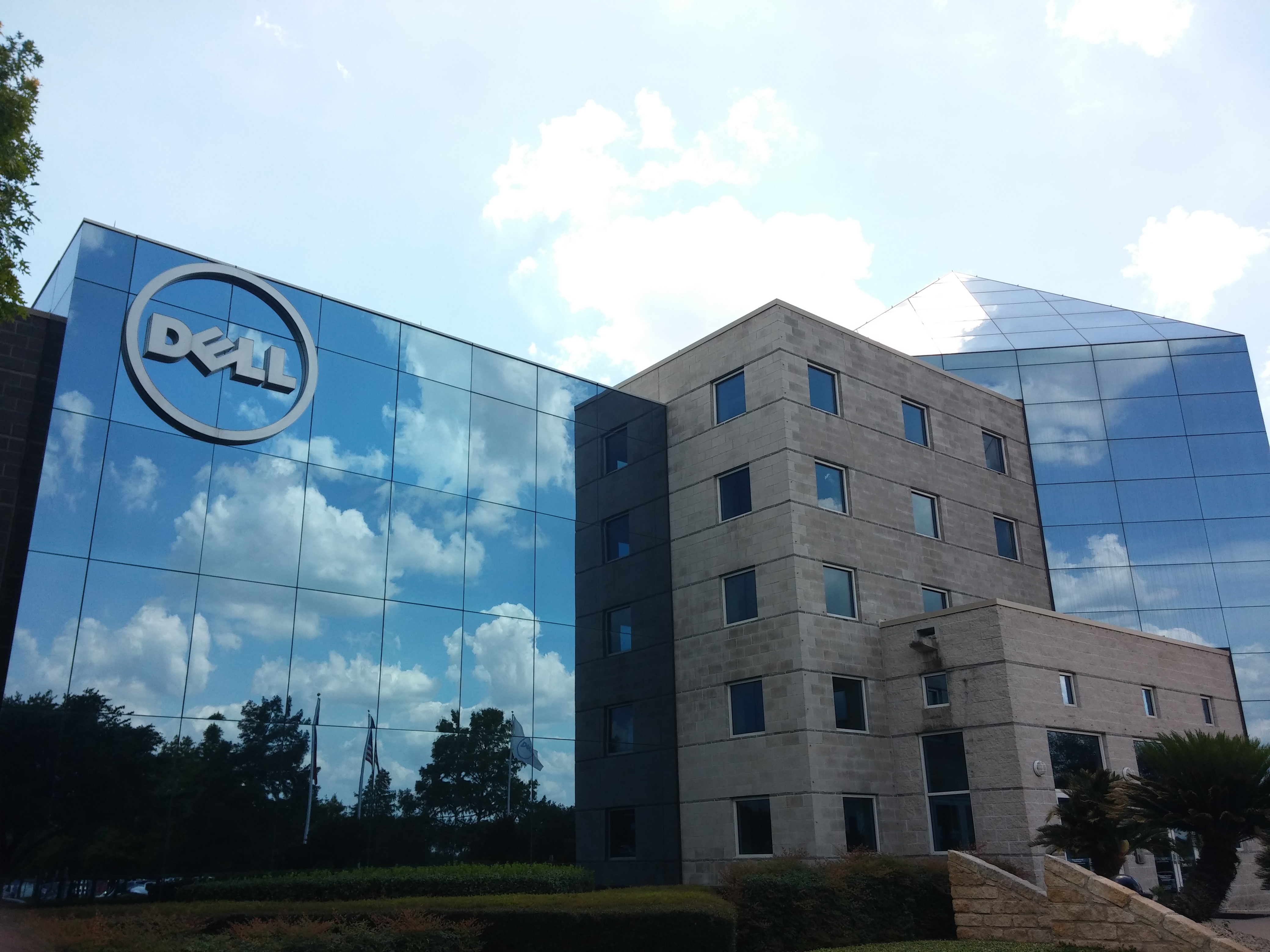 More than four years have passed since Dell Technologies Inc. announced its intent to acquire the data storage company EMC Corp. in a blockbuster $67 billion deal. During that time the company has successfully transformed itself from one that was largely becoming irrelevant to CIOs, into one of the most dominant players in enterprise technology today.

But Dell still has some serious challenges to overcome if it’s to maintain its dominant position, what with the unstoppable rise of cloud computing, its complex portfolio of overlapping products and reduced spending for on-premises infrastructure putting it under pressure to keep making gains in market share. And question marks hang over its ability to innovate.

One of the biggest takeaways from that event is the steps taken by Dell to simplify its product portfolio. That initiative is being driven by Jeff Clarke, Dell’s vice chairman of products and operations, who said at the event he’s overseen a reduction from 88 platforms to just 20 product families. Vellante said in his analysis that it’s important for Dell to do this because customers don’t like having to pick and choose between different, often overlapping products.

“The megalaunch product du jour worked for EMC and it allowed them to carry on for another five or six years after the downturn, but the lack of integration eventually caught up to them,” Vellante said. “And it will always catch up to large companies that rely on either lots of mergers and acquisitions, or spinning out new products with lots of overlap.”

The other main takeaway from the analyst event is that Dell’s cloud strategy is finally coming into focus, something that’s also crucial as the company doesn’t provide any public cloud infrastructure of its own. As a primary provider of on-premises hardware, Dell’s strategy is based on the assumption that the enterprise technology world is going hybrid, so it’s focused on selling infrastructure both to the second tier cloud providers and to enterprises that will continue to run some workloads inside their own data centers. Luckily, it has a big advantage here due to its close relationship with the software virtualization giant VMware Inc., in which it owns a majority stake since acquiring EMC.

“VMware is not only Dell’s piggy bank, but it also gives Dell strategic levers with CIOs and partners like, for instance, Amazon Web Services,” Vellante said.

He added that it’s too early to tell if Dell’s cloud strategy will ultimately be successful, though it’s really the company’s only viable option at this time.

Another key opportunity for Dell is the emergence of “edge computing,” in which data is increasingly being analyzed on-premise at the edge of the network, on factory floors and mobile devices and so on.

“The big picture is the data sphere is going to grow to 175 zettabytes, and half of that is going to be created at the edge,” Vellante said paraphrasing Clarke. “Of that, 30% is going to require real time processing.”

Overall, Dell’s business is going reasonably well. During the event, Clarke pointed to some impressive market share gains Dell has made over the last few years, particularly in the PC, storage and server markets. For example, Dell has gained 600 basis points in PCs over the last six years and 375 basis points in the storage market over the past two years. 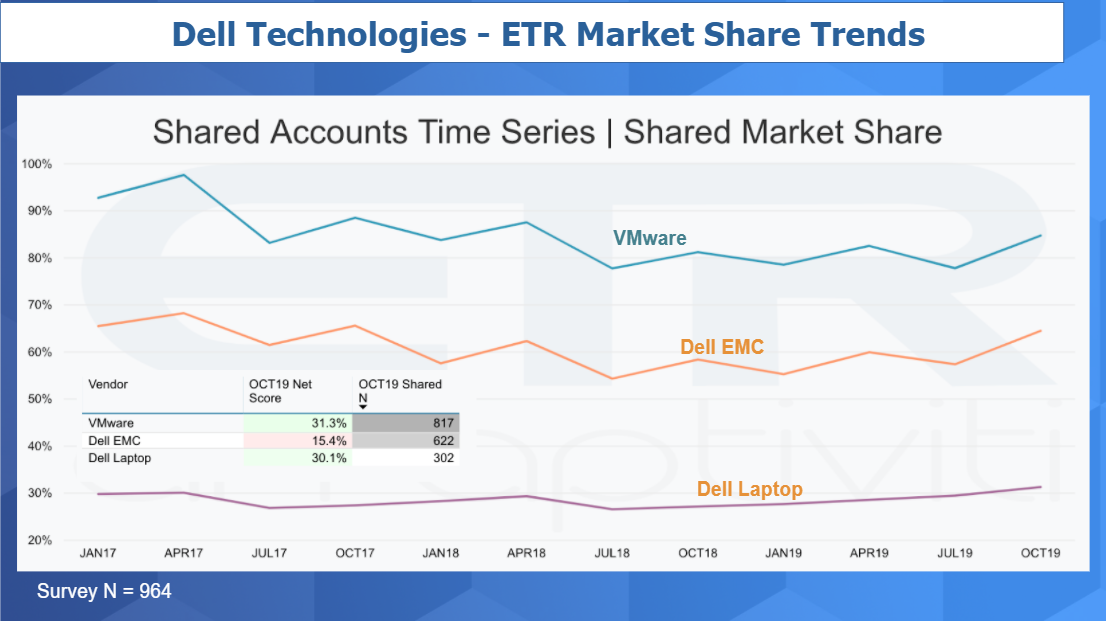 “Share gains are critical to Dell’s strategy, especially because the cloud is taking so much share of wallet in the enterprise,” Vellante said.

But Dell is doing much better in some areas than others. In the video, Vellante cited spending data from Enterprise Technology Research that shows that while its laptop business is humming along nicely, its server, storage and networking products are all suffering even as they gain market share.

The reasons for this are twofold, Vellante said citing ETR Data. “One of the biggest challenges for Dell is that enterprises are generally adopting less new technology and becoming more circumspect generally.”

“There’s less experimentation going on with the digital initiatives which started back in 2016,” Vellante said. “So, you’re seeing fewer adoptions of new tech as customers start placing their bets, and they’re retiring legacy systems that they were keeping on as a hedge. They’re narrowing their spend on the new stuff and unplugging the stuff they don’t need anymore.”

Dell is also struggling as more enterprise spend goes to the cloud in general, Vellante said. Looking at the ETR data, he noted that Dell is particularly struggling among cloud spenders in servers and storage. Dell’s server business had a net score, which is a measure of how much enterprises are planning to spend on its gear versus what they spent in the past, of 16%, down from 24% one year ago. Similarly, its net score for storage is down from 22% to just 5% now.

Perhaps the biggest challenge Dell is facing right now is its ability to innovate, Vellante said. Although the company has spent billions of dollars on research and development, the problem is that most of the innovation in tech right now is being driven by developers rather than companies. But Dell doesn’t have much appeal within the wider developer community, Vellante said.

“Just as Dell has become relevant to CIOs, it needs a similar type of relevance with the developers,” Vellante said.

Dell is trying to address this through VMware and its acquisition of Pivotal Software Inc., which makes the popular Cloud Foundry application development platform. But Vellante said that probably isn’t going to be enough, and instead, Dell should leverage its large base of engineering talent to develop more open-source tools and technologies for the developer community. It could then take this further by building applications and tools developers will need to tackle new and emerging trends such as the edge, multicloud and multicloud management.

“I would open-source that work and make a big commitment to the developer community, big contributions,” Vellante said. “Then I would build hooks in from my hardware into these tools to make my hardware run better, faster, cheaper on these systems.”