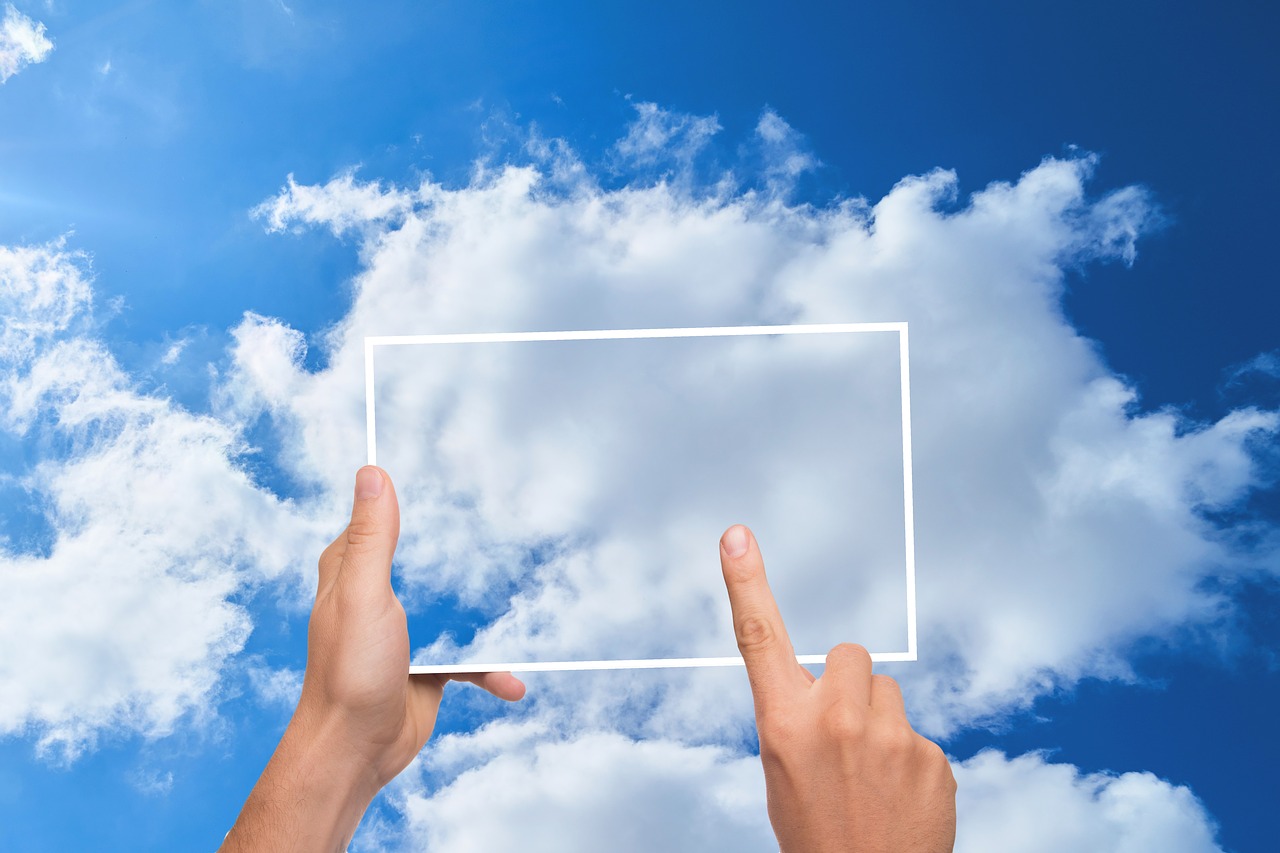 Alphabet Inc.’s decision to break out revenue numbers for Google LLC’s cloud business for the first time has put the cloud computing industry back into the spotlight.

Google is still way behind market leader Amazon Web Services Inc. in terms of overall cloud revenue, but the numbers show that its business is growing faster. Still, AWS continues to maintain an impressive growth rate itself, while Microsoft Corp.’s Azure cloud seems to have more momentum than either of its rivals, according to its latest spending data from ETR.

Dave Vellante, chief analyst at SiliconANGLE sister market research firm Wikibon and co-host of SiliconANGLE’s video studio theCUBE, took a deeper look at the state of the cloud market in his latest Breaking Analysis video, digging into the business results and momentum of the “big three” U.S. cloud players.

One thing to note when considering the rivalry among AWS, Microsoft and Google is that all three companies are approaching the cloud from a different perspective. And it’s AWS that has what is probably the most straightforward approach. As Vellante notes, AWS sees itself first and foremost as a platform for building applications.

“It’s not a SaaS [platform], it’s not a platform which AWS can use to sell its software packages, it’s a place to build applications,” Vellante said, citing comments made AWS Chief Executive Officer Andy Jassy in an interview with SiliconANGLE last year. “Any application. Any workload. Anyplace in the world. So when I say AWS has clean numbers its because they have a clean business. Infrastructure is what they do. Period.”

“The key here is they define cloud to their advantage, which is smart, trying to differentiate with a multicloud, any-cloud, any-edge story,” Vellante said.

As for Google, a good deal of its cloud revenue comes from its G Suite productivity tools, which include Google Docs, G Drive and Sheets. Google Cloud also has a strong focus on infrastructure and analytics services. 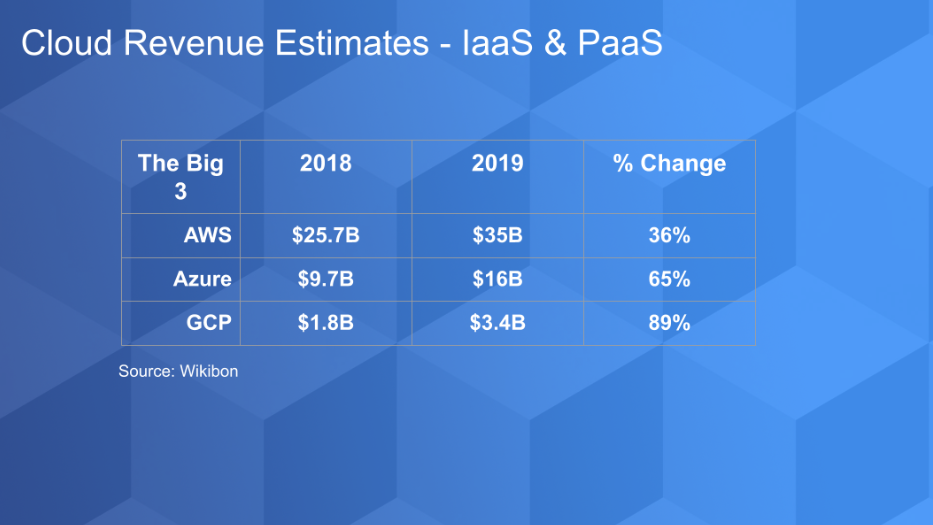 There’s no doubt that AWS’s cloud is the biggest overall. Data from Wikibon (above) shows that AWS pulled in around $35 billion in infrastructure-as-a-service and platform-as-a-service revenue in 2019, up from $25.7 billion a year earlier. That represents growth of 35%, slower than a year before but still very healthy. More important is that AWS is poised to hit a $50 billion run rate this year, which would make it a larger business overall than Oracle Corp., Vellante said.

Wikibon’s data for Microsoft and Google is a bit more presumptive since neither company is that transparent, but in any case both companies seem to be performing very well. Microsoft’s estimated Azure cloud revenue topped $16 billion in 2019, up 65% from a year earlier. Meanwhile, Google’s cloud business grew 89% in the last year, hitting $3.4 billion in revenue, according to Wikibon’s estimates.

All three companies are growing well, and that’s not really a surprise considering how profitable the cloud business is. The following chart shows a very basic view of the economics of the different sectors in the technology business, including hardware, software, services and outsourcing, both precloud and postcloud era. 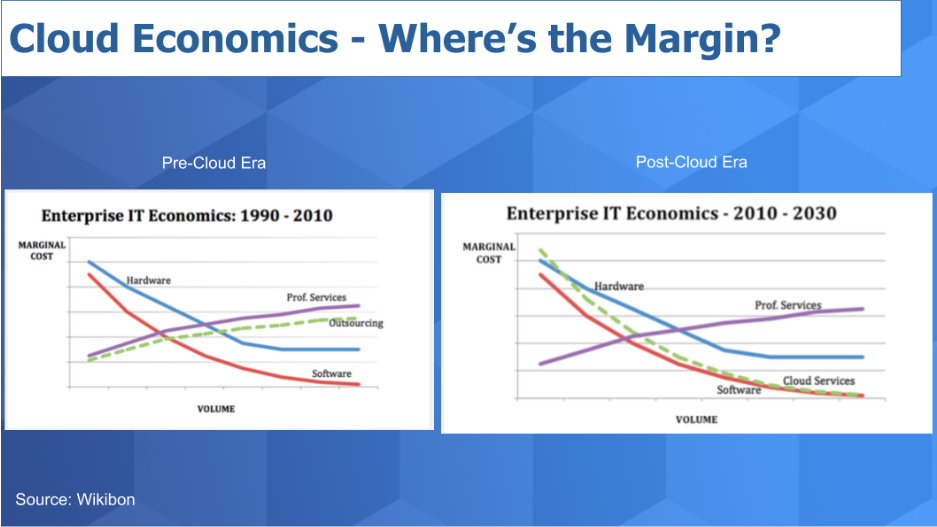 The chart shows how the hardware business has economies at volume, though marginal costs, which are the incremental costs of producing one additional unit of a product or service, plateau over time because of the need to purchase and assemble the various components of that hardware. Professional services have diseconomies of scale because “things get more complex, meaning more overheads” as volume increase, Vellante said. Then there’s software, where marginal costs almost go to zero as the volume increases.

The real difference between the precloud and postcloud era is in outsourcing.

“In the precloud era, outsourcing companies could get some economies but it really wasn’t game-changing,” Vellante said. “But in the postcloud world the hyperscalers are driving automation. The point is gross margin on outsourcing IT to a cloud player is far more attractive to the vendor at scale.”

Enterprise Technology Research’s most recent spending velocity data for the cloud computing sector shows that AWS, Microsoft and Google are all major revenue magnets. ETR’s data ranks the big three cloud players according to their “Net Score,” which is a measure of spending velocity that takes into account whether a customer is planning to spend more or less on a particular vendor. 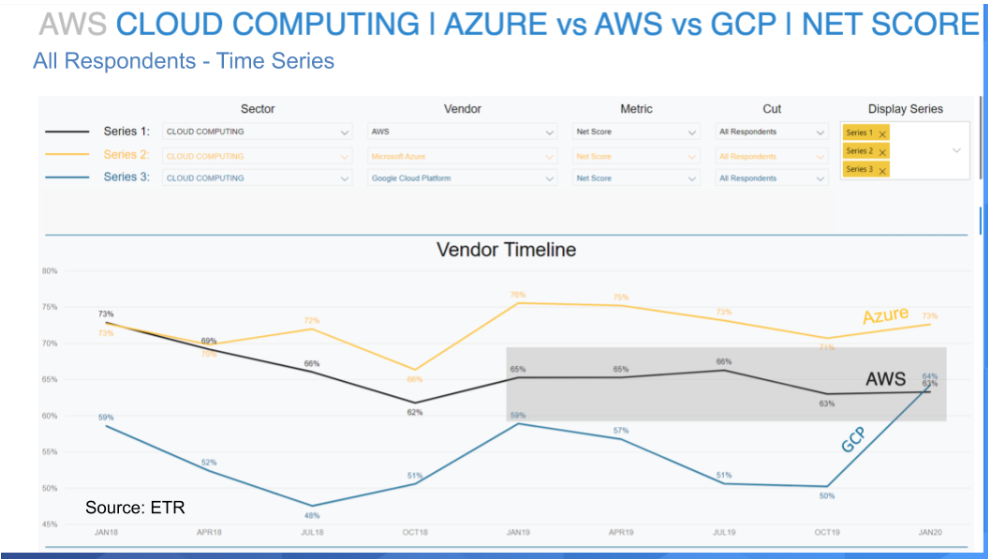 AWS continues to show strong momentum with Net scores in the 60%+ range over the last nine ETR surveys, but Microsoft Azure has notably maintained even higher scores in every survey since July 2018. Google’s spending momentum was slower than its rivals until much more recently, but the latest surveys by ETR show that it appears to be gaining parity with AWS.

But the story is different when it comes to spending by Fortune 500 companies in particular. Among the biggest spenders, AWS actually has a stronger Net score than its rivals, consistently topping 70% in every survey since October 2018. Azure’s spending velocity is still strong, and Google’s recent uptick is all the more impressive with these larger accounts. 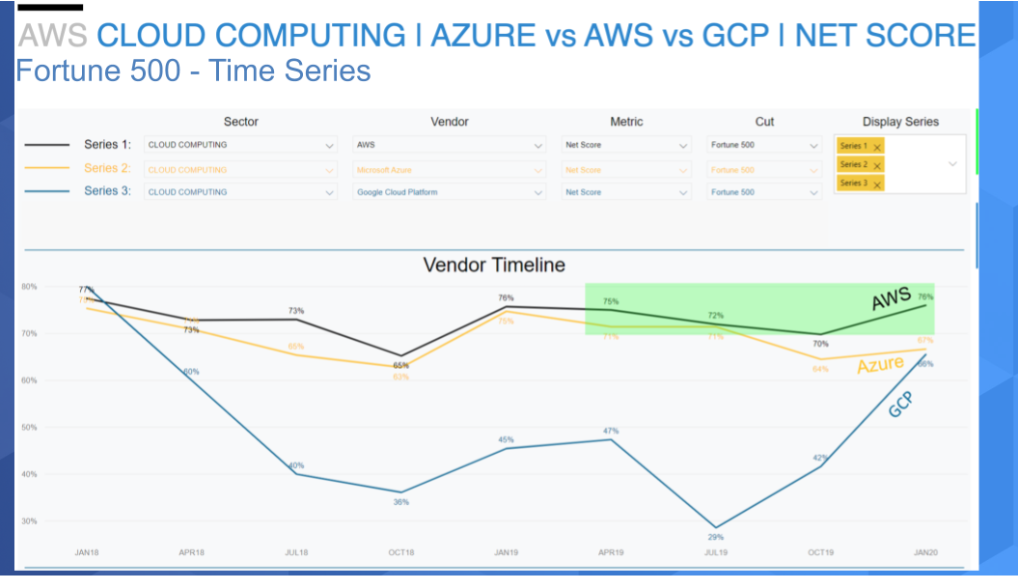 “It appears that the big brands which perhaps used to shy away from cloud are increasingly adopting,” Vellante said.

And there are compelling reasons to buy from each of the big three cloud vendors, the ETR survey data shows. In the case of Microsoft Azure, most CIOs point to its compatibility with their organizations’ existing skills and IT footprint.

This is a huge advantage for Microsoft, Vellante said: “It’s just simpler to migrate work to Azure if you’re already running Microsoft apps. If Microsoft continues to deliver adequate features Azure becomes a no-brainer for many customers.”

As for AWS, its major advantage is the increased return on investment it offers.

Google Cloud is attractive simply because of the tech it offers, especially when it comes to its analytics and artificial intelligence offerings.

More than anything else, though, ETR’s data underscores the enormous opportunity that exists in the cloud for all three players, and why there will be no “winner takes all” scenario. 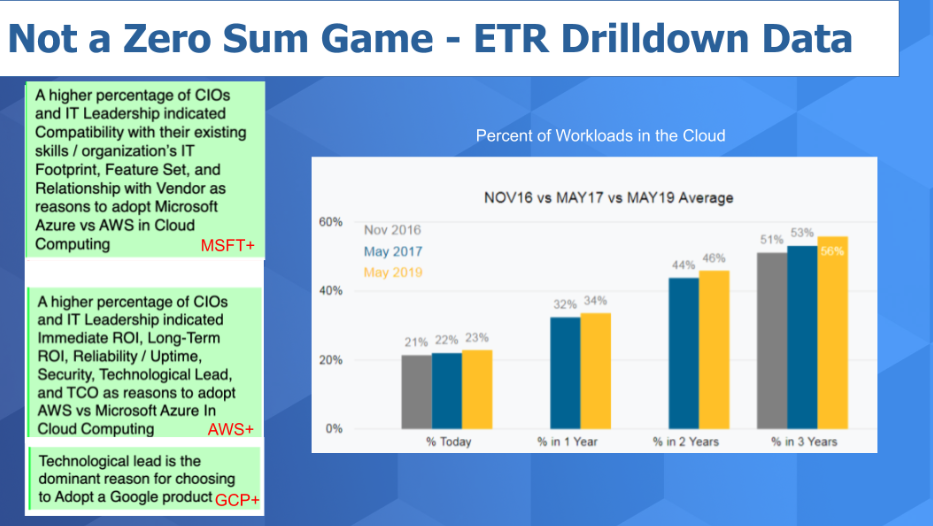 The above chart shows the percent of workloads in the cloud today, in two years and in three years, across different survey dates. Right now it’s between 25% and 35% and in a few years will likely grow beyond 50%.

“This is a huge growth opportunity for these companies,” Vellante said. “Sometimes people say to me that Google doesn’t care about the cloud because it’s such a small piece of their business or they can’t be No. 1 or No. 2, so they’ll exit. I don’t buy it for a second. This is a trillion-dollar market. Google is in it for the long game in my opinion.”