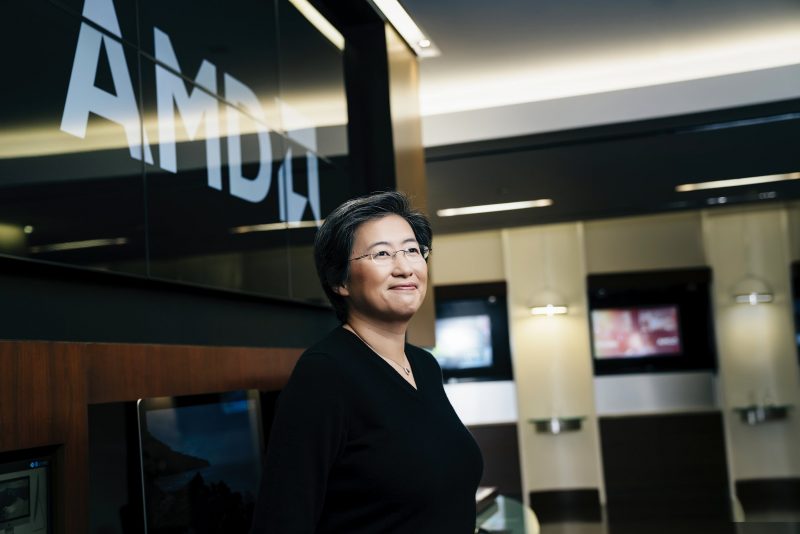 The investor sell-off came despite what was a solid first-quarter performance that matched Wall Street’s expectations.

The company reported a first-quarter profit before certain costs such as stock compensation of 18 cents per share on revenue of $1.79 billion. The profit meet Wall Street’s forecast, on slightly lower revenue of $1.78 billion.

AMD’s computing and graphics business was the best performer, pulling in revenue of $1.44 billion for the quarter, up 73% from a year ago thanks to strong Ryzen processor and Radeon product channel sales, the company said.

AMD Chief Executive Officer Lisa Su (pictured) told investors in a call that she believed the company had navigated what was a challenging first-quarter environment extremely well, and said she was optimistic for its fortunes going forward.

“While we expect some uncertainty in the near-term demand environment, our financial foundation is solid and our strong product portfolio positions us well across a diverse set of resilient end markets,” Su said. “We remain focused on strong business execution while ensuring the safety of our employees and supporting our customers, partners and communities. Our strategy and long-term growth plans are unchanged.”

Analyst Patrick Moorhead of Moor Insights & Strategy said the company had a “monster quarter” in terms of revenue, breaking several records in the process. For example, it set all-time records in terms of notebook and client processor revenue.

“I believe these records were driven by the company’s increased competitiveness in notebooks, particularly with its Ryzen Mobile 4000 platform,” Moorhead said.

“I attribute most of this growth to cloud service and software-as-a-service players embracing the platform more and more,” Moorhead said. “The company believes it did take unit market share and I will be interested in seeing if it comes through.”

AMD’s Epyc server chips have been warmly embraced by a number of leading cloud services providers. In the quarter just gone, IBM Corp. announced it was making the beefy chips available on its bare-metal cloud servers. And the Epyc chips could gain even more market share, as AMD debuted three new versions of it just a couple of weeks ago that it said boast the world’s highest per-core performance.

Any boost will surely be welcome for the company, which like most technology firms has been unable to escape the impact of the coronavirus outbreak. Although AMD managed to meet expectations in the first quarter, it’s unlikely to do so in the next one. For the second quarter, it’s forecasting revenue of $1.85 billion, give or take $100 million. Wall Street had the company down for revenue of $1.92 billion.

As for the full year, AMD said it’s lowering its expectations because of COVID-19 and is now anticipating revenue growth of 25%, down from its original forecast of 30% growth.

“The biggest variable is the PC business in its entirety,” Su said in a conference call. “When you look at the other markets — game consoles, data center — we’re about where we expected, and the signals continue to be positive in those areas.”