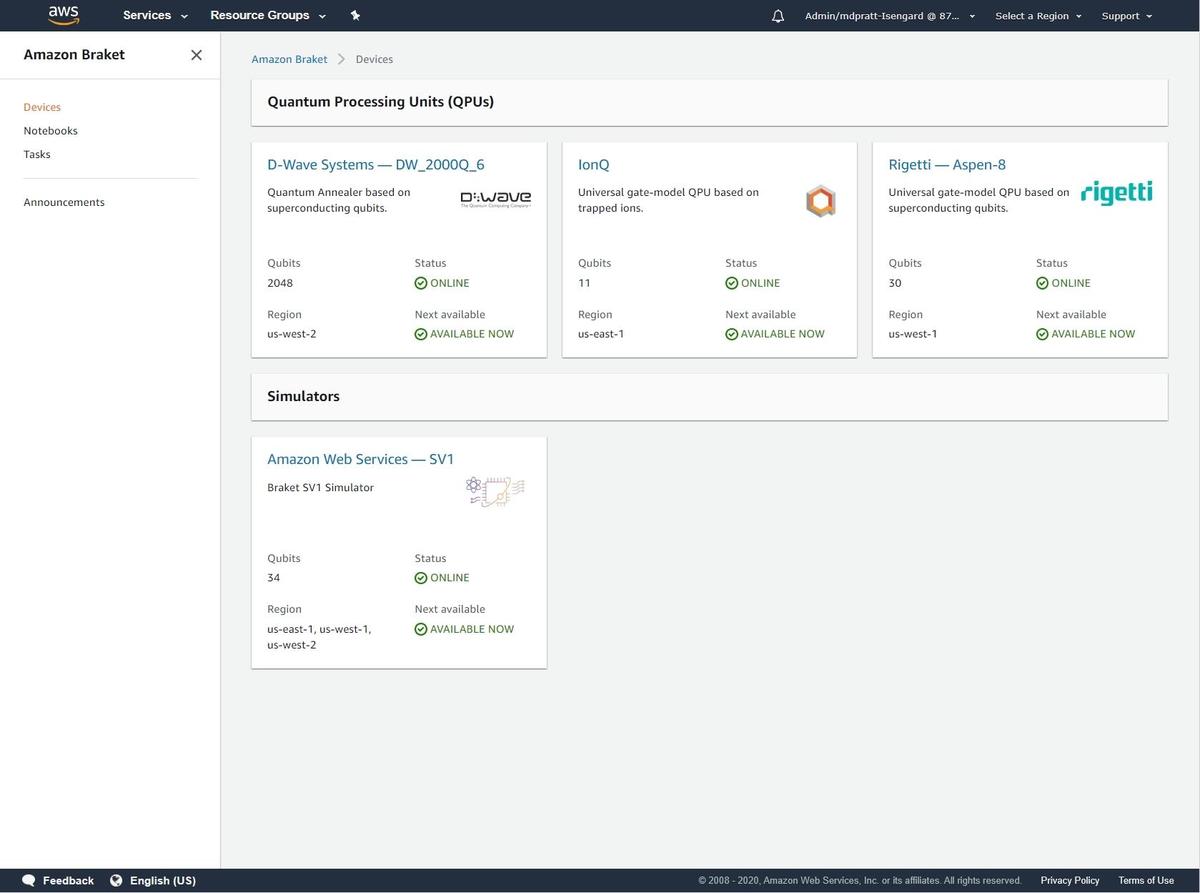 Announced in preview at the AWS Re:Invent conference in December, Amazon Braket is a fully managed service that lets developers, researchers and scientists play around with quantum machines from three different hardware providers.

Quantum computers are a rapidly advancing technology that have the potential to solve extremely complex problems that would bamboozle even the most powerful of today’s classical computers, since they’re based on a fundamentally different architecture.

The difference between quantum and classical computers is that quantum processing takes place in multiple states simultaneously. While traditional machines use binary digits, or “bits” that are represented as a 1 or a 0, quantum computers use “qubits” that can be “superpositioned,” which enables them to be represented as 1s, 0s or both states at the same time.

Qubits also use a method called superdense coding that allows them to hold two bits simultaneously. So two superpositioned bits held in one qubit means they can process four times the data of ordinary computers. Qubits also have the ability to correlate with each other so that each is aware of the state of all the others, meaning they can grow in power exponentially as more are added.

Amazon Braket is essentially a cloud-based test environment researchers can use to create quantum algorithms and try them on quantum machines built on different hardware architectures from partners including D-Wave Systems Inc., IonQ Inc. and Rigetti Computing inc.

That’s important because the quantum computing race has only just begun, and it’s not clear yet which architecture is best or which company will come out on top. It may well be that different quantum architectures turn out to suit different kinds of problems, in which case there will be room for all three companies to make an impact.

D-Wave Systems is widely known for being the first company to build a working quantum computer based on a quantum annealing superconductor architecture. It has already sold machines to customers including Google LLC, and has its own cloud service from which researchers can test its platforms.

Rigetti’s quantum computers are built on a gate-based superconducting architecture. It’s slightly different, but in both cases the quantum circuits are made out of superconducting materials that have to be kept at temperatures near absolute zero in order to work.

IonQ is perhaps the most interesting partner of the three because it uses trapped ions, or charged particles suspended in a vacuum, to create qubits, avoiding the need for its hardware to be kept at extremely low temperatures.

Amazon said customers using the service can design their quantum algorithms using the Braket developer toolkit, or choose from a library of pre-built algorithms. They can also run hybrid algorithms that combine quantum systems with classical computing systems to overcome the limitations of today’s nascent quantum technology.

Amazon said Braket is available today in US East (N. Virginia), US West (N. California), and US West (Oregon) AWS regions, with more regions planned for the future.

Google and IBM Corp. have also built their own quantum machines based on proprietary hardware and make this available to researchers via their own cloud services.

Constellation Research Inc. analyst Holger Mueller told SiliconANGLE that Amazon has done a good job in making Amazon Braket generally available so soon, since the company came to the quantum computing game later than its rivals.

“But it has now jumped into the lead with its AWS Braket offering,” Mueller said. “The winner in this race will be determined by how easy it is for developers to combine existing cloud assets with quantum technology, as this is what will increase developer velocity and contribute to enterprise acceleration.”