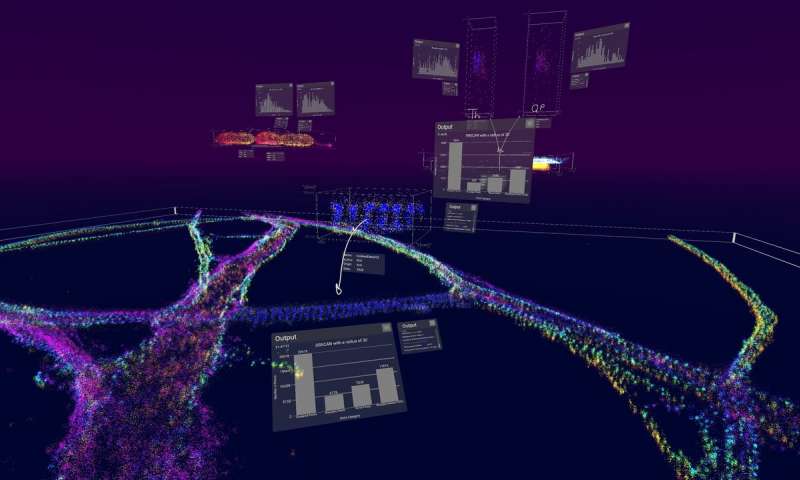 A collaborative project between 3D image analysis software company Lume VR Ltd. and scientists at the University of Cambridge showed off a new virtual reality tool today that gives scientists a new view of the inner workings of human cells.

The researchers hope the Google Street View-style tool will provide an up close and personal way to understand fundamental problems in biology to help new treatments for disease. The details are published in the scientific journal “Nature Methods.”

By using VR, scientists can “walk” through the “byways” and “highways” within the cells themselves and see proteins fold and unfold. They also can potentially see where things go wrong when they go wrong and even rewind biological processes by looking through recorded and visualized datasets.

The software, vLUME, uses super-high-resolution microscopy data that is collected, collated and digested. After that, the data needs to be rendered in a manner understandable by humans, and that’s where the immersive nature of virtual reality comes in.

By donning a VR headset, researchers can then dive into the internal structures of a human cell and look at the structure of a cell wall, a Golgi apparatus (the part of a cell involved in intracellular transport), the warps and waves of a mitochondria (the provisioner of energy) or the folds of an individual protein that could be malformed. They can even pull back to view the roadmap of an entire cell.

“Biology occurs in 3D, but up until now it has been difficult to interact with the data on a 2D computer screen in an intuitive and immersive way,” said Dr. Steven F. Lee from Cambridge’s Department of Chemistry, who led the research. “It wasn’t until we started seeing our data in virtual reality that everything clicked into place.”

The team from Lume specialized originally in spatial computing and data analysis and used big data computing to develop the tool.

“VLUME is revolutionary imaging software that brings humans into the nanoscale,” said Alexandre Kitching, chief executive of Lume. “It allows scientists to visualize, question and interact with 3D biological data, in real time, all within a virtual reality environment, to find answers to biological questions faster. It’s a new tool for new discoveries.”

Kitching argues that it’s important to take data out of spreadsheets and off pages of books and out of screens, where it’s static. Humans don’t think of data as something as numbers or charts, so it needs to be in motion for better comprehension.

Using the software — which can take together datasets of millions of data points and find patterns using complex clustering algorithms – the virtual reality software can generate what looks like vast landscapes of protein-scaffolded cell worlds for researchers to explore as they do their work. This is a whole new space for them to learn to cure diseases, collaborate and understand their discipline.

The team is currently using vLUME with biological datasets, such as neurons, immune cells and cancer cells. For example, Lee’s group has been studying how antigen cells trigger an immune response in the body.

“Through segmenting and viewing the data in vLUME, we’ve quickly been able to rule out certain hypotheses and propose new ones,” said Lee. This software allows researchers to explore, analyze, segment and share their data in new ways. All you need is a VR headset.”