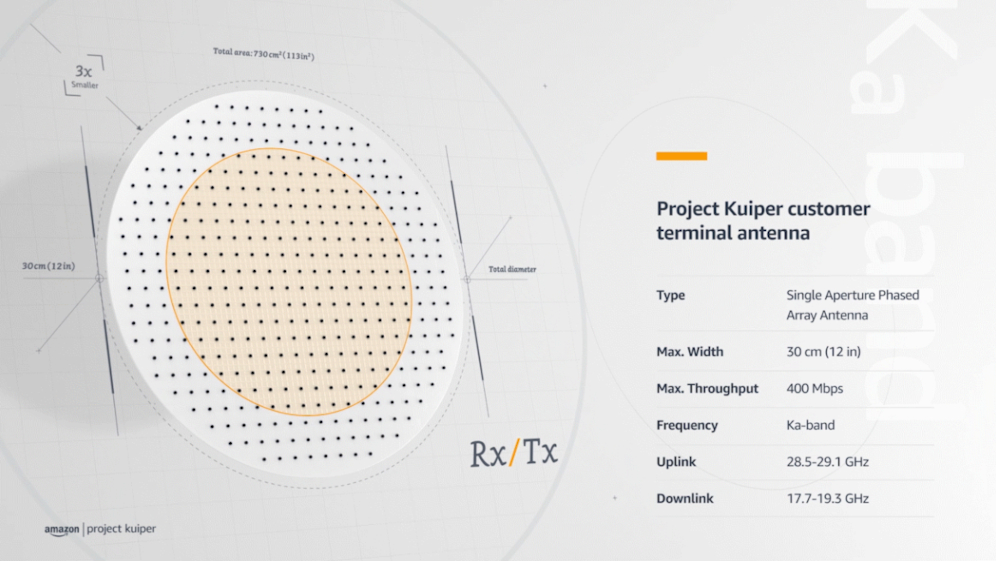 Amazon.com Inc.’s Project Kuiper unit, which is building a network of internet satellites, today detailed a compact antenna design it developed to let users connect to the constellation from the ground.

Project Kuiper is backed by more than $10 billion that Amazon earmarked earlier this year to support the effort. Unlike traditional communications satellites, which are usually perched more than 20,000 miles above the surface, the online retail giant’s planned internet constellation is set to operate in so-called low Earth orbit at altitudes of just a few hundred miles. The shorter distances should translate into lower latency for users.

But though the satellites are much closer to the Earth’s surface, consumers will still need specialized devices known as terminals to receive internet access. Those terminals, in turn, use antennas to send and pick up signal from low-Earth orbit. That’s where the new antenna debuted by Amazon today comes into the picture.

Amazon’s satellites will send data in the so-called Ka-band frequency range, which is widely used for satellite communications because it can provide large amounts of bandwidth. The downside is that terminals using the Ka-band range typically need two separate antenna dishes: one for receiving signals and one for sending them. That increases the size of the terminal and makes it more expensive to produce, which in turn increases costs for consumers looking to access satellite internet.

The antenna developed by Amazon uses a new phased array design that replaces the two separate antenna dishes with just one. The company’s Project Kuiper group has found a way of overlaying the antenna components responsible for sending signals and the ones responsible for receiving them over one another in a single module measuring 12 inches wide. The result, Amazon says, is a threefold reduction in surface area and a significant reduction in manufacturing costs.

The antenna design fared well in internal connectivity tests. According to Amazon, its experiments have shown that the device can support connection speeds of up to 400 megabits per second, and performance is only expected to improve in future iterations.

“If you want to make a difference for unserved and underserved communities, you need to deliver service at a price that makes sense for customers,” said Rajeev Badyal, the vice president of technology for Project Kuiper. “This simple fact inspired one of our key tenets for Kuiper: to invent a light, compact phased array antenna that would allow us to produce an affordable customer terminal.”

Amazon has received approval from the U.S. Federal Communications Commission to launch more than 3,200 internet satellites into orbit by 2026.