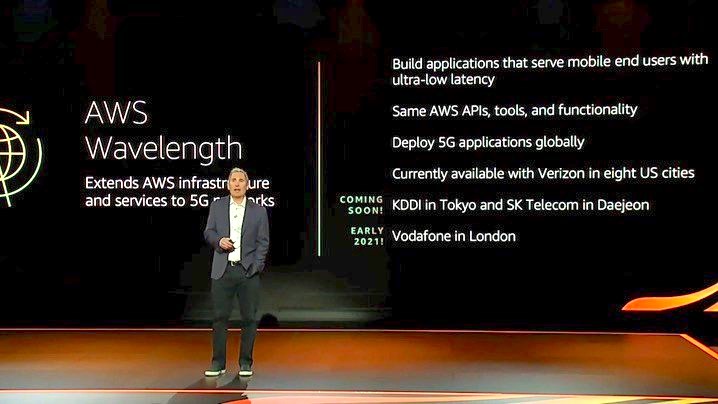 Wavelength, first rolled out in August, is designed to give latency-sensitive applications a speed boost by placing them physically closer to the data they process. The service allows developers to deploy their applications to AWS Wavelength Zones.

Those are infrastructure deployments that embed AWS compute and storage services within the telecommunication providers’ data centers at the edge of the 5G network, so that application traffic only needs to travel from the device to a cell tower to an AWS Wavelength Zone running in a metro aggregation site.

The service removes the latency that results from accessing the cloud using traditional mobile architectures that require multiple hops between regional aggregation sites and across the internet and enables customers to take full advantage of 5G networks. Put more simply, by moving the workload closer to the user, access speeds up.

Wavelength is also designed to be easy to deploy. Developers that want to deploy their application to the 5G edge can simply extend their Amazon Virtual Private Cloud to include the desired AWS Wavelength Zones, allowing them to start running a broad range of AWS services

“With AWS Wavelength and SKT, developers can build the ultralow-latency applications needed for use cases like smart factories, autonomous vehicles, connected hospitals and augmented and virtual reality-enhanced experiences,” Dave Brown, vice president of Amazon EC2, said in a statement.

“We’re trying to enable our customers to reach their end users with low latency and great performance, wherever those end users are and whatever network they’re using to get connected, whether that’s the 5G mobile network, whether it’s the internet or an IoT network,” Elissaios said.