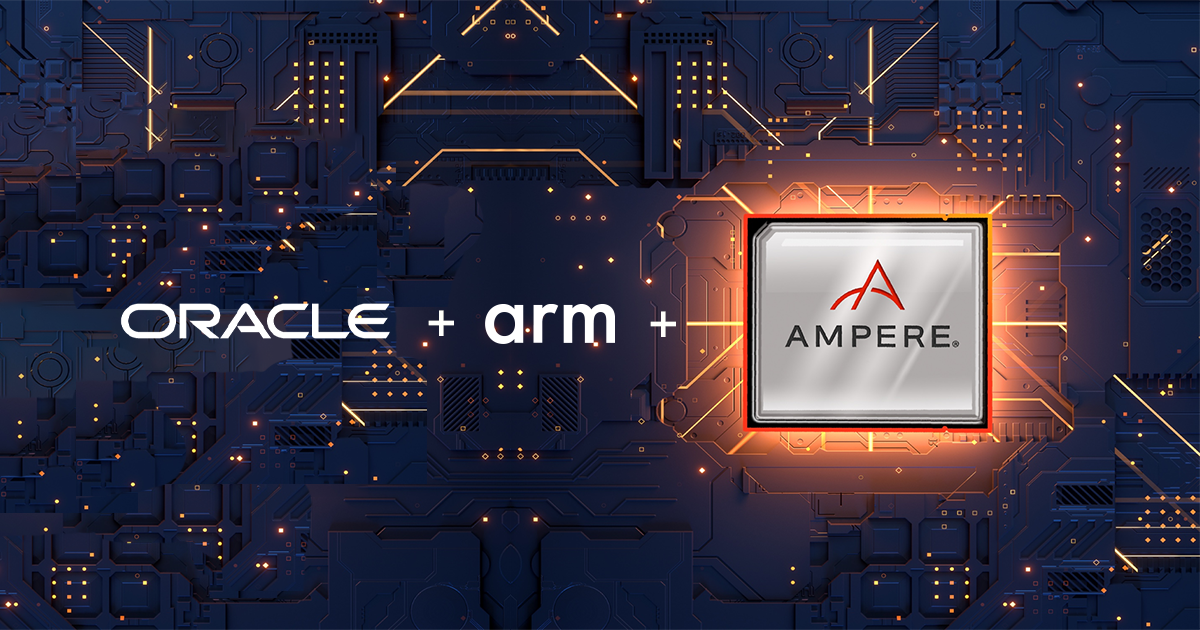 Oracle Corp. is giving customers more choice and flexibility with the launch of its first Arm-based cloud compute offering on the Oracle Cloud Infrastructure platform.

The new offering, called OCI Ampere A1 Compute, is designed to power both general-purpose and cloud-native workloads that demand high performance at more manageable costs, Oracle said today. It’s based on the Ampere Altra architecture built by Ampere Computing LLC.

Today’s announcement comes as Oracle makes a big investment into the Arm ecosystem more generally, with the availability of more resources and tools, including a new development environment for developers that’s intended to support Arm-based application development.

Arm Ltd.’s central processing units are known for their extremely efficient, flexible and scalable architecture. They’re most prominently used in smaller devices such as smartphones, but in more recent years they have come to power everything from personal computers and “internet of things” devices to computer servers and even supercomputers.

Oracle said its new Arm compute instances come in a range of options and sizes to fit just about any workload, with choices including what it says are the industry’s first Arm-based flexible virtual machine shapes that can be right-sized for different jobs. There are also more powerful bare metal server options.

For enterprises they provide a great alternative to x86-based instances, and they’re suited to a vast range of workloads, Oracle said. For example, the OCI Ampere A1 Compute instances are an option for running web servers, application servers and container workloads because their available shapes mean customers can strike a balance between the performance they need and the costs they can bear. They’re also great for in-memory caches and databases, mobile application development and more compute-intensive tasks such as artificial intelligence training and inferencing and media transcoding, Oracle claimed.

In an interview with SiliconANGLE, Matt Leonard, vice president of product for compute at Oracle Cloud Infrastructure said that in the past, enterprises used a host of different CPU architectures to run different sorts of workloads. Sparc, MIPS, PowerPC, Itanium and x86-based architectures were all commonplace in the 1990s, he said. More recently, the industry consolidated towards Intel’s x86-based processors because the single architecture made it easier for companies to build a single set of tools that could run anywhere. Now, Leonard said, we’re seeing a reversal of that trend as customers demand more options for different workloads.

“Arm is becoming really important to the industry as a whole,” he said. “What we’re seeing now is an expansion of options again. The low cost and low power of Arm opens up opportunities for customers, because certain workloads have different needs.”

International Data Corp. analyst Ashish Nadkarni said that heterogeneous computing is emerging as a new front for cloud service providers as they scramble to provide the additional options customers demand.

“As customers shift to cloud native approaches for their performance intensive computing applications, they will no doubt increase their investment in Arm-based instances from such providers,” Nadkarni said. “Oracle’s announcement on Arm-powered instances for OCI and Cloud@Customer is a timely move to tap into companies in the midst of this shift.”

The OCI Ampere A1 Compute instances give Oracle an edge over rival cloud providers such as Google LLC and Microsoft Corp., which currently do not offer Arm-based compute options, though Microsoft at least is said to be working on rectifying that.

The announcement means Oracle gets close to some sort of parity with Amazon Web Services Inc. too., which debuted its own Arm-based Graviton processors back in 2018. However, it’s notable that AWS designed and built the Graviton CPUs entirely by itself, whereas Oracle is using Ampere’s architecture.

“We are in the multiprocessor vendor era with a number of different processor platforms all competing for enterprise workloads,” said Constellation Research Inc. analyst Holger Mueller. “Cloud infrastructure providers need to provide these processor platforms to attract the related workloads. Arm is an important platform for energy-efficient, cost-efficient and edge-capable applications, and OCI Ampere A1 Compute instances give customers access to a much broader choice of processing options.”

Not surprisingly, Oracle said that its new option is one of the best available, and it makes some big claims around performance and pricing. It said OCI Ampere A1 Compute is the first Arm-based core server available in the cloud priced at 1 cent per core per hour and $0.0015 per gigabyte of random-access memory per hour. The service also provides linear scaling to ensure that performance per core doesn’t drop off as customers increase their core count, ensuring predictable performance, Oracle said.

The company said its OCI Ampere A1 Compute virtual machines are available in a choice ranging up to 80 central processing units, with between 1 and 64 gigabytes of memory per core, while its bare-metal instances designed for more intensive workloads are available with up to 160 cores.

IDC analyst Kuba Stolarski said he was impressed by Oracle’s numbers, and that OCI Ampere A1 Compute looks to be a compelling option.

“With low entry cost, variable deployment size and the ability to deploy in the public cloud or on premises with Cloud@Customer, the A1 Compute instance offers the best mix of long-term scalability and near-term accessibility,” he said.

Oracle could possibly add more Arm CPU options to its cloud in the future too, Leonard told SiliconANGLE. He said the company is offering Ampere-based Arm chips first thanks to its longstanding relationship with that company, and that it’s currently “exploring other Arm options,” though he provided no specifics.

In any case, it’s clear that the company wants to help expand and play a key part in the wider Arm ecosystem going forward. Oracle said its wider investments announced today are about encouraging developers to to build more applications based on the Arm architecture, which they can then run on Oracle’s cloud.

To that end, Oracle is announcing new Arm-based compute resources with the Oracle Cloud Free Tier that gives developers free credits of up to $300 for 30 days to take its platform for a spin. There’s an Always Free Arm offering too that provides developers with four A1 cores and 24 GB of memory, the company said. And Oracle’s Arm Accelerator program offers up to 12 months of credits for Oracle Cloud for developers, universities and other customers that need resources beyond what the Cloud Free Tier provides.

More interesting, perhaps, is Oracle’s new development stack, a suite of developer tools available on the Arm-based A1 instances. It includes Oracle Linux, Java, MySQL, GraalVM and the Oracle Container Engine for Kubernetes service. To get started, Oracle has also created an Oracle Linux Cloud Developer image that installs, configures and launches a development environment that can be deployed on OCI.

As part of its commitment to developers, Oracle said it’s working with a bunch of open-source partners such as GitLab Inc., Jenkins, Rancher Labs Inc. and Datadog Inc. It has also joined the Continuous Delivery Foundation, an open-source community that houses important open-source continuous integration/continuous delivery software projects.