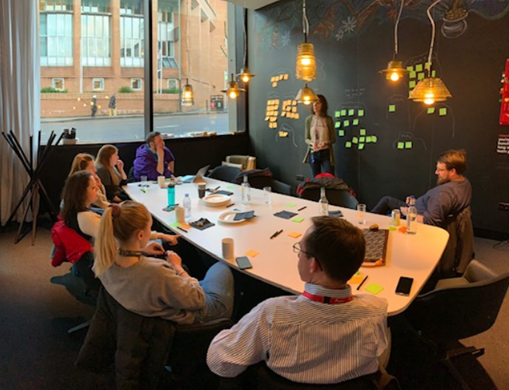 JPMorgan Chase & Co. has found a way to boost employee morale, stem attrition and build its employees’ technology skills. And it’s doing it for the price of pizza and doughnuts.

For the past five years, the financial services giant has been nurturing a grassroots program called Ignite based on communities of practice, an informal learning model that brings people together around shared interests.

From humble beginnings in the company’s Glasgow, Scotland office in 2016, the program has grown to encompass 170 communities in 23 sites around the globe, spanning topics ranging from machine learning to public speaking. About 14,000 people have participated, according to Phil Reid, a product manager who launched the program along with colleague Per Hammer.

There are a few rules and little structure, although the company provides coaching and pays for the doughnuts. A community must relate at least tangentially to JPMorgan’s business, but beyond that the format, schedule and agenda are determined by the members.

Although skills development is a goal, the organizers were also interested in building the esprit de corps that can be elusive in a global business of 190,000 people. “One problem we set out to solve was to build back some of the social networking that can get lost in a huge company,” Reid said.

Ignite was a classic skunkworks project. Reid learned about communities of practice while attending a local conference joined an existing community to help him acclimate to a new job as a technology analyst. The experience sparked an idea to bring more communities to JPMorgan’s Glasgow office and 20 quickly sprang up. When JPMorgan’s global technology committee came by for a visit, community leaders set up kiosks to showcase what they were doing.

The technology leaders “were blown away by the excitement they saw from all the members in Glasgow,” Hammer said. “That prompted it to go global.”

Technology is a popular community theme. There are groups for DevOps, augmented reality, Java, machine learning, the “internet of things” and coding for noncoders. The Python community in Bangalore, India, is one of the largest at 500 members.

What is perhaps surprising in a company whose business is managing money is that nobody gets paid. “All we pay for is pizza, coffee and donuts,” Hammer said. “Altruism is a big driver. So is the idea of learning together.”

There are indirect benefits, of course. Community leaders use the experience to hone their teaching skills and gain visibility with management. Some employees have leveraged Ignite to help switch careers, such as the bank teller in Columbus, Ohio who retrained herself as a software engineer with the help of a Java community. “We’ve heard a lot of cool stories about people moving into new roles,” Reid said.

“Our senior leadership is starting to see this as a differentiator for recruitment,” Reid said. And although the company hasn’t quantified the impact on turnover, numerous studies have shown that training and community-building programs reduce attrition and improve employee satisfaction.

Stripe reveals how its breaking down the barriers of doing business online
AWS, Micro Focus partnership focused on customer-centric innovation
Bet on security Day 1 to prevent app rework, speed time to market
How Formula 1 and the NHL are telling new sports stories with data
Opening keynote at re:Invent 2021 demonstrates why AWS continues to lead the cloud race