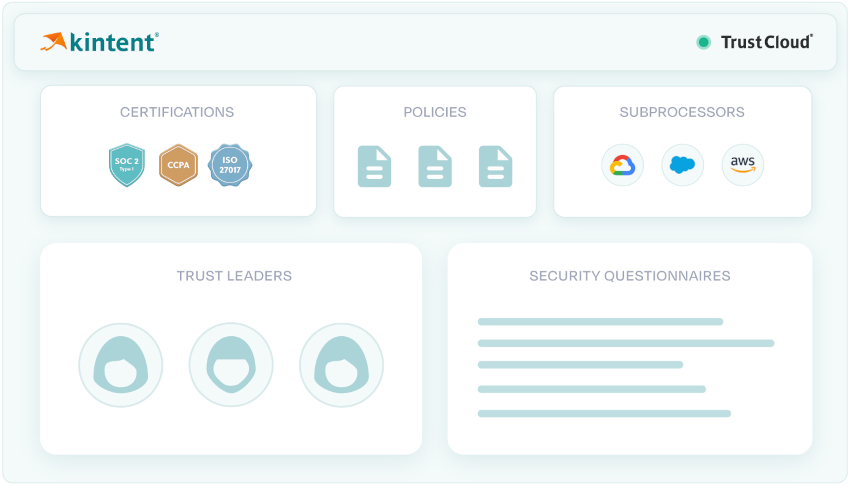 Startup Kintent Inc., which helps companies more easily comply with cybersecurity regulations, today announced that it has raised a $18 million funding round led by OpenView.

The round also included the participation of Tola Capital, which led Kintent’s previous $4 million raise in 2021. Kintent will use the funding to double its 25-person team by hiring more sales and support staff.

Enterprises often require that the software-as-a-service applications they use comply with cybersecurity standards such as SOC 2. Such standards specify a set of steps that a SaaS company must take to protect its systems from cyberattacks. In some cases, an enterprise may also require that its SaaS suppliers comply with industry-specific regulations such as the healthcare sector’s HIPAA law.

Achieving compliance with a cybersecurity standard can involve a significant amount of work. SaaS providers have to roll out the necessary cybersecurity controls across their systems, test whether the controls are implemented correctly and undergo an audit. From there, a company has to regularly check for potential compliance issues that may emerge over time and fix them.

Kintent has developed a platform that eases the task of complying with cybersecurity standards. Additionally, the startup promises to help SaaS companies streamline their sales processes.

“We must transform the status quo from check-the-box compliance to trust,” stated Kintent founder and Chief Executive Officer Sravish Sridhar. “To do that, we need a future where vendors and customers use APIs to truthfully share security and compliance information with each other. So, instead of zero-trust, Kintent will create a world of transparent, measurable trust – where trust in business is programmatically verified at all times.”

Kintent’s platform includes a module called TrustOps that automates a number of time-consuming compliance tasks. It can connect to a company’s internal systems and automatically implement the cybersecurity controls necessary to comply with standards such as SOC 2. Moreover, TrustOps can run automated tests to check if a system adheres to compliance requirements.

Because enterprises often require that software products they buy adhere to standards such as SOC 2, compliance is an important element of SaaS companies’ sales strategy. A SaaS provider must demonstrate to potential customers that it complies with relevant cybersecurity standards. The more efficiently this task is performed, the more efficient a SaaS provider’s sales process becomes.

Alongside the TrustOps module, Kintent’s platform includes a second module called TrustShare that helps tech firms share compliance data with customers. Using TrustShare, a SaaS provider can automatically generate a website with detailed data about its compliance efforts. This website can be shared with potential customers to help them more conveniently carry out product evaluations.

Often, enterprises ask SaaS suppliers to answer questionnaires about how they implement cybersecurity controls in their infrastructure. Kintent’s platform includes a tool called Response that uses artificial intelligence to automatically suggest answers for compliance questionnaires. The AI generates suggestions based on past answers and the compliance data that a SaaS provider keeps in Kintent’s platform.

Since launching in 2020, Kintent has built up a customer base that includes more than 60 companies. Kintent’s customers include $6.3 billion artificial intelligence provider DataRobot Inc. and Snyk Inc., a code security startup reportedly preparing to go public at a valuation exceeding $8.6 billion.