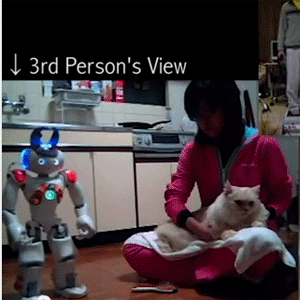 Kinect and Wii Used to Waldo a Nao Robot to Brush a Cat, Imagine What’s Next

In what some might call an unholy tandem, a Microsoft Kinect and Nintendo Wii have been hybridized together to permit a man—in this case software engineer  Taylor Veltrop—to remotely brush his cat via 23-inch-tall robotic surrogate.

To make this happen, Veltrop hacked together a Kinect, two Wiimotes, a head-mounted display (HMD) visor, a treadmill, and a Nao robot. Tiny cameras on the NAO robot actively broadcast what the robot is seeing back to the HMD and Veltrop hacked the Kinect and Wiimotes to allow him fine control over the motions of the robot arms—combined with the treadmill he could walk up to the cat, grasp the brush, and gently brush the cat.

His project wasn’t without its trial an error, he adds, “This was the second try accomplishing brushing the cat. On the first try we discovered that the positioning of the brush in NAO’s hand needed to be flipped 180 degrees from the intuitive direction.”

It’s been long an argument of mine that augmented reality can cut both ways—while for the everyday person, aug-reality is all about offloading processing power from the brain into the cloud via mobile devices and adding context to reality, but there’s also the surrogacy angle.

The NAO robot has an excellent interface and has been eyed by many Kinect engineers and developers for attachment. In fact, Taylor Veltrop himself began is one-year-journey by announcing his project using the Aldebaran NAO Robot and the Kinect for this very demonstration in 2010.  Shortly thereafter another engineer submitted a video showing off the robot picking up a ball; but at that time Veltrop had already gotten the NAO to chop food in the kitchen with enhanced hand-coordination [VIDEO].

With this sort of technology, remote application of human dexterity could be possible for manipulation of objects in hostile environments. For example, Fukushima and other nuclear sites could benefit from having remote manipulators, search-and-rescue could deploy robots with telepresence with humans; it’s a surprise that NASA isn’t well publicized for developing this sort of technology for space EVA. I know quite a few vulcanologists who would love to have devices like this for fine manipulation of molten lava while studying volcanos.

You can learn more about Taylor Veltrop and his dreams of electric sheep from his blog. For the rest of us attention-span addled technologists, there’s the video of him controlling a robot to pet a cat named Lotus.