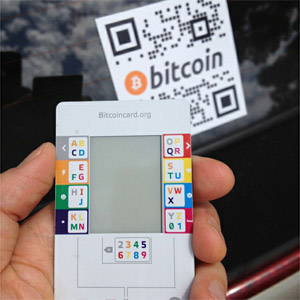 Earlier this month SiliconANGLE got wind of a new piece of technology being developed to revolutionize mobile cash transactions by giving people the ability to store and transfer bitcoins via a device as small and thin as a credit card. Not just the usual smartcard, but a pretty impressive piece of technology that combines networking, power generation, and super-thin computing called “The Bitcoin Card” powered by Mycelium.

Part of the team from Bitinstant caught up with “the Bitcoin Card” developers in Vienna to speak with them about the nature and expectations of the technology:

This card is what’s known as a “smart card,” and has the explicit purpose of acting as a secure, convenient Bitcoin wallet and payment system. Alex Squared, through their company, Megion Technologies GmBH, have been developing the technology behind this card over the past five years – even before Bitcoin was in existence. Originally, the card was intended to be used for various community currencies around the world, but when Bitcoin came out, they were smart enough to pivot the device to be Bitcoin-exclusive, custom-tailoring it for the new revolutionary global currency.

The takeaway of this device is very similar to the previous piece we ran (based on a slick marketing video of the underlying technology) but the same highlights still stand out of what we can expect it to do for us. Currently, the Bitcoin Card is expected to act as a secure storage for Bitcoins and provide the platform for financial transactions without opening the user up to vulnerability. It’s also designed thin and small (about the size of a credit card) so that it can be easily transported in a wallet.

Interesting elements of the card include the fact that it has no interface other than wireless—no USB or even power. For power, the card will use a solar cells (covering the back of the prototype) and can even run when drawing power from those cells. The developers believe that casual consumers won’t need to worry about leaving it out in the sun as it should be able to keep itself charged through general use. They’re also planning to add the ability to generate electricity from the flexing the card might receive from being in a wallet or from button presses themselves—this can be done by harnessing the piezoelectric effect.

Another part of what makes these cards so remarkable is that they’ll build an ad hoc mesh network with other cards and merchant dongles (a USB device merchants will use for point-of-sale transactions.) Since Bitcoin itself uses a peer-to-peer network to confirm and verify transactions and the Bitcoin Card will create its own peer-to-peer mesh network (between other cards and dongles) will be able to enable access to that peer-to-peer confirmation network when transactions happen.  Transactions with merchants will always work (I expect at least, if they can access the Internet from a point-of-sale); but between people will require enough people also with cards around to form a suitable network.

According to the Bitinstant team the device is expected to go into production around January 2013 and that a single card will cost the consumer within a range of $10-$25.

Looking at the current mobile market, this sounds like its more than cheap enough to make these devices easily accessible by those who might want to use them.

For more information about the Bitcoin Card and Bitinstant’s excellent technical examination be sure to read further at their blog.