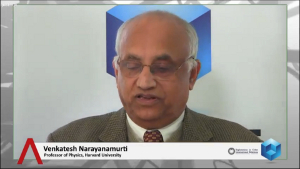 Venkatesh Narayanamurti, Professor of Physics at Harvard University, discussed the need of tech professionals to understand the world they live in and the connection between discovery and innovation.  Meeting with theCUBE co-hosts Dave Vellante and Jeff Kelly, Narayanamurti spoke live from the MIT ECIR workshop today.

In this day and age, where technology is present 80 percent of the time, “we need to have all Harvard students appreciate science. We want to create engineers who not only know how technology works, but also how the world works,” Narayanamurti said. “Computer science of Harvard would be different, it should relate to society right from the start,” he added.

All disciplines have creativity

All disciplines have creativity according to Narayanamurti. “Invention is also a creative process but which has value in terms of patents? Innovation is when it becomes applicable to the world. We want a culture that embraces all three,” he says Scientific discovery is linked to invention, “you need to have an interplay between discovery and invention,” said Narayanamurti. “We want to encourage the inventors.”

Commenting on the current geopolitical concerns over IT governance, Narayanamurti said “the Internet started in the United States,” the only country that doesn’t have its name at the end of a web address. “There has to be a body that assigns the names and the numbers. ICANN became the body to do that.” Other countries such as Russia, India, or China, have some serious reservations, “because we control so much of it. We are in control, but people do not trust us anymore.”

The Googles of the world do not want to give up that control and the US-centric view, Kelly pointed out. “How do we move to a more multilateral governance framework?”

How to build trust in multi-nation governance?

Narayanamurti said it comes down to rebuilding trust and a sort of “diplomatic missions” in China, Russia, Brazil, and other countries might be the answer. “Ultimately it has to become multi-stakeholder,” as a lot of the customers will come from these regions. “We will reach some kind of equilibrium, but there will be a lot of missteps along the way,” he predicted.

A more open source-focused approach may prove to be an an effective governance mechanism, according to Narayanamurti. “Because it is so distributed, its strength can only come by having it even more distributed. That would also boost security,” he said.

Commenting on security and its importance, Narayanamurti noted that “you have to build it intelligently.” That is where the “need for engineers to understand how the world works” arises.

Asked if politicians thoroughly understand technology, Narayanamurti said “it’s really, really sad that we don’t have people with enough technology knowledge.” He used the healthcare sector as an example. “We have no clue how to run it. This is a huge issue.”

Asked to comment on recent talks of Germany having its own Internet, Narayanamurti said that if there would be a German, a Chinese, a Russian internet, “there will be a question of how you interface them” and there would still be a need for protocols. German companies are global companies, so are the Chinese ones, “they have to be able to work with each other. The main internet should really be an open internet, but just not necessarily controlled by the US.”

Asked if there was a need to rethink the way we approached security, Narayanamurti said there was. Commenting on airport security, he pointed out that “we are not scanning people intelligently. This applies everywhere. Ultimately, what we all value is our freedoms. The battle between security and freedom has gone too far.”

“People have maybe gone too much to the venture model,” Narayanamurti stated. “One of the biggest problems of our times is energy. We need to create new kinds of xerox and industrial labs that can address the big physical issues. The venture model companies realize they also need the physical infrastructure.” From that perspective, the US is “falling behind as a nation.”

There is a role for world leaders

Education also plays an important part, says Narayanamurti. “We want to excite our kids, excite their imagination, they need to be the inventors.” His advice to young people is to experiment. “Of course you must be passionate about something, but when you’re young, that is the time to experiment, to explore, try different subjects.”