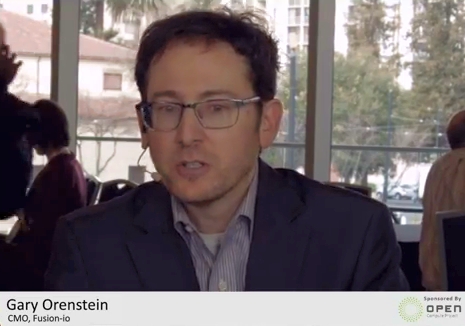 John Furrier and Dave Vellante, theCUBE co-hosts, took off to San Jose, California this week for the fifth edition of Open Compute Project Summit. They caught up with Gary Orenstein, the CMO at Fusion-io, discussing his company’s new solutions and the trends of 2014, including Bitcoin (see the entire segment below).

“It’s a great time to be participating at #OCP, started Orenstein. “The fun part now, as the ecosystem is growing, is becoming easier and easier for people to participate – by contributing ideas and designs, or by acquiring OCP technologies that can be easily deployed in the data center.”

“Today Fusion-io announced two solutions they are working on with a couple of solutions providers: 1) Hyve solution; 2) Quanta computer. With both you can buy fully integrated OCP solutions that include Fusion-io flash memory. This, in my opinion, is a great example of how it’s working its way into the mainstream,” summarized Orenstein.

As Furrier noted, it’s a great trend towards diversity: there are the OpenStack guys on one side and the hardware geeks on the other.

Continuing the update on the company’s news, Orenstein talked next about Open NVM: “Between last year and this show we worked with OCP on a project called Open NVM (Open non-volatile memory), which is the first software project in open compute. In that project there is a collection of technologies designed to use flash in a way that it can best be exploited from an efficiency point of view,” explained Orenstein.

“Some examples of technologies included are Atomic Rights for MySQL, a native key value store for flash which can be used as a plug-in for popular databases, and the Advanced Swap for Linux, making it flash-aware. All of these software initiatives under the Open NVM umbrella share the same mission. We have this new media of flash memory and, beyond just designing great performing and highly reliable hardware products, how can we use software all the way up and down the stack to make that more efficient?”

As far as the processor niche is concerned, Orenstein salutes the Group Hug initiatives and the common socket interface for the motherboard, regardless of the processor choice.

Orenstein believes that “the ability to use new processor technologies combined with new storage technologies and new flash memory technologies in a very efficient, easy to consume package, in an OCP configuration, is goodness for all end-users – be it hyperscale focused or enterprise focused.”

Furrier couldn’t help quoting George Slessmen (CEO and Product Architect at IO): “If people don’t see open compute coming, they will be run over by it.” He mentioned virtual machines running OpenStack on Open Compute.

Orenstein himself had a very interesting point, sharing on Twitter that “hyperscale bleeding into the enterprise” is likely a big theme over the next couple of days. To explain what he meant by that, Orenstein exemplified with Linux:

“When Linux came about, people looked at it with disdain because it was not mission critical and they thought it would never work in enterprise environments. Now, just about every major enterprise is a multi-operating system environment, with large Windows installations as well as large Linux installations, and they still have Unix and mainframe. Linux cemented its place as a significant deployment operating system for the enterprise, and it took a number of years to do so. We’re seeing similar things with hyperscale architecture where you add servers because it’s the best way to do it for these environments.”

What’s next for Fusion-io? Scaling applications

Where do you see taking the Fusion-io brand forward?” asked Vellante.

“We do that across a variety of applications (database applications such as Oracle and Sequel server, MySQL and SAP HANA), virtualization environments (VMware & HyperV), with VDI, with Big Data applications like MongoDB and Cassandra. Because flash is a very disruptive technology, we took the time to educate our customers on the options that are available to them in deploying flash, working with our server OEM partners to make the deployment easy.”

Despite this being a market that Fusion-io jump started in 2007, looking at the rate these technologies are adopted, it’s safe to say that we are still in the early stages.

Wrapping up the conversation with a couple of thoughts on Bitcoin, Orenstein stated that, in his opinion, “any time you can take the friction out of commerce and payments it generally leads to more – and hopefully positive – activity.”

FortiGuard Labs reports major jump in ransomware as criminals use botnets to attack the edge
Here are 5 insights you might have missed from Cloudera's 'Transform Innovative Ideas' event
AWS Storage Day to offer insight into company’s evolving hybrid strategy on Sept. 2
A 10-year journey with MySQL brings Oracle's HeatWave into the query database discussion
Legacy companies use AWS Outposts as a launchpad to the cloud