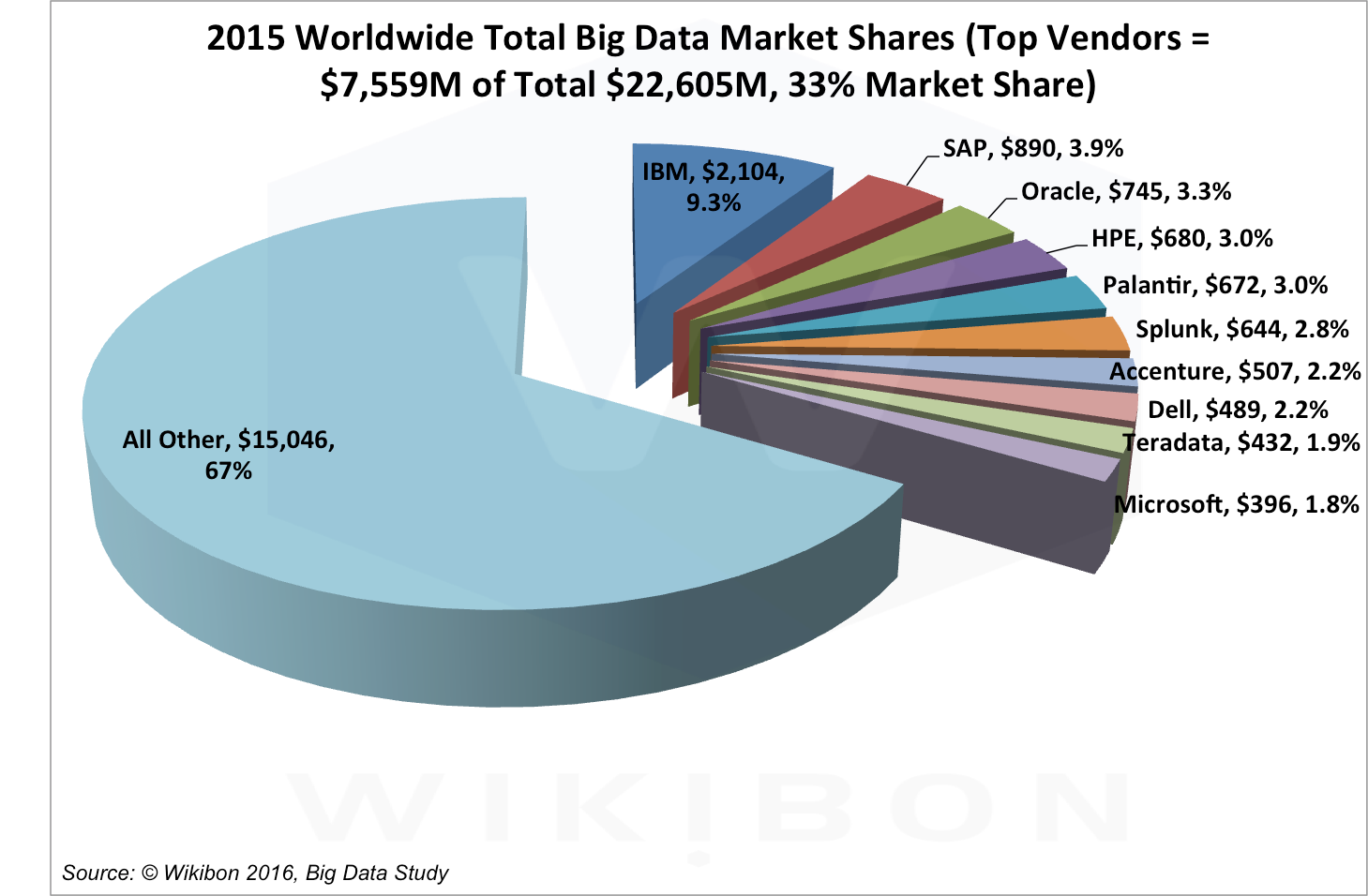 Wikibon has just released its latest 2015 Big Data Market Shares report, highlighting the hardware, software, and services vendors that are likely to lead a Big Data market that’s set to hit $92.2 billion by 2026, according to the research firm’s latest projections.

Wikibon also identified the fastest growing Big Data vendors by revenue in its report. Original Design Manufacturers (ODMs) displayed the most rapid growth, with revenues increasing by $553 million year over year. They were followed by IBM, which saw revenues grow by $333 million, and Splunk Inc. with $193 million. Wikibon also gives a nod to Amazon Web Services (AWS), whose revenues grew by a stunning 166 percent to $149 million, as well as Hadoop vendors Hortonworks Inc., which grew by 151 percent to $118 million, and Cloudera Inc., which grew by 100 percent to $182 million.

Wikibon breaks down its Big Data numbers into three distinct segments, namely Hardware, Software and Professional Services. It notes that while a handful of market leaders are strong in all three segments with offerings across the board, the majority of Big Data vendors participate meaningfully in just one of those segments.

The hardware segment, like the other segments, is dominated by original design manufacturers (ODMs), which command 40 percent of all revenues. As far as branded hardware goes, the recently-split HPE leads the field with its assortment of server, storage and network offerings. HPE pulled in $456 million revenues in 2015, giving it a 7 percent share of the market. Its followed by IBM in second place with $378 million in revenues and a 5 percent market share, with Dell Inc. Cisco Systems Ltd., EMC Corp., Oracle and NetApp Inc. all performing strongly. Amazon Web Services is also included in the top ten, because Wikibon defines its IaaS offerings as hardware since they serve the same function as on-premises hardware services.

The Big Data software market is dominated by database and application software providers SAP SE, Oracle, and IBM, which make up three of the top four vendors due to their widespread software offerings that, according to Wikibon, address every segment of the market.

Splunk Inc. comes in at second place due to its expertise in the IT operations segment, while the top ten is rounded out by companies that focus on product strengths derived from the analytic capabilities of their tools and big data professional service skills, such as Microsoft, SAS Institue, Palantir Technologies and Hadoop vendor Cloudera Inc.

The largest market segment is comprised of the following types of vendors:

Of these, IBM comes out on top with $1.234 billion in revenues and a 13 percent market share. It’s followed by Accenture, Palantir, Teradata and Mu Sigma, which round out the top five professional BiG Data services vendors.

Disclosure: Wikibon is owned by the same parent company as SiliconANGLE