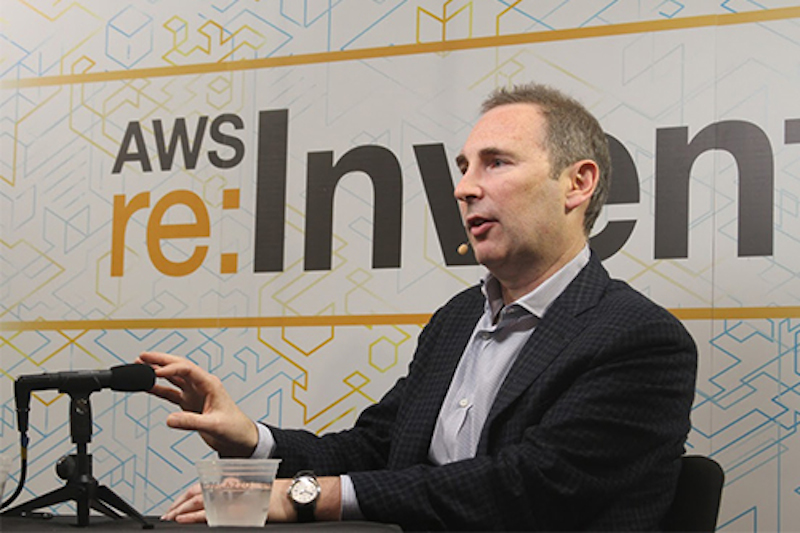 VMware Inc. is set to announce a new partnership around hybrid cloud computing with one of its biggest rivals, Amazon Web Services.

Details of the arrangement are sketchy, but a source close to VMware told SiliconANGLE that there is a significant deal that would allow VMware customers to run the company’s software both in their private data centers and on Amazon.com Inc.’s public cloud, a setup known as hybrid cloud. The deal is expected to be announced on Oct. 13, when AWS President Andy Jassy (above) has set a press conference in San Francisco for a “significant announcement.”

The source also said it’s possible that the deal could involve a sale of VMware assets to AWS, though that possibility was not certain and it was not immediately clear which VMware business unit might be involved. “We can either compete forever or AWS can enable us,” the source said. “We’re in business of enabling private/hybrid/public clouds and providing solutions that can manage cross clouds,” which the source characterized as a “arms dealer” business with “healthy profit margins.”

Whatever is announced, it seems likely that Amazon’s interest is getting access to VMware’s huge enterprise customer base. Although AWS has plenty of enterprise customers, the service’s heritage is startups and individual departments that need easy and quick access to cloud storage and computing resources to avoid building data center infrastructure. VMware’s customers may get more comfortable moving more workloads to AWS if the two companies have a closer relationship.

AWS has been doing other deals with companies serving enterprise customers. Today, it announced a multi-year partnership to integrate its cloud with AT&T’s networking services. On Wednesday, AT&T expanded a partnership with IBM to run virtual networking applications on IBM’s cloud.

Fortune, which broke the story of a likely deal, reported that Jassy and VMware CEO Pat Gelsinger will reveal the details at the press conference next week. The story speculated the partnership could be similar to a deal struck between VMware and IBM last February, which saw the virtualization giant make the bulk of its services available on IBM’s SoftLayer cloud.

However, the fact that Jassy is set to appear at the press conference next week promising a “significant” announcement suggests something bigger could be on the table. He rarely speaks to the media, except for major new announcements. AWS had no comment for this story. A VMware spokesman said it is not commenting on the “rumor or speculation.”

Throwing in the towel?

The source’s statement that VMware is not in the big public cloud business is telling. Whatever is announced next week, it will likely involve some kind of partnership that sees VMware making at least some of its workloads available on AWS’s cloud. But by cozying up to AWS, VMware is effectively conceding that its own public cloud strategy has failed, said one analyst.

“VMware is capitulating, and its public cloud strategy has failed, so they’re going to Plan D,” said Dave Vellante, co-founder and chief analyst at Wikibon, owned by the same company as SiliconANGLE. “Plan A was to own the public cloud with partners, Plan B was to do it themselves, Plan C was to figure out a Plan D.”

VMware has already more than hinted about its plans to accommodate customers’ desire to use hybrid public cloud-private data center setups. At VMware’s VMworld conference in late August, the company announced Cloud Foundation, including services to divide workloads between data centers and public clouds.

Guido Appenzeller, chief technology officer of VMware’s Networking & Security Business Unit, also talked at VMworld about the company’s forthcoming Cross-Cloud Services, a set of SaaS tools based entirely in the cloud. “Why can’t we as VMware provide a new set of tools to manage applications across Amazon [and other clouds], same as we do with applications across HP, IBM, [and other] machines?” Appenzeller said during a presentation. “Well, we can. it’s called Cross-Cloud Services.”

Vellante said that VMware’s new public strategy will be all about offering “choice” to its customers, and that means embracing the leading cloud vendors. VMware is no different to Dell Technologies Inc. or Hewlett-Packard Enterprise Co., in that it has to find some way to accommodate the public cloud, he said.

Without a public cloud strategy, the company is rapidly becoming what Vellante describes as “Old IT.” VMware desperately needs to get away from that and find new avenues for growth in order to placate Michael Dell, which recently completed the acquisition of EMC, majority owner of VMware, and the rest of its shareholders on Wall Street.

“The challenge for VMware is it must continue to grow and serve its masters, and it needs big problems with big markets that it can enter,” Vellante said. “With these deals, VMware is becoming an on-ramp to public clouds which are ‘Hotel Californias.'”

* Disclosure: TheCUBE was the media partner at VMworld. Neither VMware nor other conference sponsors have editorial influence on SiliconANGLE or theCUBE content.

Discover Kubernetes Special Report
Many throats to choke: For better or worse, multiple clouds are here to stay
CNCF to host the Argo Project, for managing apps built on Kubernetes, at incubation level
More things Kubernetes: What else you missed at KubeCon last week
A Goldilocks saga: How VMware seeks to make the cloud and Kubernetes journey just right
Rancher Labs' new release scales Kubernetes to the network edge
View full report coverage