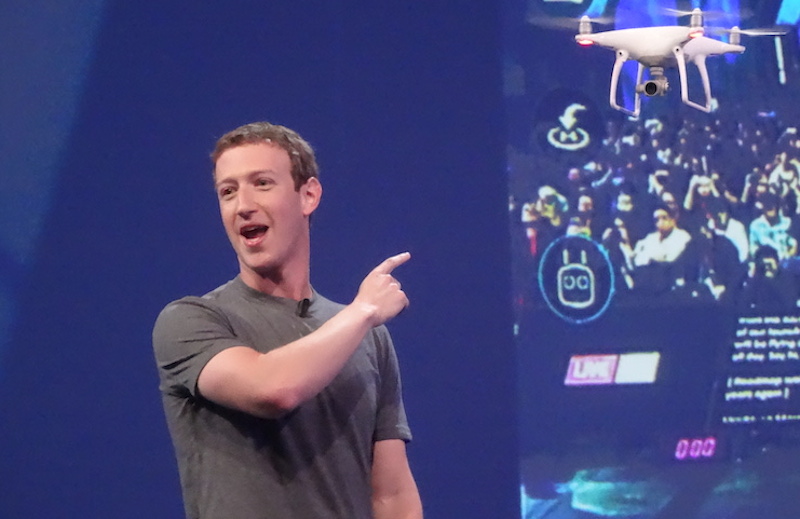 Facebook Inc. again crushed Wall Street earnings estimates today, thanks to all those video ads you’re watching on your smartphone. But investors worry if the good times will last.

The social network reported yet another better-than-expected quarter — cementing, along with search giant Google Inc., a growing duopoly in online advertising. The chief driver was mobile ads, with revenues rocketing 70 percent to comprise 84 percent of Facebook’s overall ad revenues.

Facebook said it earned a profit of $1.09 a share before certain costs such as stock compensation in its third quarter ended Sept. 30, up from 57 cents a year ago. That easily beat analysts’ expectations of 97 cents a share. Revenues rose 56 percent from a year ago, to just over $7 billion, also beating Wall Street forecasts of $6.93 billion.

Investors, however, didn’t like what they heard on the earnings conference call. After shares fell about 1.7 percent in regular trading, they were dropping more than 9 percent, to about $118 a share, in after-hours trading. Facebook’s shares had risen more than 25 percent over the past year.

Next year, growth could slow for other reasons that may worry investors even more. Facebook’s ad load, the number of ads shown in the news feed where most of them run, is likely to fall by mid-2017 because ads are reaching their limit in tolerance by users. As a result, he said, revenue growth will slow “meaningfully.”

That’s what spooked investors. Although Macquarie Securities analyst Ben Schachter said Facebook posted a good quarter, he added in a note to clients that “we are concerned that R&D growth coupled with likely gross margin pressure from hardware, capex-related depreciation, and other data center costs will impact margins in ’17 and beyond.”

Chief Executive Mark Zuckerberg (above) said the company was making progress putting “video first across our apps.” The intent from a business standpoint is to provide more compelling content for brand advertisers that still spend the most on television. Chief Operating Officer Sheryl Sandberg said video ads on Facebook complement TV ads and that advertisers increasingly will move more spending to where the “eyeballs” are, namely Facebook.

“Video is only going to become more important,” Zuckerberg said on the earnings conference call with analysts. The company has been trying to make it easier for people to do live video, for one. Since May, the number of people going live on Facebook has quadrupled. Zuckerberg said he thinks there will be more kinds of interactive video that will be appealing to users and advertisers.

On the business side, he said, “we’re going to keep building ecosystems around products people use every day.” In particular, advertising is starting in earnest on Facebook’s photo sharing site Instagram, and he said WhatsApp is next. But although Instagram revenues are starting a steep climb, WhatsApp, as well as Facebook’s Messenger app, could take longer to make money.

Facebook has been on a tear for several years thanks to new advertising formats and continuing demand by advertisers. Mobile revenues are driving it all. Facebook will gross nearly $22 billion in mobile ad revenues this year, up by 67 percent over 2015, according to eMarketer Inc.

With more than a billion people using its service on mobile devices, Facebook is leading the entire digital ad industry, which in the first half of this year saw mobile ads account for 47 percent of overall online ad spending in the U.S., up from only 30 percent a year ago, according to a new report from the Interactive Advertising Bureau.

“Facebook is still going pedal to the metal when it comes to building out its products and services,” eMarketer principal analyst Debra Aho Williamson said in an Oct. 31 report. “Its flagship service is still growing in every metric that we track, and its other services, such as Instagram, WhatsApp and Messenger, are also performing well.”

Investor reaction aside, Facebook’s earnings outperformance mirrored that of Google, which last week beat earnings expectations on the strength of mobile ads and YouTube video ads. Together, the companies dominate digital advertising, capturing some 68 percent of overall spending, up from 61 percent a year ago. The two companies essentially account for all the growth in the industry, with the rest collectively falling behind.

The bigger issue is whether Facebook can keep finding a home for all the demand by advertisers. Wehner repeated a warning that may not be able to fit many more ads in the news feed, where nearly all of them run, without annoying people. So to keep growing as quickly as it has been, it has to keep finding new users, devise better ads for which it can charge more and run them on more apps and services.

Facebook also needs to keep spending to stoke growth into new markets and stave off competition ranging from Google to Snap Inc. So it’s spending big to build out data centers, create new services such as additional messaging and e-commerce, and build next-generation products such as the Oculus Rift virtual reality headset.

Facebook also is accelerating its efforts to make data centers and networks cheaper and more flexible. On Tuesday, for instance, Facebook announced a new optical networking system to connect farflung data centers, the design of which it plans to share with hardware manufacturers and software companies.

The idea of the device, called Voyager, is to encourage companies to create cheaper and more capable machines to handle the growing crush of video traffic on networks. Facebook has done similar work on other network gear as part of its Telecom Infra Project launched early this year, as well as servers and data centers with its five-year-old Open Compute Project.

While these projects may help lessen the costs of expanding over time, they cost a lot to develop in the short term. So far this year, capital spending is up 76 percent over 2015.

However, expenses are growing much more slowly than revenues. Indeed, Wehner said the company is reducing its estimates for cost growth to the lower end of the 30 percent to 35 percent this year it had previously forecast.