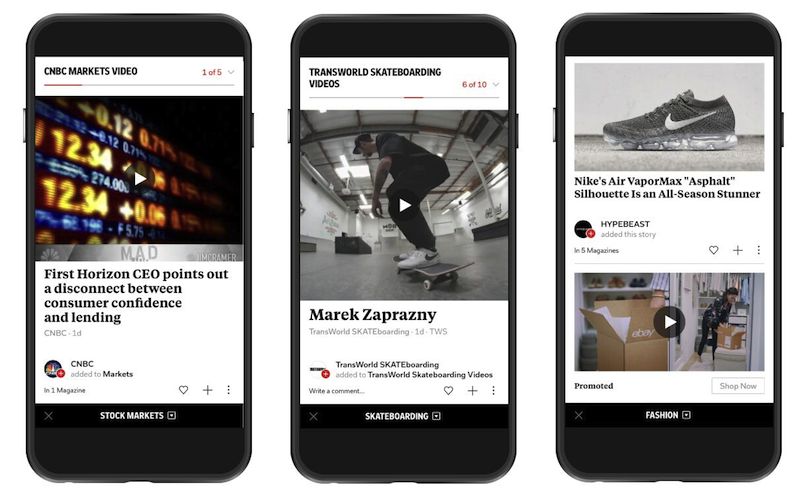 Video collections and automated video ads are coming to Flipboard

Although the company, which aggregates material from selected online publishers and presents them in curated and user-created magazines, has had video, of course, it hasn’t been a prime focus for its users. But with the launch in February of its fourth generation of its services, including “Smart Magazines” that can draw from a wider variety of content and get customized to each user’s preferences, people watched videos a lot more — 38 percent more, in fact. That’s partly because Flipboard added capabilities such as layouts that work better with videos as well as embedded videos in articles.

Among the launch partners for the video packages are ABC News as the “primary” provider of video news coverage, CNBC, four Hearst Digital Media magazines including Marie Claire and Cosmopolitan, and The Enthusiast’s Network’s TransWorld SKATEboarding.

Although that’s a small and rather specific collection of publishers to start with, Chief Executive Mike McCue said in an interview that he’s aiming for what he views as a middle ground between straight television-style video and user-generated video such as on YouTube and Snap. In particular, he’s looking to run video that appeals to enthusiasts of all kinds, such as skateboarders, cooks and photographers.

At the same time, Flipboard will now take video ads using the industry standard Video Ad Serving Template, or VAST. It’s the first time the company has used a standard ad format, having eschewed banner and other annoying ads to date in favor of more magazine-style ads. In fact, instead of running the ads “in-stream” as part of the editorial videos, such as pre-roll ads on YouTube, they will be “out-stream,” or run standalone. They will be auto-play by default, but users can change the default for video ads across Flipboard.

Video ads could provide a boost for Flipboard, which despite its more than 100 million monthly readers has been unable to become a major advertising venue for marketers, partly for the lack of a standard ad format. The ads offer a way to tap into brand advertising dollars, the bulk of advertising overall, that currently go mostly to television. The U.S. digital video advertising market will grow to $16.7 billion by 2020, from $5.2 billion in 2014, according to eMarketer.

“Brand advertising hasn’t really happened yet online,” McCue said. “Video is very promising for that. This will open up a lot of new sales opportunities for Flipboard. We’ve been selling the icing but not the cake.”

Flipboard’s initiative also may be coming at an opportune time. Facebook Inc. and Google with its YouTube unit, which have made video a centerpiece of their revenue strategies, have been heavily criticized lately for running ads next to unpleasant and downright horrible content such as terrorist videos and, in the case of Facebook over the weekend, a video of a murder. Flipboard, which limits which publishers from which it draws content, offers a more controlled environment for advertisers looking for just that.

“The media attention on brand safety is a bit of an opening for Flipboard,” said Paul Verma, an analyst with eMarketer. More broadly, he said Flipboard’s video ads can be a “win-win-win for all parties.” Users want more videos to watch, publishers and Flipboard itself can make their ad inventory more attractive, and advertisers can sell using a standard format they’re accustomed to using. “It makes sense for marketers because it gives them a broader palette.”

Still, despite Flipboard’s embrace of the VAST standard, it will be a heavy lift for any company not named Google, Facebook or Snap to bring the industry around to a new conception of video advertising. “Marketers are starting to be more selective about the platforms,” Verma said. “If anything, it’s even more challenging for Flipboard … because of the proliferation of distribution choices.”

Facebook and Google have been pushing especially hard for several years to draw TV ad dollars with video ads, so they have a long head start on most everyone else, even apart from their dominance of online advertising at large.

For his part, McCue hopes to help provide an alternative to the big guys by offering an automated, or programmatic, video ad that advertisers can run on a variety of other sites to reach a critical mass of targeted audiences. “This could be a way to offer advertisers Facebook scale” across a range of publishers.

McCue said Flipboard, which has raised $210.5 million in five rounds to date, turned cash-flow positive for the first time in February, thanks to a good fourth quarter. However, he said the company will go back into the red for the next few months thanks to ongoing costs.