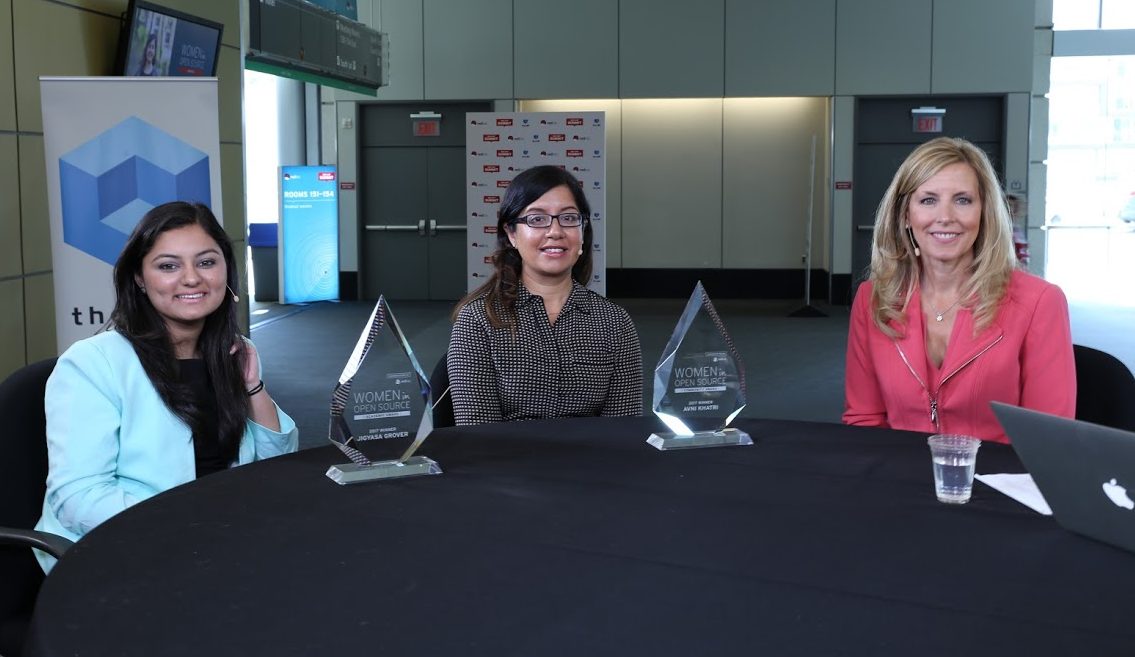 Open source is more than technology. It’s a mentality and a set of principles that may, in fact, be applied to realms outside of technology. Open-source technology and philosophy together may be a potent combo for attacking real-world issues, as this year’s Red Hat’s Women in Open Source Award winners suggest.

Grover is director of Women Who Code in Delhi, India, and the winner of Red Hat’s 2017 Academic Award. Kharti, president of Kids on Computers, took home this year’s Community Award.

This week, theCUBE’s spotlights Jigyasa Grover and Avni Khatri in our Women In Tech feature.

The dearth of women in technology is an issue that an increasing number of technology companies are examining; Red Hat decided to do so in its own way, focusing on open source in particular. “As the open-source leader, we felt like we had a responsibility to make a difference in that way,” Alexander said.

Nominees and winners of this year’s Women in Open Source were chosen, as all things open-source, through blind meritocracy. “It’s community based; it’s the power of participation; it is the open-source way,” Alexander said.

Anyone was allowed to enter a nominee for consideration; then a panel of judges — five for the academic award and five for the community award — selected the finalists. Finally, the open-source community voted on the winners.

Clever, unexpected and innovative uses of open source were nominated for consideration, as were those wrapped in social initiatives, as in the case of Avni Khatri. The winner of this year’s community award was working at Yahoo when her plan to bring tech education to underserved populations sprouted.

“My boss at that time had asked us to make one-year, five-year and 10-year goals,” she said. For her five-year goal, she decided she’d like to bring computer labs to regions of the world with low-tech literacy.

And then a funny thing happened when Khatri attended the Grace Hopper Celebration of Women in Computing conference. The encouragement of other attendees inspired her to take initiate and start manifesting her talent in real projects right away.

“I came back, and I was looking at my goals, and I was like, ‘Why do I have to wait five years to do this?'” Khatri said.

After an email exchange with Stormy Peters, founder of Kids on Computers, a nonprofit that provides computing facilities to underprivileged students, Khatri was on her way.

Khatri just returned from a week in Oaxaca, Mexico, where she worked with Kids on Computers to set up labs in two schools, aided by a grant from Red Hat. “Some of the teachers have never used a computer before. Some of the kids have, but most of them have not,” Khatri said, adding that Oaxaca has one of the highest illiteracy rates in all of Mexico.

Open-source communities makes computing and coding educational resources easily accessible, which is extremely helpful to communities like Oaxaca, Khatri stated. “I think education is one of the most sustainable ways to improve communities, and I think open source is an avenue to get them there,” she said.

On the other end of the spectrum, open-source technology can benefit those at the university level finding that inclusion is more of a cultural problem, according to the academic award winner, Jigyasa Grover.

Grover is currently studying computer science and technology at Delhi Technological University. “Eighty percent of them are boys, and the girls are not much interested in pursuing a career in technology as such,” she said of her class.

While her female classmates may desire to take their degrees into fields like design or civil service, Grover is focused on computing — so much so that she has spent her free time outside of class learning advanced skills. “We were just studying different models of software engineering, but I wanted to be part of a team that actually implements it, so open source was the only way,” she said.

Equipped with nothing more than a laptop and an internet connection, Grover discovered open-source community Pharaoh Tools, which provides DevOps tools for end-to-end automation. Grover was instantly fascinated and has actively contributed to the community for the past three years.

Participating in open-source education programs like Google Summer of Code allows her to give back to the open-source community that fostered her talents, Grover stated. “I try to mentor teenage developers and budding programmers through programs — one of them is Learn IT, Girl! It pairs females, both mentors and men-tees, worldwide,” she said.

This type of of early education is crucial for getting young females interested in technology, said Alexander, who pursues this in her role with Red Hat. “We have a partnership with BU [Boston University] and also the City of Boston where we supported girls coming from middle school into a lab environment and doing some fun stuff and learning to use technology,” she said.

Alexander, Khatri and Grover agreed that education in open-source technology and commitment to open-source meritocracy and experimentation can solve problems inside and outside technology.

“Open source is a mechanism by which we can accomplish not just technical innovations, but also social innovations. And I think we have to look at it holistically,” Khatri concluded.