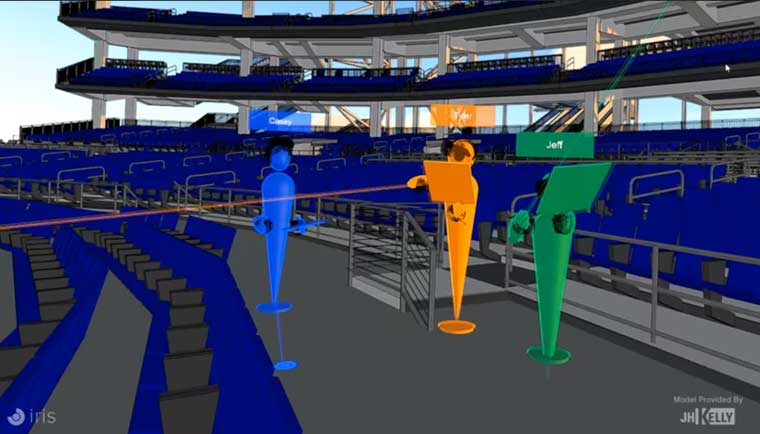 IrisVR Inc., a maker of virtual reality immersive design review and collaboration software, announced Tuesday that its enterprise VR platform for industrial architecture and construction will be getting a new meetings feature.

Architecture and design take a lot of collaboration and work between separate parties, who may sometimes work miles apart. The immersive and collaborative nature of VR can be put to use to gather up remote people into one virtual space and put the tools to interact with 3-D objects at their disposal.

With the update, IrisVR’s Prospect platform will make use of the company’s proprietary multiuser technology and enable professionals from around the world to meet and use engineering and construction industry-standard 3-D models built by software such as Revit, SketchUp and Rhino.

“Meeting in a true-to-scale, digital environment is the next big trend for virtual reality and augmented reality in enterprise markets,” said Shane Scranton, co-founder and chief executive of IrisVR.

Scranton added that VR used to be more of a solitary experience. Users would put their headsets on, became immersed in a different space and use 3-D tools as if the models were touchable right in front of them. However, that’s the only way it differed from sitting in a cubicle, alone with a 2-D monitor and the same software.

The social benefit from VR has been explored across numerous parts of the industry, especially by headset makers and social media apps. Facebook Inc. also owns Oculus VR, the maker of the Oculus Rift, and developed Facebook Spaces, a socially driven VR app that allows consumers to congregate in virtual spaces.

For the enterprise, the social quality of VR adds an extra dimension of capability for design crews to interact with engineers, field workers and supervisory management. Nowhere is the effect of this collaboration as palpable as in architecture, where 3-D models become roadways, bridges and buildings starting sometimes literally from the ground up.

“Now [VR] can truly offer immersive collaboration for our users and their colleagues, no matter where they are in the world,” said Scranton. “Early tests with our customers have shown that this technology will not only improve the client experience and enhance design review, it will also significantly reduce the need to travel while working on a remote project.”

A report from Research and Markets in 2017 predicted that enterprise and industrial VR market growth to $9.2 billion in 2021 from $592.3 million in 2016. The report cited cheaper, mass-produced, consumer-grade VR headsets would make it easier for offices to buy headsets for workers and permit greater collaboration using this equipment with extant and upcoming VR platforms.

Although VR is not a young industry, adoption within enterprise for collaboration has become a lot cheaper with the explosion in consumer-ready headsets such as the Oculus Rift and HTC Vive – and IrisVR’s Prospect software platform will run on both.

As a result, startups have begun to explore VR for meetings such as mobile VR and mixed-reality collaboration platform Visual Vocal, VR enterprise training startup OpenSesame and WorldViz, an immersive VR meeting software developer. Hardware developers are also in on this, producing office products that can be tracked and used in VR, such as Logitech International SA’s VR-capable office keyboard.

Getting into Multiuser Meetings in IrisVR’s software is designed to be swift and frictionless. According to the company, it can be as quick as 10 seconds to enter VR. The platform also attempts to optimize meetings for low latency and high frame rates to keep the experience as comfortable as possible.

Up to 12 users can join in Prospect Meetings at a time and will see the exact same annotations, layer settings and environment, including light and shadows. In IrisVR’s demonstration, participants in a meeting are cast into a stadium while they view presentations. In another, viewers stand within the superstructure of a building looking at infrastructure and pipes.

Although IrisVR’s software is aimed at engineering and construction collaboration, the company also produces platforms for educators and students. The same software, with its Meetings capability, can produce a virtual classroom for pupils across the world to gather in a virtual space with an instructor and learn the craft.