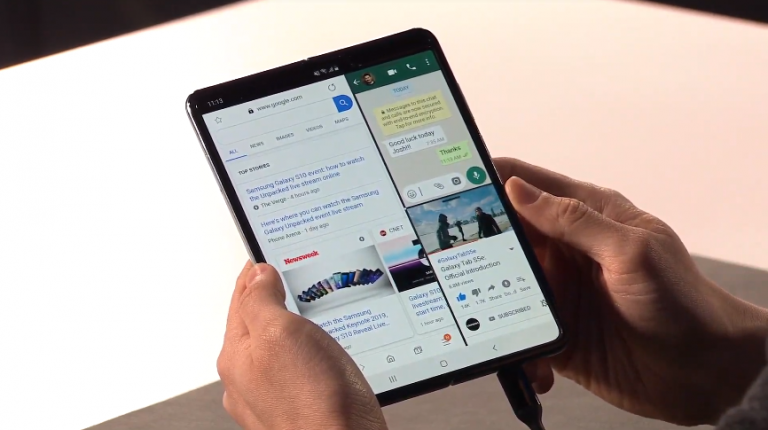 After just two days of use, Samsung’s Galaxy Fold is breaking for some reviewers

Samsung Electronics Co. Ltd. is potentially facing its biggest public relations disaster since exploding batteries in the Note 7, with multiple tech reviewers saying today that their Galaxy Fold devices are breaking after only two days of use.

Samsung debuted the $1,980 Galaxy Fold, the first foldable phone on the market, to much fanfare in February.

The Fold was pitched as revolutionizing smartphones with a device that has a standard 4.6-inch smartphone on one side that folds out to a 7.3-inch display with a 2152-by-1536-pixel resolution.

To deliver its folding functionality, the Fold relies on both a flexible plastic display along with a hinge for the physical folding process, which is where the phones appear to be breaking.

The Verge’s Dieter Bohn was the first to report the issue, writing that his review unit has a defective hinge causing a small bulge in the screen that eventually caused the entire screen to crack.

I got this far peeling it off before the display spazzed and blacked out. Started over with a replacement. pic.twitter.com/ZhEG2Bqulr

The initial reports prompted Samsung to warn that users should not remove the protective film.

Notably, every case in which a Fold was damaged or stopped working was different. In some cases, it was simply the screen splitting, whereas in other cases parts or all the screen would stop working altogether.

Samsung is yet to comment publicly on the reports, but the timing is not helpful. The company has started taking pre-orders for the phone last weekend, with retail sales to start April 26.

It may be that these are isolated cases, but perception is important, particularly with a premium device. Samsung will have its work cut out when it comes to dealing with the issue.