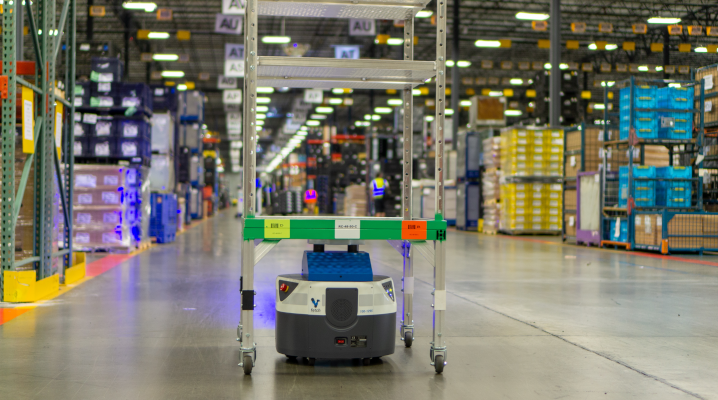 Amazon.com Inc. is far from the only retailer using robots at its fulfillment centers. Traditional chains, pressured by Amazon’s increasingly competitive order processing times, are also embracing automation, and their logistics providers are following suit.

San Jose, California-based Fetch Robotics Inc. is capitalizing on the trend. The startup today announced that it has raised a $46 million investment led by Fort Ross Ventures to put its autonomous warehouse machines in more fulfillment centers.

Fetch sells more than a half-dozen different robots each built for a different role. The startup’s flagship product line, VirtualConveyor, is a family of wheeled systems that help companies move items around in their warehouses. The robots can transport pallets and carts, transfer parts from one conveyor belt to another and fetch items for human workers.

Fetch also focuses on areas beyond merchandise transportation. The startup provides robots for artificial intelligence research, as well as a machine called TagSurveyor that can scan the items on warehouse shelves to create an up-to-date inventory log.

Major industry players have taken notice of Fetch’s technology. Among them is DHL International GmBH, the world’s largest logistics firm, which is using VirtualConveyor units at a Netherlands-based warehouse to fulfill spare parts orders for industrial companies.

A major selling point of Fetch’s robots is that they free up human workers for higher-value tasks. Moreover, the machines can fill workforce gaps for companies struggling to recruit warehouse workers in today’s low unemployment environment. Universal Logistics Holdings Inc., another Fetch customer, is using 10 VirtualConveyor robots to support order processing as it faces labor shortages of as much as 10% in some locations.

The size and variety of Fetch’s robot lineup enable the startup to target enterprises with a fairly broad range of operational needs.  This expansive product family is the fruit of big investments in engineering that Fetch will step up using the new funding. Additionally, the startup plans to expand its robot production line and expand in international markets.

Fetch has raised $94 million in funding to date. The startup previously closed a $25 million Series B round in 2017 that was backed by O’Reilly AlphaTech Ventures, Shasta Ventures and SoftBank, which all contributed to the new investment announced today.