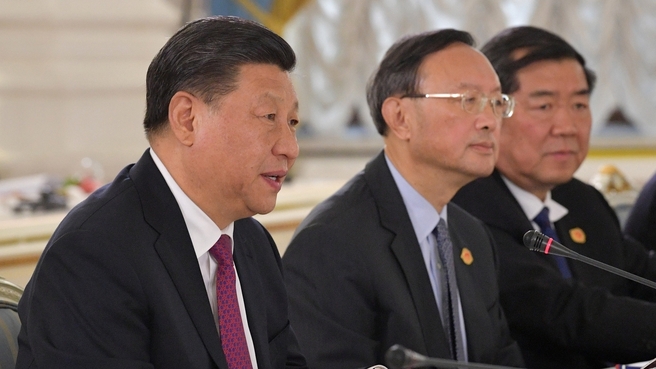 Bitcoin had a remarkable return to form over the weekend after declining over the last month into a bear market. The reason: China.

The cryptocurrency peaked as high as $10,071.47 early Saturday, up 36% in one day to its highest level in five weeks. The jump followed a  report that Chinese President Xi Jinping (pictured) announced that the Middle Kingdom is looking to lead the blockchain revolution. Xi is said to have lauded the benefits of blockchain technology in industries such as finance, education, health care and food security.

“We must take blockchain as an important breakthrough for independent innovation of core technologies, clarify the main directions, increase investment, focus on a number of key technologies, and accelerate the development of blockchain and industrial innovation,” Xi is quoted as saying by Xinhuanet.

Xi noted that blockchain technology should be used to develop the digital economy including the promotion of economic and social development.

Xi didn’t mention bitcoin and cryptocurrencies in the speech, but state-run media, which is strictly controlled by the government, did, including a segment explaining how bitcoin works.

China's state controlled television explaining the basics of "first ever blockchain application" #bitcoin $btc, and how a distributed ledger works

Imagine 1.3 billion people got to know bitcoin because state made an effort to explain how it works. pic.twitter.com/VcIMlxmkQM

Dovey Wan, founding partner at cryptocurrency asset holding company Primitive Crypto, compiled stats from local services and found that there had been a big spike in China of people searching for information about bitcoin and blockchain.

Many ppl asked "How's the ACTUAL reaction on the ground to the Xi Blockchain shill in China" Here I did a quick data crunching on Wechat and Baidu search index, found it pretty interesting

The Middle Kingdom’s embrace of blockchain technology does not necessarily equate to embracing cryptocurrencies, however. The country has a long aversion to allowing its citizens to use them.

China banned bitcoin and cryptocurrency exchanges in 2017 and was considering banning bitcoin mining in April. The leading exchanges moved overseas following the ban and although cryptocurrencies can’t be legally purchased within China itself, that hasn’t stopped mainland Chinese from investing offshore.

Whether the China-based boost is justified or not, the fact that bitcoin has finally broken out of its bear market has investors excited.

The news out of China may have led bitcoin’s price increase, but it wasn’t the only good news during the week.

On Friday, Bakkt Bitcoin Futures hit a daily record of 1,179 contracts traded, up from 640 two days before. The numbers aren’t huge, but the growing demand for the bitcoin futures, which unlike previous offerings are settled in bitcoin itself, is seen as a positive sign of increased institutional investor interest in the cryptocurrency.