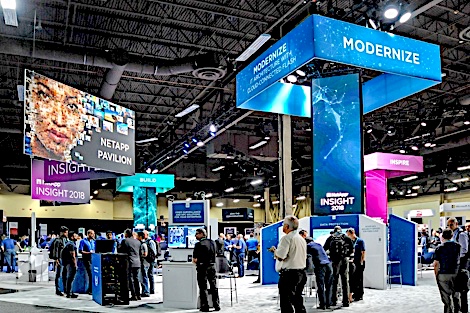 Longtime storage provider NetApp aims to transform into something more

Just one problem: NetApp doesn’t really want to be a storage vendor at all. Instead, it sees itself as a hybrid multicloud infrastructure software provider with its data fabric architecture and associated services squarely in its center of gravity.

At best, this mixed message is transformational, at worst schizophrenic. Is NetApp trying to play both sides of the Innovator’s Dilemma, transforming itself while simultaneously maintaining the status quo? Or is there some method to its madness that requires a more careful look? (* Disclosure below.)

Building on the data fabric

Since taking the reins in 2015, NetApp Chief Executive Officer George Kurian has brought the company on a multiyear transformation – and the work is not yet complete.

At the center of this transformation is a multifaceted offering NetApp calls a data fabric. “To help customers solve the challenges of operating in a hybrid multicloud world, we created the Data Fabric and have innovated technologically across a wide range of use cases,” Kurian explained.

According to its web site, the NetApp data fabric is an architecture and set of data services that provide consistent capabilities across a choice of endpoints spanning on-premises and multiple cloud environments.

What the data fabric most certainly is not, however, is hardware. “We’ve built and delivered the data fabric strategy to simplify and modernize our customer’s data centers and enable success in the hybrid cloud era,” Kurian continued.

Now that the data fabric strategy is a few years old and has reached a certain level of maturity, NetApp is doubling down on its hybrid information technology-centric strategy with its newest offering, Keystone.

Cloud-native computing depends upon a comprehensive abstraction across all environments, including on-premises, private cloud, and public cloud. Such an abstraction should provide a common user experience across all such environments.

That common user experience is a core benefit of Keystone. “It is a combination of programs, services, and products that will dramatically change how customers consume IT resources and give them one consistent experience on any cloud and in their data center,” Kurian said. “Keystone simplifies the business of hybrid cloud data services.”

What about the hardware?

There’s no question the attendees at last week’s NetApp Insight conference (pictured) focused primarily on hardware. The fact that NetApp’s installed base consists mainly of storage professionals is one reason why the company has a hard time moving away from its hardware-centric product story.

NetApp’s executives are well aware of this challenge. “Hardware is a means to an end,” explained Biren Fondekar, NetApp’s chief transformation officer. “Data fabric was the start of our strategy shift.”

The reason? Sedore has to meet the needs of the university’s administration, teaching and research divisions – some of which require vast amounts of storage.

Before going with NetApp, Sedore’s team frequently had to move data from one storage system to another, a process he likened to “terabyte Tetris,” which he said he wanted to avoid.

Even during the keynote, therefore, the horns of the Innovator’s Dilemma were clear and present. On the one hand, Kurian emphasized the company’s long-term strategy for cloud-native computing centering on hybrid multicloud. On the other – Sedore touting “cheap” storage, which deliver razor-thin margins.

Such margins are familiar in the hardware business but anathema for the software side of the industry, making it difficult for any vendor to succeed with a mixed hardware/software offering.

The obvious solution would be for NetApp to sell off or spin off parts or all of its hardware business.

No one at NetApp suggested such a move was in the offing – and given that most of its customer relationships are on the hardware side, a strategic divestiture on such a scale would be disruptive to NetApp’s position in the marketplace. But the appeal of such a move is unmistakable.

A closer look at NetApp’s strategy

A primary economic benefit of the public cloud is not having to buy any hardware. For organizations who desire private clouds, however, they must somehow acquire all the necessary gear, either via purchase, lease, or working with a third-party hosting or colocation provider who includes hardware in its offering.

NetApp sees its hardware offerings meeting this need – helping customers with hybrid IT environments build out their private clouds and then leverage NetApp’s data fabric and Keystone offering to manage and secure them in a manner fully consistent with how the public cloud providers present such capabilities.

In other words, while NetApp would be perfectly happy if customers leveraged its hardware to run its HCI offerings, it would also be content if customers ran HCI on any other hardware – since after all, the money (and the value) are in the software.

Furthermore, abstracting compute, storage, and network aren’t specific to any particular hardware deployment, as such an abstraction is part of the overall cloud-native computing approach to infrastructure.

Trident is a dynamic persistent storage orchestrator for containers. NetApp has implemented Trident as an external provisioner controller that runs as a Kubernetes pod itself, monitoring volumes and automating the storage provisioning process.

Merz was sanguine about Trident’s role in the Kubernetes ecosystem. “The Trident storage orchestrator turns storage into a cloud-native persistence layer,” he explained. “The NetApp data fabric plus Kubernetes provides true workload portability.”

It’s anybody’s guess whether NetApp will spin off or sell its hardware divisions. However, if you step back and look at the overall direction of Kurian’s strategy for the company, such a move might very well be in the cards at some point in the not-too-distant future.

Regardless of how NetApp handles its hardware offerings, the software-centric capabilities it’s bringing to market in the form of its data fabric, Keystone, Trident and other products that align with its cloud-native, hybrid multicloud priorities form a coherent strategy in their own right. It’s a strategy that aligns well with the overall direction enterprise IT is heading over the next few years.

Leading storage vendor or no, it’s high time for the marketplace at large to recognize NetApp as a modern software infrastructure player with a supporting storage offering, rather than the other way around.

Jason Bloomberg, is founder and president of the agile digital transformation analyst firm Intellyx, which advises companies on their digital transformation initiatives and helps suppliers communicate their agility stories. Bloomberg, who can be followed on Twitter and LinkedIn, is also the author or coauthor of four books, including “The Agile Architecture Revolution.”

(Disclosure: NetApp is an Intellyx client, and Pure Storage is a former Intellyx client. NetApp covered a portion of Jason Bloomberg’s expenses at Insight, a standard industry practice.)