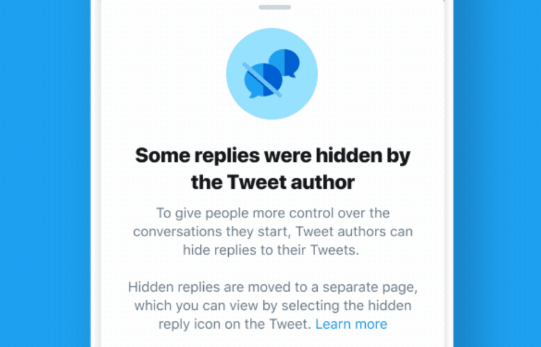 After testing in various countries this year, Twitter Inc. is now rolling out its “Hide Replies” feature worldwide.

“Everyone should feel safe and comfortable while talking on Twitter,” said Suzanne Xie, director of product management at Twitter. “To make this happen, we need to change how conversations work on our service.”

Twitter explained how it works in a blog post today. If someone has replied to a tweet and the sender doesn’t much like that reply they can simply hit, “Hide Reply.” That can also be reversed by selecting, “Unhide Reply.” Other users will be notified that “some replies were hidden” and if they choose, they can view them.

That has led some people to ask, “What’s the point?” According to Twitter, the point is to give users the option to curate the conversation. Since so many conversations go off-topic, Twitter said, it wants to let people block out replies that are “irrelevant” or “annoying.”

While it was thought during the testing stage that many of the hidden replies would be blocked because they sounded toxic or insulting, Twitter said that it was mostly used because people just didn’t feel the comment added anything to the conversation. Twitter also just said in its latest earnings report that now 50% of abusive tweets are flagged before the user can even take them down.

“Some people mentioned that they didn’t want to hide replies due to fear of retaliation as the icon remains visible,” said Twitter, adding that in just over a quarter of cases when someone’s reply was hidden, they said they’d reconsider how they replied to that person in the future. As for public figures and journalists, the company they were hardly using the function.

Twitter said the new option should keep conversations on track and block out mindless insults, although critics fear it could be used to keep an argument one-sided. In cases revolving around cultural issues and activism, those critics argue, the account holder can now better create an echo chamber.

This is a work in progress, said Twitter, and more changes might come once more feedback has been analyzed.

“We’re exploring more options around who can reply to or see specific conversations, and are testing engagement changes to see if these lead to healthier discussions,” said the company. “We’re committed to making sure people feel safe and comfortable talking on Twitter.”