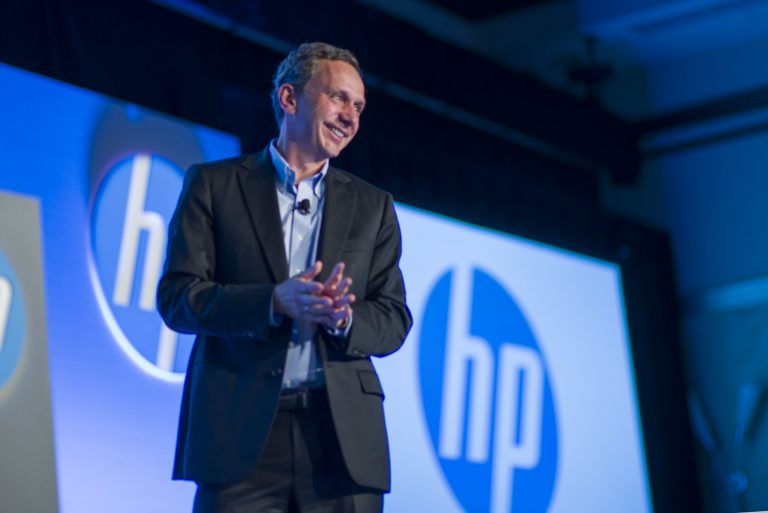 The results come at a tumultuous time for the company, which is struggling to fend off a hostile takeover attempt from the much smaller Xerox Corp. That unsolicited bid came just weeks after HP’s new Chief Executive Officer Enrique Lores (pictured) took over the reins of the company from Dion Weisler, who quit in August, and announced a major organizational restructuring.

HP said its revenue rose by 0.3% on an annualized basis in the quarter, ending a run of six successive quarters of slowing sequential revenue growth.

The main driver of HP’s success in the quarter was the Personal Systems business, which includes its personal computers and laptops. The unit reported revenue of $10.43 billion, up 4% from a year ago and ahead of Wall Street’s forecast of $10.27 billion in revenue.

That helped offset disappointing results in HP’s Printing business, which saw revenue fall 6% year-over-year, to just $4.98 billion, below Wall Street’s $5.03 billion revenue forecast. Lores told CNBC in an interview that printing revenues had taken a hit because the unit was dealing with weakness in key markets such as China and some European countries.

Analyst Patrick Moorhead of Moor Insights & Strategy told SiliconANGLE he was impressed by HP’s performance overall, since it managed to hit its targets on both profit and revenue.

“Commercial PCs led the charge with 8% growth driven by what I believe were strong Windows 7 to Windows 10 upgrades,” Moorhead said. “Consumer PCs were down 4% in a challenging global market environment driven by lowered consumer confidence. Printing was down 6%, not unexpected, in a very challenging environment, particularly in consumer.”

However, Moorhead said he was encouraged by the double-digit growth within HP’s nascent printing-as-a-service and industrial 3D printing businesses, which bodes well for the future.

On the other hand, HP’s PC business could face some headwinds early next year. Chief Financial Officer Steve Fieler said on a conference call that the unit could face problems with computer chip supply constraints in the first half of 2020. Unfortunately for HP, it’s a problem that’s beyond its control, since its main chip supplier Intel Corp. last week warned customers that it was struggling to meet demand and wasn’t sure when it would be able to catch up.

Still, HP is confident that it can still meet its profit and revenue targets for the next quarter. The company issued first-quarter guidance of a profit of 53 to 56 cents per share, the midpoint of which is above Wall Street’s forecast of 53 cents.

In any case, the company’s leadership has more pressing concerns at the moment as it struggles to fend off a bizarre yet determined takeover bid from Xerox, which is around six times smaller than HP.

Xerox raised eyebrows earlier this month with an ambitious $33.5 billion bid to acquire HP. The offer was rejected out of hand by HP’s board of directors, which said it significantly undervalued the company and was not in the best interests of its shareholders. But Xerox has refused to take no for an answer and set a deadline of Monday for HP to reconsider the offer.

Today Xerox upped the stakes when CEO John Visentin announced a plan to “engage directly with HP shareholders to solicit their support in urging the HP board to do the right thing.”

“While you may not appreciate our ‘aggressive’ tactics, we will not apologize for them,” Visentin wrote in a letter to HP’s board. “The most efficient way to prove out the scope of this opportunity with certainty is through mutual due diligence, which you continue to refuse, and we are obligated to require.”

Xerox’s bid appears to be driven by activist investor Carl Icahn, who owns 10.6% of the company’s shares and has recently taken a $1.2 billion stake in HP. Icahn has a long history of agitating for mergers and acquisitions in the tech industry, though he hasn’t always been successful.

“I feel like we have seen this movie before when Carl Icahn meddled with Dell in a similar way,” Moorhead said. “Xerox has been steadily declining in revenue, is running out of options and needs HP more than HP needs it.”

“It remains to be seen if David can acquire Goliath, but so long as HP’s management struggles to turn the ship toward growth, takeover attempts such as Xerox’s may be coming,” Mueller continued. “Moreover, Xerox’s vision of a complete business solution provider is compelling for enterprise executives who would like to simplify purchasing channels and seek synergies for the future of work of their employees.”