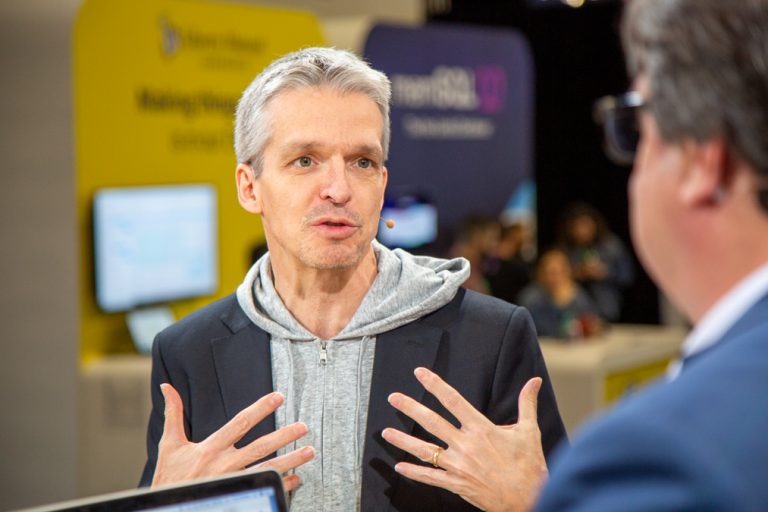 Everything is becoming smarter. Advances in artificial intelligence and machine learning mean that once-futuristic devices are commonplace in modern homes. Voice-activated digital assistants, such as Amazon’s Alexa, help us do everything from navigate a foreign city to set a timer to boil eggs. And new Alexa built-in internet of things devices debut each day. You can even get Alexa in a light switch!

“We have the software on devices, we have the connectivity controlled services, and we have all the analytic services to make sense of the data so that you can take action,” said Dirk Didascalou (pictured), vice president of IoT at Amazon Web Services Inc.

Didascalou spoke with John Furrier (@furrier) and Stu Miniman (@stu), co-hosts of theCUBE, SiliconANGLE Media’s mobile livestreaming studio, during the AWS re:Invent event in Las Vegas. They discussed new advances in AWS IoT and the perennial question: Is the IoT secure? (* Disclosure below.)

Miniman: Your IoT team did a bunch of announcements ahead of re:Invent. The one that caught my eye the most is the IoT Greengrass support for Lambda and Docker. Can you dig into that?

Didascalou: We offer three type of offerings for our customers. One is device software. It might sounds strange that a cloud company actually gives you software that’s not running on the cloud … but you need software running on your devices in order to be able to be controlled by, and communicate with, the cloud. We have an offering in that area called IoT Greengrass, which is a software runtime that you can install in edge devices like Gateways. So, we announced junior editions to our IoT Greengrass. One is Docker support.

This was very important because up until now, Greengrass was supporting machine learning at the edge and Lambda, which is our serverless offering. But, many companies, more established enterprises asked: “… I have legacy applications which I can package. Can I deploy them as well?”

So now you can deploy Docker containers, Lambda functions, and ML at the edge, all with one goal, with Greengrass at the edge.

Miniman: One of the other announcements at re:Invent was about the Alexa voice service integration. If I understand it rightly, it pulls the AWS IoT Core along. Could you go deeper into what that’s about?

Didascalou: So, we launched something called AVS Integration for IoT. And AVS stands for Alexa Voice Services. So if you know Alexa, that’s our digital assistant that runs, for example, on Echo devices.

If, as a third party, you want to build a device which you can directly talk to, which has microphones and speakers. That is called AVS or Alexa built-in devices. And if you wanted to build one today … it needs to have a lot of audio processing. [In] technical terms, you need something like an [Arm] Cortex-A CPU, which makes this device expensive.

So, we were working with our Alexa team saying how can we make this really, really affordable? And we found a trick where we said let’s offload all of this audio processing to the cloud so that you, in essence, can build very dumb devices.

The only thing that these devices now need to do is have microphones, have a speaker, and what we call a wake word detection. Everything else gets streamed to the cloud … so that you can reduce cost for those devices by at least the factor of half.

If you can make so cheap Alexa built-in devices, you can put this into [for example] a light switch. And iDevices, believe it or not, has launched a light switch which you can now directly talk to which talks back and plays your music.

Furrier: When you think about the industrial IoT, security is of paramount importance. It’s not just about a DDoS attack or some malware which causes credit card data. If machines are taken over, people could die. What is the AWS state-of-the-art security posture around software in the edge?

Didascalou: At AWS, whether it’s IoT or any other workloads, we always have to have two priority zeroes: One is security, and one is operations. Because if any company puts their faith in us, if we are down, their business is down. And if there would be any security issues, of course all the trust will be broken.

We do the exact same approach now with IoT. So, we built our services with security in mind. For example, when you connect to AWS IoT Core [managed cloud service], every single individual device should have certificates to be identified … [and] it doesn’t allow you to connect to the cloud without encryption.

We [also] have software at the edge with Amazon FreeRTOS [open-source operating system for microcontrollers] and [AWS IoT] Greengrass, where we support all of the hardware TM modules that you have. We have Secrets Manager. We even have an award-winning cloud security tool called IoT Device Management that at any given point in time audits whether you configured correctly and detects if something’s going wrong. We figure out if something’s going on with your devices.

Furrier: And you feel good as built-in from zero?

Didascalou: You can never be 100% sure, and security is always evolving. But we believe that we are at the forefront of being always the latest and greatest technology in the hands of our customers.

Watch the complete video interview below, and be sure to check out more of SiliconANGLE’s and theCUBE’s coverage of the AWS re:Invent event. (* Disclosure: Amazon Web Services Inc. sponsored this segment of theCUBE. Neither AWS nor other sponsors have editorial control over content on theCUBE or SiliconANGLE.)