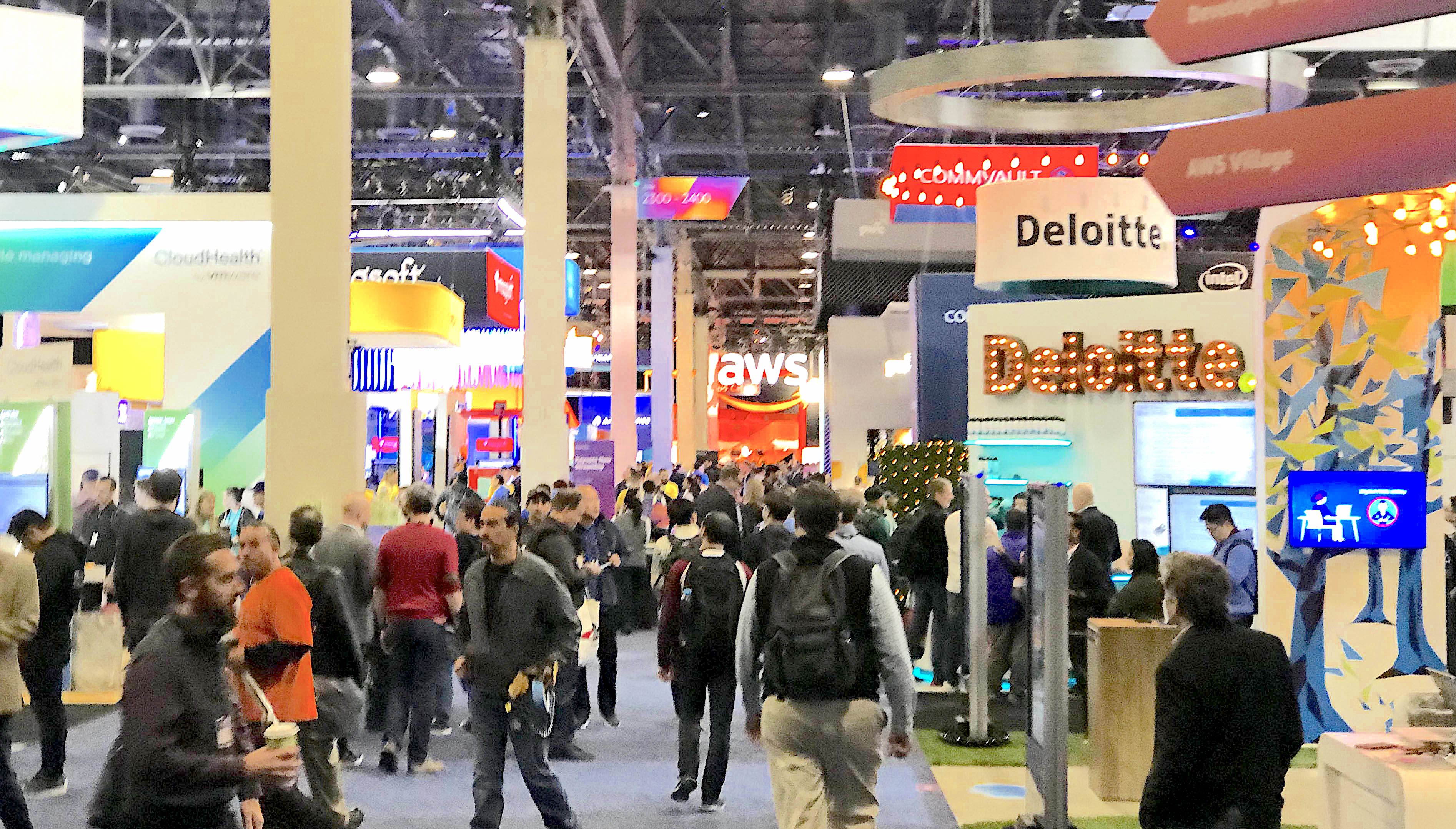 Analysis: Drifting back down from the clouds at AWS re:Invent

Spending a marathon week in Vegas for Amazon Web Services Inc.’s annual re:Invent conference earlier this month provided a nice end cap for the tech event season, and a great chance to catch up with technology leaders and peers with a stake in developing and delivering software in a cloud-native future.

Rather than recapping an event so fully covered in SiliconANGLE and theCUBE, or getting too far down into the nitty-gritty news of more than 75 separate product or release announcements by AWS itself, here are some broader perspectives I took away about the future of cloud development from the experience and conversations I had here. (* Disclosure below.)

Educating a new generation of developers and operations teams

Now that we’ve passed a decade of AWS and cloud computing entering the development world’s awareness, you start to realize that many of the developers and operations professionals in attendance here may have earned their web and mobile development wings working entirely atop AWS as a de facto infrastructure.

This is not to say the “new generation” is all millennials or even Gen Z kids. Thousands of employees and contractors of all ages have reskinned their resumes in a more technical light, while at the same time every business has started becoming a software-defined business.

Now everyone’s doing cloud, much like everyone’s doing DevOps. That movement also started just over a decade ago as an evolution out of small agile teams into something more commonly shared and harmonized across larger organizations outside the core development area.

“It’s a similar big shift,” said Stephen Chin, developer relations head for JFrog. “DevOps was introduced 10 years ago and the early adopters on the leading edge were very special. Now every company, big or small, is doing DevOps – you can’t survive if you can’t get the delivery speed up.”

All this means more hands-on workshops, case studies, certification possibilities packed into each event, and this re:Invent agenda was dominated by developer education sessions, often led by AWS partners or customer practitioners.

One good thing on display here was an increased focus on ops, the all-too-often overlooked part of DevOps. There was lots of innovation around maintaining resiliency and uptime, while optimizing for performance and cost ratios.

“Oftentimes people will get addled if they can’t figure out how to move every last on-premises workload to the cloud, and they will sometimes stall their plan,” AWS CEO Andy Jassy said in the keynote. “It’s easy to run and hide when you have angst about a big change that you have to make, but it doesn’t accomplish very much.”

With pictures of mainframes ready for moving day in a home’s driveway next to Amazon boxes, Jassy took shots at giants such as Microsoft Corp. and Oracle for egregious licensing fees, not being as responsive to developer needs and attempting lock-in on their platforms.

To that end, AWS doubled down on their Migration Acceleration Program, with transformational stories from the likes of Goldman Sachs and Cerner, along with migration tools and partner competency centers per industry vertical.

“Almost every conversation we had about cloud this year shifted from lift-and-shift to modernization of monoliths,” said Todd Osborne, general vice president of alliances and channels at New Relic Inc. “Not just moving servers and VMs to cloud, but utilizing Kubernetes and serverless technologies. Observability is basically a must-have if you are working with containers and ephemeral services that deploy several times a day.”

What if you were a vendor hearing all of this?

AWS CodeGuru automatically handling code reviews with machine learning algorithms? Imagine what you might think about that as a software quality vendor.

You want to build artificial intelligence? Now the AWS SageMaker machine learning service, two years in, has a new Studio IDE, notebooks, even an Autopilot tool. Why go anywhere else?

Hell, they are even making their own Arm processors, specially optimized for cloud compute.

Although all those advances are fantastic for AWS-based application ops teams and developers, they don’t replace those categories so much as add additional routes to larger application initiatives that will always have some heterogeneity to deal with.

“The primary concern will become not the technology itself, but educating practitioners on the right way to shift to newer cloud and microservices architectures, which are scalable by nature, but may not function correctly or securely in production,” said Ken Cheney of the serverless observability firm Thundra Inc.

It’s all about moving the data now

AWS has grown quite a data business around warehousing in S3 buckets and Redshift, and it has announced new innovations for access control, data analysis, high performance AQUA querying, separate scaling of storage and compute, managed Cassandra, and storage management, atop a host of its own specialized databases.

With the increased velocity and volume of data showing no signs of breaking the limits of cloud capacity, much of the conversation here has focused on how to rapidly move and filter that data using advanced intelligence, so some value can be gleaned from it.

“We’d agree with Andy that all of this data is going to move to the cloud, and for instance, some of it will move to AWS, and away from Oracle’s cloud,” said Peter Guagenti, chief marketing officer of MemSQL  Inc. “But we do believe we’ll see data moving to multiple cloud providers and on-premises private data lakes well into the future.”

AWS has even packaged itself to offer enterprise VMware regions in their own cloud, while moving itself out to customer sites with its Outposts local deployment options.

“The market is changing, just like when Microsoft renamed Synapse, and Databricks reformed as a data structure and not just a data lake,” said Dan Potter, vice president of product marketing for Qlik Technologies Inc. “People will find a way to move data where they need it. Just look at Amazon RDS on Outposts – we’ve crossed the chasm to hybrid IT, and even the biggest cloud vendor recognizes the answer is somewhere between cloud and on-premises.”

Yes, they will bring the hardware to you. I can’t help but be reminded of when Amazon (the parent company of AWS) started opening actual retail bookstores after destroying most of that market.

The cloud development movement at re:Invent is bigger than AWS itself.

There were the salad days of the born-on-the-cloud (and born on AWS) unicorns: Netflix Inc., Airbnb Inc., Uber Technologies Inc. and the like. That particular shift period was very short-lived, a few early adopters on the bleeding edge of the bell curve.

Although all the demos shown at re:Invent were, obviously, running on AWS, and many of the products on offer are selling quickly through the AWS Marketplace, a couple of questions with most vendors or customers will lead to a hybrid IT discussion, and perhaps even a specific multicloud scenario as a quiet aside.

AWS may be the biggest cloud provider, but the industry shift cloud represents is way bigger than that, and that feeling permeated the show.

“We’re witnessing the Dreamforce for geeks here,” says Brian Goldfarb, CMO of Chef Software Inc., referring to how the Salesforce.com Inc. show became more of a destination point for any sales and marketing tech discussions, rather than being only about the Salesforce CRM product.

“The scale of the event for cloud in general, the scope of vendors and the industry expertise represented here, blocks out the sun,” he added. “It’s called AWS re:Invent, but it’s not just an AWS show, re:Invent is a whole industry show.”

Looking at the broader ecosystem of hundreds of partners that serve AWS customers, you get a sense of bigger cycles for overall application development and testing, data management, security, performance and user experience that are greatly enhanced by on-demand cloud environments.

It’s hard to take in all of the changes seen here without feature fatigue, and that sentiment was echoed by several professionals I talked to. After all, who among this audience could be concerned with root-level infrastructure and chips, but at the same time data lakes, machine learning, bank fraud and music composition?

In the largest possible sense, all of this hubbub is simply the cloud becoming as common a platform as the internet itself, and that’s OK.

Even if my brain was baked by all the 5G transmissions being beamed out by Verizon and AWS Wavelength, delivering compute and storage right to the edge, it’s still an amazing time to be alive.

(* Disclosure: At the time of writing, Evolven, NetScout and New Relic are Intellyx customers. Microsoft and Chef are former Intellyx customers. None of the other persons or vendors mentioned here is an Intellyx clients. AWS covered Jason’s attendance cost for re:Invent, a standard industry practice.)

Jason English is principal analyst and chief marketing officer at Intellyx LLC, an analyst firm that advises enterprises on their digital transformation initiatives, and publishes the weekly Cortex and BrainCandy newsletters.