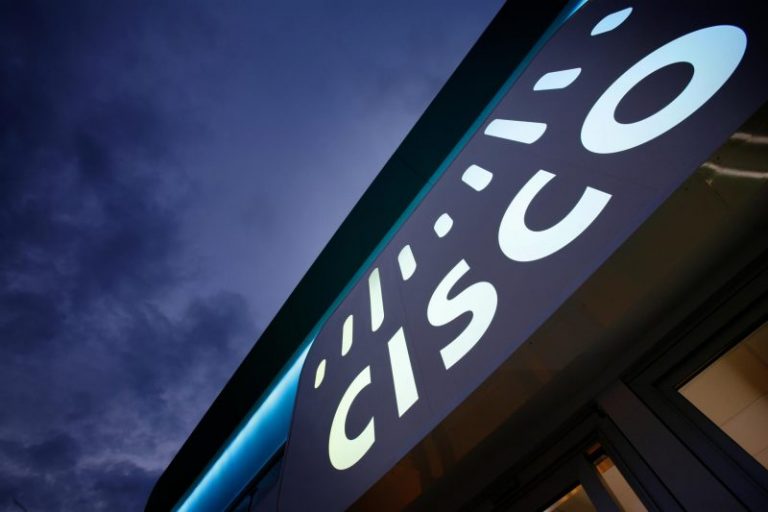 Networking giant Cisco Systems Inc. falls under the microscope this week as it heads into its annual Cisco Live Barcelona user conference, in what will be one of the first major enterprise technology events of the year.

Cisco is currently in the midst of a long, multiyear transition that sees it trying to refocus its business while still maintaining its strong leadership in several key segments, not least of all its primary networking market. This transitional period is all the more interesting because it comes at a time when emerging new technologies such as 5G and Wi-Fi 6 are expected to see much more widespread adoption, with Cisco fully expecting to be at the forefront of that movement.

A quick look at Cisco’s recent financial performance reveals the company is entering this new era from a position of strength. As Dave Vellante, chief analyst at SiliconANGLE sister market research firm Wikibon and co-host of SiliconANGLE’s video studio theCUBE, relates in his latest Breaking Analysis video, the company is placing its bets on key segments it has identified, including the data center, wireless, collaboration, security and edge computing. And so far those bets have largely paid off: Cisco remains an extremely profitable company, with revenue in excess of $50 billion a year and a market cap of $200 billion-plus. 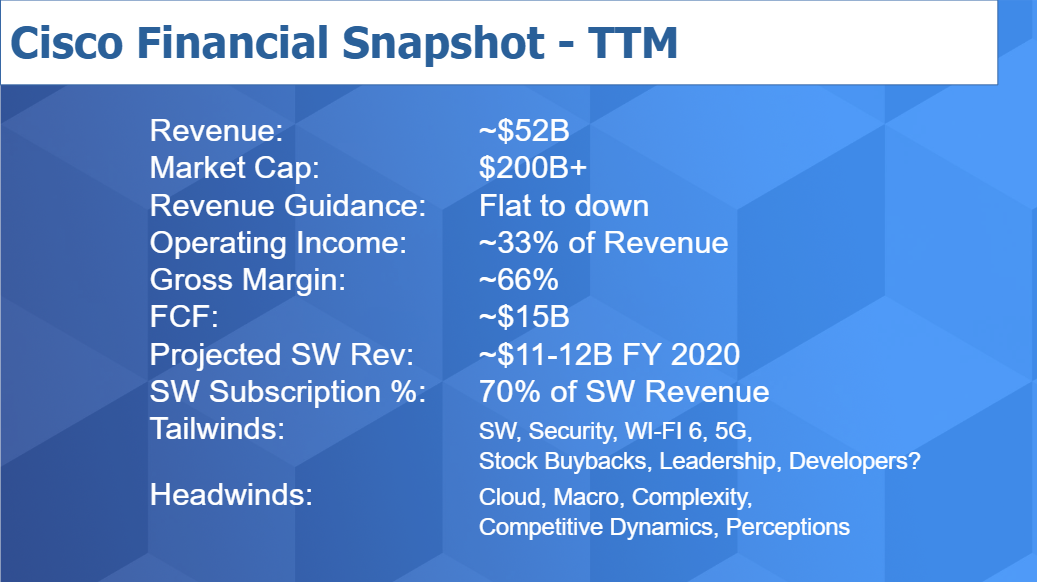 “A four-times revenue multiple is pretty good for a company viewed as a traditional hardware player,” Vellante said. “Cisco is a very profitable company with 33 percent operating margins and a very nice 66 percent gross margin.”

Cisco is raking in the cash thanks to its continued dominance of the overall networking market. A key to watch is will its free cash flow continue to stay strong and enable Cisco to be aggressive with stock buybacks and dividends that prop up the stock.

Enterprise Technology Research’s latest data on market share (X-Axis below), which is a measure of pervasiveness in its spending surveys, shows that Cisco is far outpacing its rivals. The company’s net score, on the Y-Axis below, which measures spending velocity, is solid. Meanwhile, the Net Score for the overall networking sector is also holding firm at about 25%– not great according to Vellante but steady. 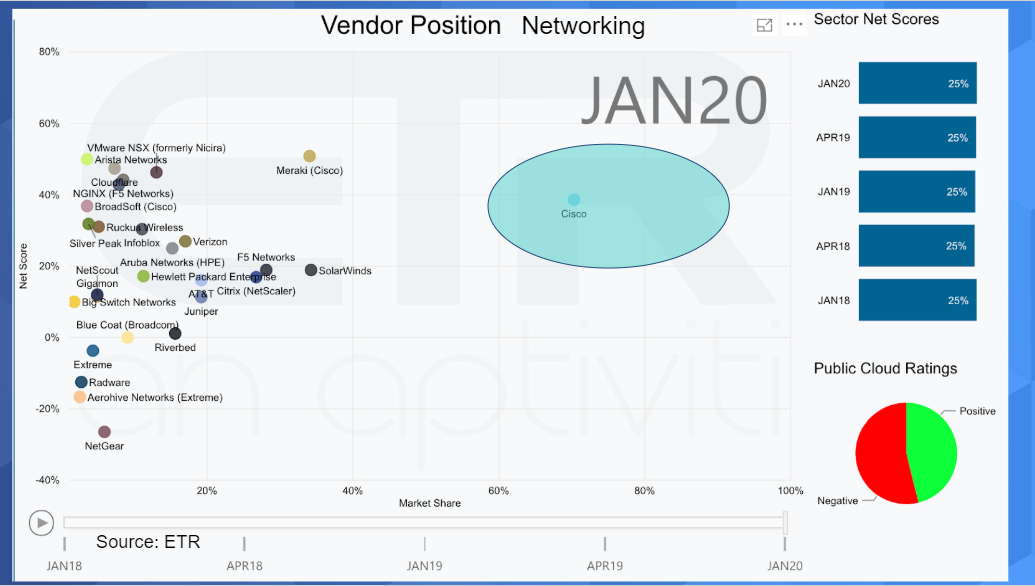 That’s not to say Cisco doesn’t face any headwinds. It does, with the biggest threat to its business coming from the rise of cloud infrastructure providers such as Amazon Web Services Inc. and Microsoft Corp. causing enterprises to spend less on networking equipment than they have in previous years.

“You can see the impact that the cloud is having on Cisco, much the same way it is affecting virtually every large supplier of on-premise infrastructure,” Vellante said. “A slow, steady decline over the past 10 years. And you can see it in Cisco’s net score, which measure spending intensity, in the upper right corner of almost 30%, which is somewhat lower than Cisco’s average in the data set.” 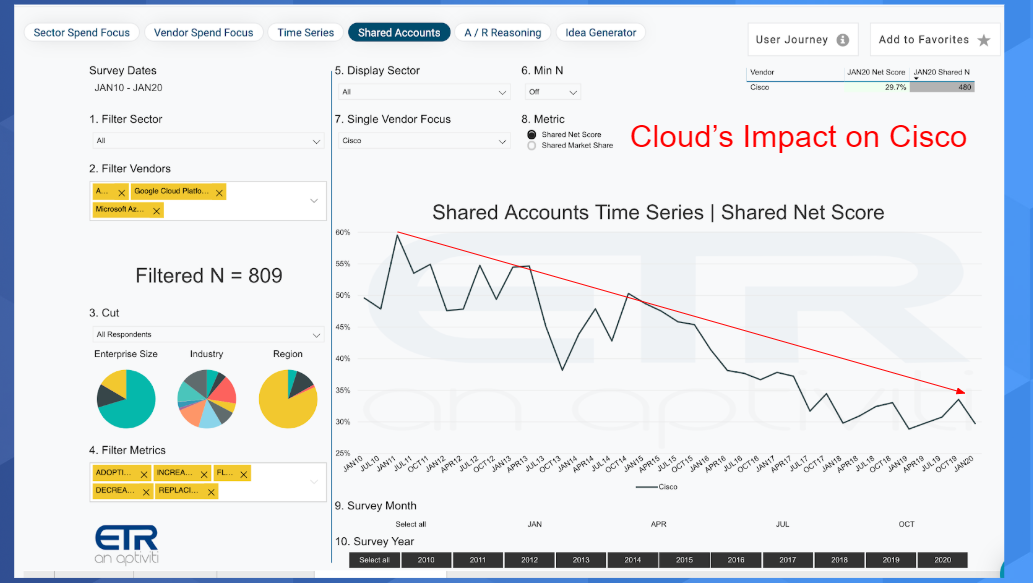 Still, Cisco continues to perform well against its main rivals when we take a look below at its pervasiveness in fast-growing market segments combining cloud, data and artificial intelligence to assess Cisco’s performance. Cisco, with a net score of 37.4% is bested only by VMware Inc.’s relatively new NSX offering.

“Cisco is holding its own here, but its challenge in my view is to use data and AI to create better customer experiences and compete in the multicloud market directly with these players and others, none of whom own a public cloud,” Vellante said. 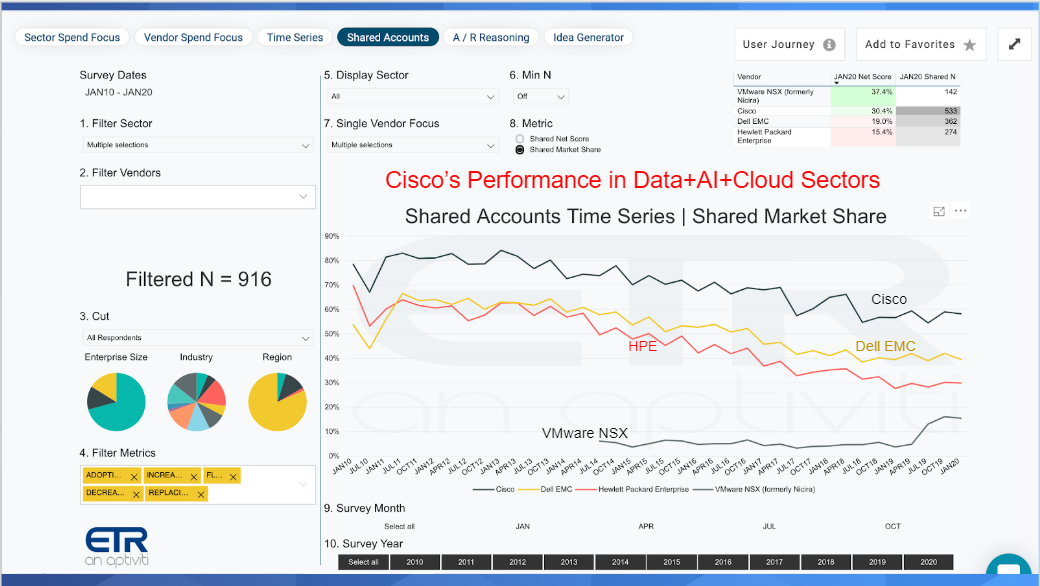 Indeed, Cisco seems to be holding its own across what Vellante has identified as its ten important market segments in the ETR dataset, including its core networking business (routers and switches); AppDynamics, which is application performance management; Cisco Umbrella, its cloud and DNS security play; and Springpath, which comprises infrastructure for Cisco’s hyperconverged systems.

But the competition is tough in all segments: ETR’s data on spending velocity in the collaboration, or video conferencing market for example, shows that Cisco is facing a tough fight against the likes of Microsoft Corp. with its Teams product and new entrants such as Zoom Video Communications Inc. as shown in the chart below. 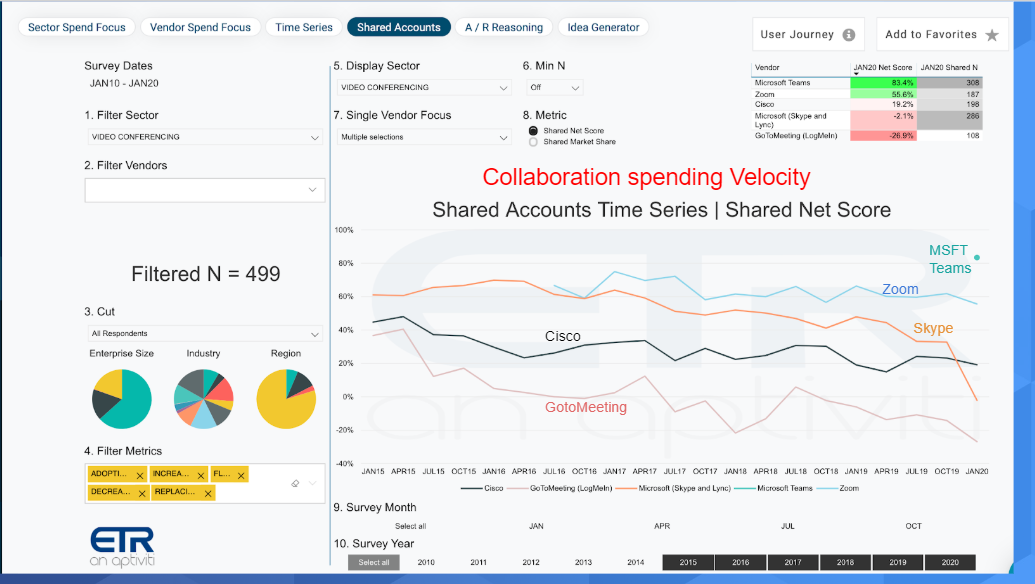 The company is faring well in security, where its business grew 22% in the last quarter and enjoys a $3.2 billion annual revenue run rate. That’s mostly because security as a whole remains a fast-growing segment, though Cisco’s spending momentum is still notably less than that of rival firm Palo Alto Networks Inc. and emerging players such as CrowdStrike Holdings Inc., Okta Inc. and other high flying players. By comparison, however, Cisco is showing much stronger spending intention momentum than other leaders such as IBM and Symantec. 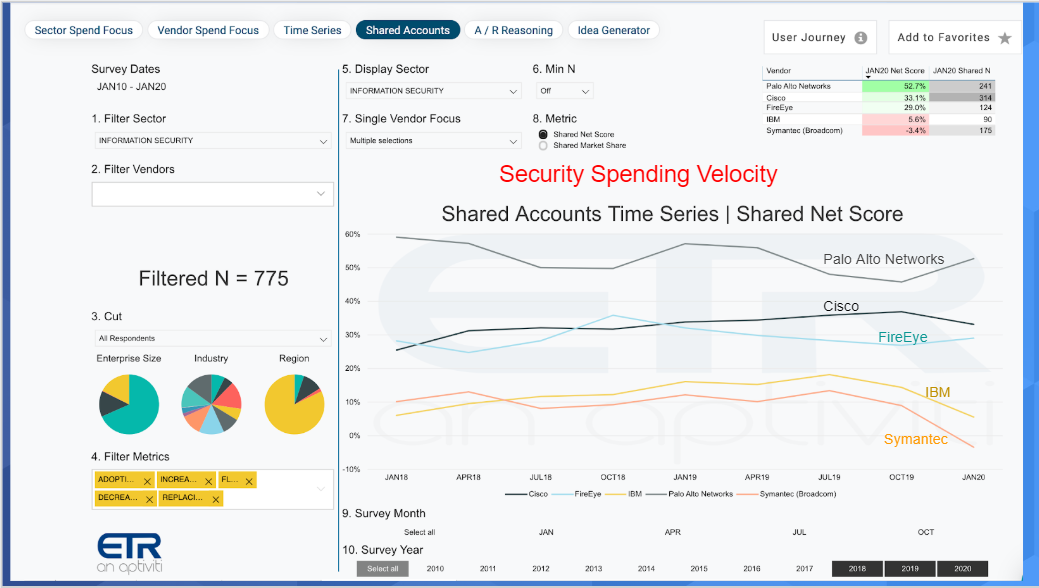 Anther key area for Cisco is hyperconverged infrastructure, which refers to software-defined platforms that bring together storage, compute and networking. Cisco has some tough competitors here too, with the likes of Nutanix Inc., VMware with vSAN, and Dell EMC with its VxRail offering. As shown in the chart below, Nutanix currently leads the way, but every one of those companies is benefiting from strong spending velocity as the market itself is still nascent.

“Here’s the thing about Cisco: On the one hand it’s putting out its own HyperFlex platform based on the SpringPath acquisition,” Vellante said. “But it has to tread carefully because it partners with converged players such as NetApp with FlexPod and IBM with VersaStack, and it has Cisco HyperFlex, which is a hyperconverged infrastructure play that’s designed to replace these converged platforms.” 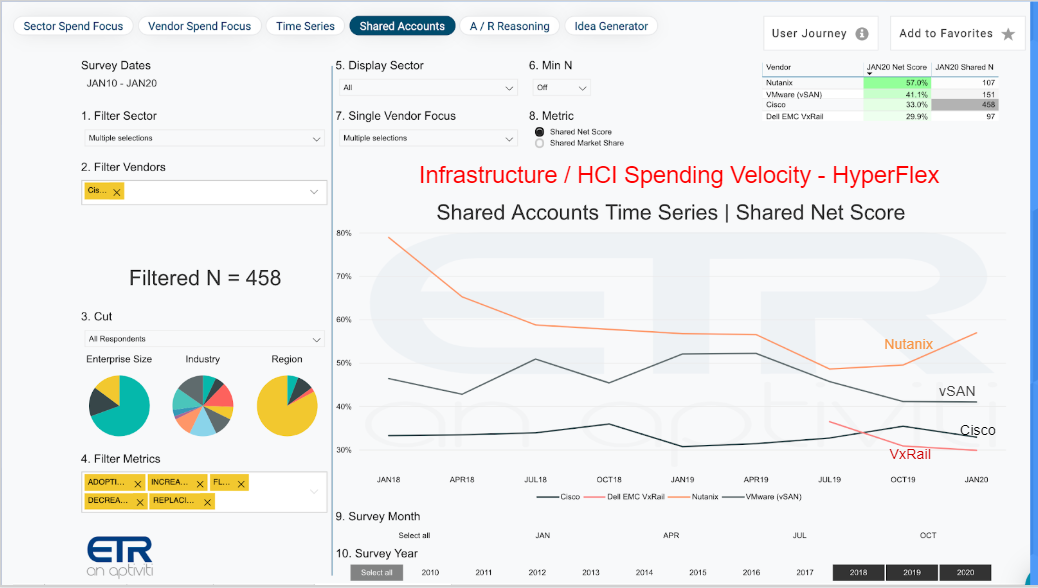 How Cisco will fare in these critical markets remains to be seen, with its success likely to be dependent on several factors. For one thing Cisco will be keen to speed up the pace of its transition to software, while the rollout of 5G will be closely watched as this is expected to be a big tailwind for the company.

In December, Cisco announced new core routers and SiliconOne— a new chip that it will also sell on the open market. Along with supercharged optics these announcements could power the next wave of service provider innovation.

On the developer front, Cisco is pushing its “infrastructure as code” strategy that should help it to power new workloads in multicloud and edge computing.

Cisco is also vulnerable to macroeconomic conditions to a certain extent, with officials having previously warned that the company as a whole is expecting a “flat to down quarter” with regard to its bottom line.

Finally, there’s the continued impact of the cloud on Cisco’s business as a whole. “Cisco has to position itself as the best, most cost-effective, most secure and highest performing network to connect hybrid and multiclouds,” Vellante said. “Cisco has to hold serve in networking, which I fully expect it to do.”