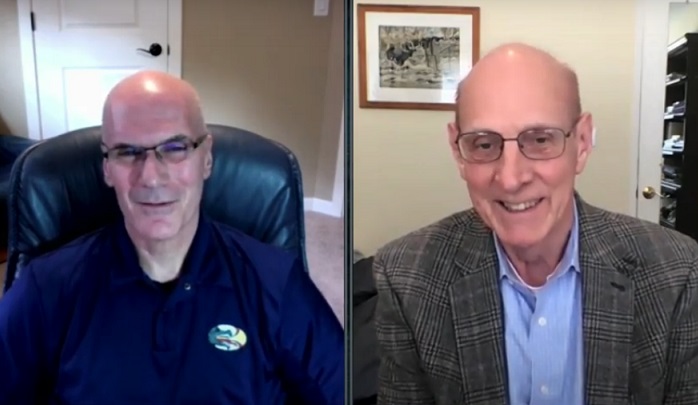 The database used to be boring, but it’s not anymore.

A measure of how much focus there is now can be found in the decision by Gartner to release two comprehensive reports in late November that covered critical capabilities in the cloud database market, in addition to a new version of its Magic Quadrant for the space.

As the Gartner reports highlight, the cloud database market is being driven by the need for transactional capabilities meshed with analytics.

“The use case that’s becoming more prevalent is the integration of transaction and analytics,” said Marc Staimer, (pictured, left), president and chief dragon slayer at Dragon Slayer Consulting. “It’s not just your traditional data warehouse, but it’s AI analytics, big data analytics. Users are finding they need more than just simple reporting; they need in-depth analytics so they can get actionable insights into their data where they can react in real time.”

Staimer spoke with Dave Vellante, host of SiliconANGLE Media’s livestreaming video studio theCUBE. He was joined by David Floyer (pictured, right), co-founder and chief technology officer of SiliconANGLE sister market research firm Wikibon Inc., and they discussed factors affecting the ranking for key players in the cloud database management space and how fast-rising competitors such as Snowflake fit into the evolving picture.

Gartner’s reports focused on critical capabilities in cloud database management systems for both operational and analytical use cases. In both reports, Oracle was ranked at the top in three out of four categories.

Oracle’s perceived advantage in the market is based on its linkage between on-premises and cloud, according to Floyer.

“Exactly the same system is running on-premises or in the cloud; you can have them joined together,” Floyer said. “That’s unique in the marketplace, so that gives them a very special place in large customers that have data in many different places. Having the data in one place, where you don’t have to move it, you can go directly to it, gives you enormous capabilities for a single database type.”

However, Oracle’s advantage over the competition in this regard appears to be offset by the revenue strengths of the three largest public cloud competitors. Gartner’s Magic Quadrant places Oracle behind AWS, Microsoft and Google.

“It didn’t surprise me in the least because of the way that Gartner does its Magic Quadrants,” Staimer said. “The higher up you go in the vertical is very much tied to the amount of revenue you get in that specific category in which they’re doing the Magic Quadrant. A big chunk of Oracle’s revenue still comes from on-premises, not in the cloud.”

As the leading player to date in terms of public cloud market share, AWS brings its own competitive product – Amazon Aurora – to the relational database ecosystem. However, the company continues to lag behind both Oracle and SAP’s HANA Cloud in Gartner’s traditional and augmented transactions processing use cases.

“With the smaller customer, that’s the heart of AWS,” Floyer said. “They are taking their applications and putting them all into one cloud, and Aurora is a good choice. When you start to get to requirements, as you do in larger companies, of very high levels of availability, the functionality is not there.”

Where does upstart Snowflake, which debuted its public offering earlier this year with the largest software IPO in history, fit into this picture? The company remained narrowly out of the coveted “upper right” leaders’ portion of the Magic Quadrant in Gartner’s analysis, yet it still led Microsoft and Google in analytical capabilities.

“Snowflake is growing incredibly fast, and that doesn’t reflect in these numbers from my perspective,” Staimer said. “They’re on the analytical side; they don’t do any transactional processing. What they’re focused on is sharing data among customers.”

Here’s the complete video analysis, one of many CUBE Conversations from SiliconANGLE and theCUBE: