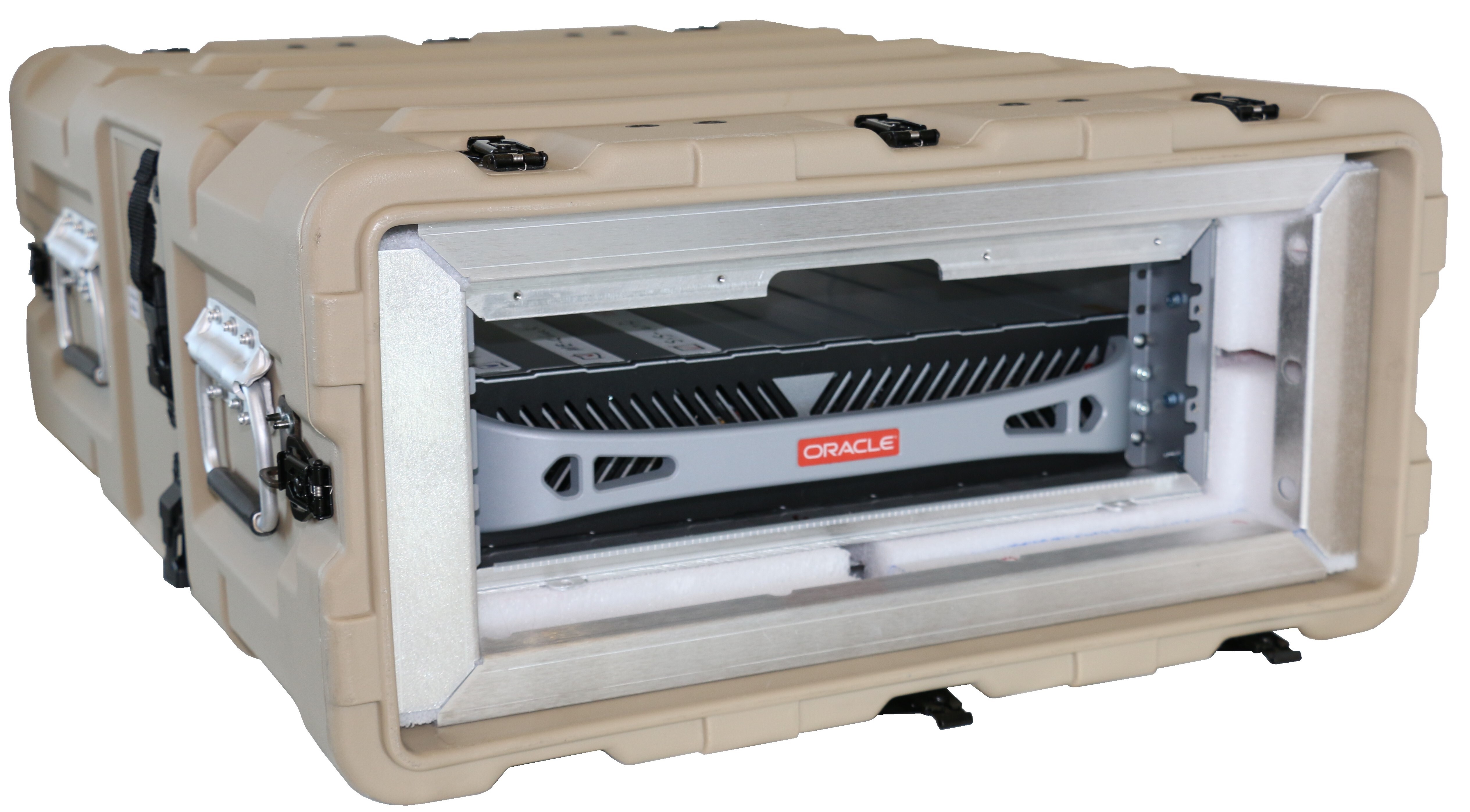 Oracle plays for the edge with rentable ruggedized servers

In a play for the rapidly growing market for cloud services at the edge of the network, Oracle Corp. today introduced Oracle Roving Edge Infrastructure, a ruggedized, portable and scalable server node that is compatible with Oracle Cloud Infrastructure.

The company said customers can use the new hardware appliance to run cloud workloads wherever they need them, even in remote and disconnected locations.

Each of the 88-lb. devices features 40 central processing units, 512 gigabytes of memory, an Nvidia Corp. graphics processing unit and 61 terabytes of solid-stage storage for a flat fee of $160 per day per node. Each unit is encased in a military-grade ruggedized shock-mount case and is electromagnetically shielded to limit emanations and interference.

“It’s a remotely tethered compute storage appliance with the data plane in one place and the control plane in another,” said Ross Brown, vice president for Oracle Cloud Infrastructure. “This is about all-out performance, the fastest processing as close to the data as possible.” Oracle is no stranger to this market, Ross said. “We’ve been doing ruggedized servers for military work for a while.”

The announcement comes a little more than six months after Oracle rolled out Dedicated Region Cloud@Customer, a full version of its cloud stack that customers can run inside their own data centers. In cloud computing terminology, a region is a physical data center that usually hosts an entire stack of cloud services. Oracle furnishes all the hardware and software along with the ability for customers to manage the region through a single console.

All major cloud providers now offer on-premises versions of their cloud infrastructure. That’s seen as important in extending their services to the edge of the network, where Gartner Inc. predicts three-quarters of enterprise data will be managed by 2025.

Oracle differentiates its approach to hybrid cloud services by giving customers greater control than competitors do over their cloud environments, Ross said. He cited the Oracle Cloud VMware Solution that the company announced in partnership with VMware Inc. last summer as giving customers “complete control over their VMware environments.” In contrast, the competing service from rival Amazon Web Services Inc. prohibits customers from changing the version of the hypervisor or firmware they use, he said.

Roving Edge Infrastructure is associated with a customer’s tenancy in an Oracle Cloud region. It can be used to run cloud applications and workloads in the field, including machine learning inference tasks, real-time data integration and replication, augmented analytics and data warehouses. This enables data to be collected and analyzed close to the point of origin. The devices automatically synchronizes with Oracle Cloud’s Object Storage whenever network connectivity is available.

The device is packaged for convenience. “It’s an Oracle Cloud Infrastructure experience,” Ross said. “You pick it up or Oracle will ship. Use it as much is you want and when you return it we wipe the storage and return it to use.” Packaged software includes a full Oracle cloud operating stack as well as the Oracle Autonomous Database and MySQL, the open-source database that Oracle owns.

Oracle now has 29 cloud regions in operation and will add nine more this year, with most in physical proximity to Microsoft’s Azure regions to provide “two-millisecond latency between us and Microsoft,” Ross said.