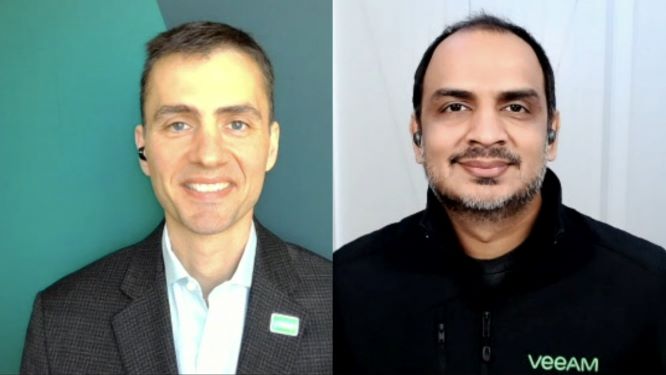 The rapid growth of hybrid cloud and container applications has created a new concern for businesses and IT companies: how to ensure that data remains protected in a highly diverse operational landscape.

This concern was what moved the data protection giant Veeam Software Inc., which had been growing mainly organically, to acquire the startup Kasten, focused on data backup, disaster recovery and mobility for Kubernetes.

“The amazing thing about containers is that it allows you to connect multicloud, hybrid cloud, the edge to the core, and they’re designed for the consumption world,” said Danny Allan (pictured, left), chief technology officer of Veeam. “And so, because they are designed for a consumption-based world, because they’re designed for portability across all of these different infrastructures, it only made sense for us to invest in the industry’s leading provider of data protection for Kubernetes, and that, of course, is Kasten.”

Allan and Niraj Tolia (pictured, right), president and general manager at Kasten by Veeam, spoke with Dave Vellante, host of theCUBE, SiliconANGLE Media’s livestreaming studio, during VeeamON 2021. They discussed how the acquisition of Kasten makes Veeam well positioned in the data protection and recovery market for hybrid cloud environments, the features of the new version of Kasten K10, which offers protection against ransomware attacks, and the prospects for the growth of the Veeam in this scenario. (* Disclosure below.)

Protection for Kubernetes as a standalone product

Kasten’s integration into the Veeam Cloud Data Management platform positions Veeam to meet most data protection and recovery needs for hybrid cloud environments. But Veeam will continue to have a standalone product for Kubernetes and the container world, according to Allan. The reason for this is that Kubernetes administrators want their own solution developed for their purposes, want it to run on Kubernetes and want to protect the uniqueness of their infrastructure.

“If you think about a lot of the container-based systems, they’re using structured data and unstructured data, but they’re also using object-based storage [and] they’re using message queues,” Allan explained. “So, they have their nuances, and we want to maintain that in a standalone product but integrate it back into the core Veeam platform.”

The latest news about Veeam and Kasten is the release of the Kasten K10 software platform with immutability features for defending Kubernetes environments against ransomware attacks.

“People’s data is precious; people are running a large fleet of nodes for Kubernetes with these large number of clusters,” Tolia said. “So, what we said is: ‘How do you protect against these malicious attacks that want to lock people out? How do we bring immutability so that even someone with keys to the kingdom can’t compromise your backups and you have quick restores?”

The idea behind data immutability is to store files in a form that can be viewed but not edited or deleted, which blocks ransomware from encrypting them. The capability is also useful to prevent accidental deletion of important records by employees.

The Kasten K10 protects data in the Kubernetes environment while maintaining the original vision behind Kasten, according to Tolia.

The outlook for the Veeam-Kasten alliance will contribute to Veeam’s already accelerated growth, which reached 17.9% in revenue year on year in the second half of 2020, according to Allan and Tolia.

“The one obvious thing that you’re going to see is tremendous growth on the company’s side, and that’s because Kubernetes is taking off, cloud is taking off, SAS is taking off,” Allan said. “One of the things that we’re clearly doing is we’re leveraging the power of a few thousand salespeople to bring this out to market, and so there’s a merging of sales and marketing activities leveraging that scale.”

Watch the complete video interview below, and be sure to check out more of SiliconANGLE’s and theCUBE’s coverage of VeeamON 2021. (* Disclosure: TheCUBE is a paid media partner for VeeamON. Neither Veeam Software Corp., the sponsor of theCUBE’s event coverage, nor other sponsors have editorial control over content on theCUBE or SiliconANGLE.)