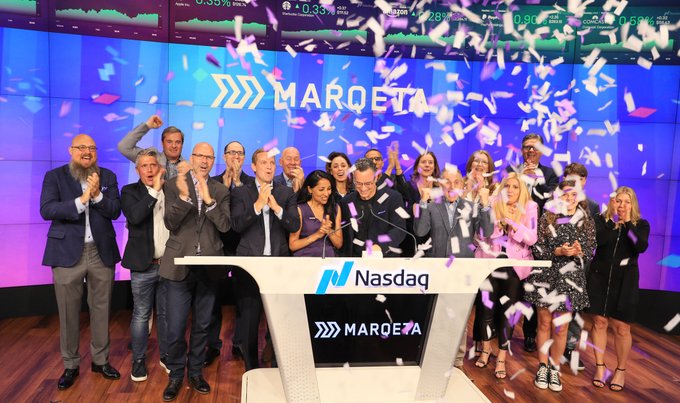 Surging growth helps Marqeta raise $1.2B in one of 2021’s biggest fintech IPOs

Marqeta Inc., a financial technology company that more than doubled its revenues last year and counts tech giants such as DoorDash Inc. among its customers, has raised $1.2 billion in its initial public offering.

The company wrapped up the IPO late Tuesday with a valuation of more than $14 billion. It began trading on the Nasdaq stock exchange this morning and immediately saw its stock price jump more than 15% to surpass $31 per share. That’s up from the $27 Marqeta fetched per share from IPO investors and well above the company’s initial target price range of $20 to $24.

Marqeta operates a cloud service that enables companies to issue payment cards. Digital banks can use the service to provide payment cards to their users. Software firms can use it to let engineers purchase subscriptions to development tools online without having to go through the finance department. Marqeta counts many major tech companies among its customers including DoorDash, Uber Technologies Inc. and Square Inc., among others.

“Innovative companies today want to offer their own card solutions to their customers, but that’s just the tip of a much much larger opportunity on the horizon,” commented Roy Ng, chief executive of Bond Financial Technologies Inc., a financial technology startup backed by Goldman Sachs. “Demand will grow exponentially to include more financial product offerings that spark customer engagement and integrate new rewards programs.”

Marqeta makes money by charging a fee for every payment made using one of its cards. The company processed more than $60 billion worth of payments during 2020 and generated $290 million in revenue from commissions, more than double what it made a year earlier. Revenues rose again in the first quarter of 2021 to reach nearly $108 million, which translates into an annualized run rate of more than $400 million.

Marqeta’s triple-digit sales growth is unusual for such a large company even in the fast-expanding  financial technology market. Moreover, the startup has managed to combine its sales momentum in recent quarters with cost reductions.  Marqeta cut net losses by 18%, from $58.2 million in 2019 to $47.7 million in 2020, and reported an additional 12% year-over-year decrease in losses for the first three months of this year.

The company’s service has proven such a hit with digital banks and tech firms because it automates many of the steps normally involved in issuing cards. Marqeta removes the need for companies to establish partnerships with the array of suppliers needed to bring a new payment card to market. It provides a set of pre-packaged features for managing and securing user funds.

The result, Marqeta says, is a speedup of several months in how fast firms can issue a new a payment card.

The other, often equally time-consuming task the company helps its clients streamline is software integration. Firms such as digital banks usually offer payment card features to their users as part of a broader platform, such as a personal finance app. As a result, they have to integrate the features into their platforms, which normally requires significant software engineering resources.

One of the ways Marqeta simplifies the process is by proving a technology it calls PCI widgets. PCI is the name of a data privacy standard with which applications must comply before they can process credit card details. Normally, achieving compliance with the standard requires extensive code customizations. Marqeta’s widgets provide PCI features that offload the task of processing credit card details from applications, which frees up developers for other tasks.

The company plans to expand its feature set to yet more use cases now that it’s a publicly traded firm.

“This year alone, the market for global money movement is estimated to be $74 trillion,” Marqeta co-founder and CEO Jason Gardner wrote in the company’s IPO filing. “At scale, the winners in this industry will control the vast majority of the volume. Our job is to build the go-to-market Platform that winners default to globally. Over time, we intend to broaden our Platform by introducing additional capabilities and functionality.”

The company’s strong Nasdaq debut today sends a positive signal to the other multibillion-dollar IPO hopefuls in the fintech market. One such IPO hopeful, Klarna Bank AB, is said to be raising capital at a more than $40 billion valuation ahead of its stock market listing. The startup previously indicated it was planning to go public this year or the next.

Fintech companies have achieved steep valuations in recent years partially because they’ve found themselves in a strong position to benefit from the rapid growth of e-commerce. According to research from Visa Inc. that Marqeta cited in its IPO filing, the share of global retail commerce conducted online is expected to more than double from 9% in 2016 to 19% in 2022.