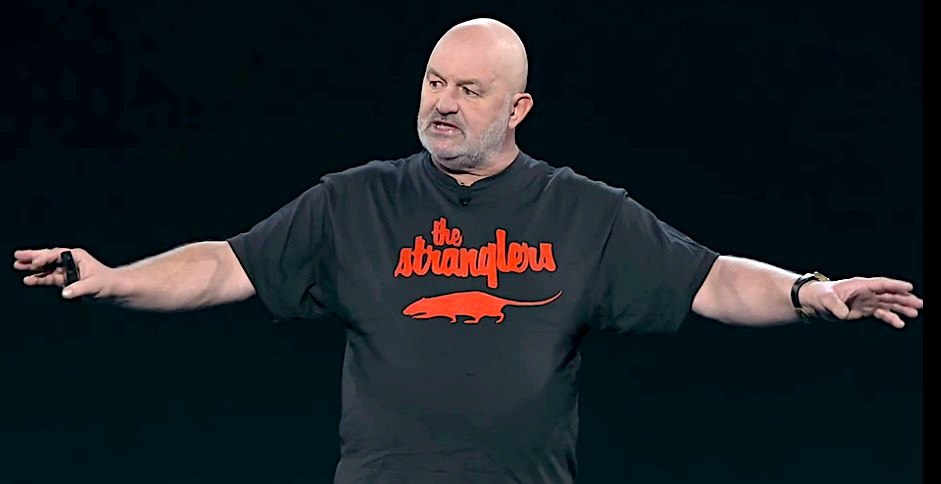 For a top technologist accustomed to keeping a laser focus on the future, Werner Vogels positioned much of his keynote at AWS re:Invent by looking back into the past.

As if to amplify the historical theme of his presentation, Vogels (pictured) strode the keynote stage today wearing a T-shirt — he wears one that celebrates favorite rock bands every year — that celebrated The Stranglers, a British punk rock band formed in the 1970s. One hit single from band’s early years was “Something Better Change.”

The chief technology officer of Amazon.com Inc. made numerous references to his first re:Invent keynote in 2012 when he outlined a set of core tenets for the development community. These included “Create APIs with explicit and well-documented failure modes” and “Avoid leaking implementation details at all costs.” Vogels encouraged the re:Invent crowd to re-watch his presentation, a video of which can still be accessed on YouTube.

“Back then, I promised you I would fix the speed of light,” Vogels said. “It’s still on my to-do list.”

Despite Vogels’ interest in the lessons of a decade ago, he offered plenty of announcements for the present day during two-hours of keynote remarks. These included the offering of M1 Mac minis as part of EC2 and the news that 30 new AWS Local Zones would be coming online for the company’s extensive datacenter network.

AWS is also rolling out a Cloud WAN running on the company’s infrastructure that will automatically connect to the nearest zone location, and it announced AWS Amplify Studio, a tool for developers to build web and mobile applications in a matter of hours.

“You have always asked us for more simple machines, more of these simple components,” said Vogels, who took note of the more than 200 cloud services now offered by AWS. “But remember, you have asked for this, so it is basically your fault.”

Amazon’s CTO spent time on two particular areas during his re:Invent appearance. One involved identity and access management or IAM and its growing importance in the role of application programming interface calls.

Access control over the vast array of AWS products and services is a key concern in an increasingly security-conscious enterprise world and Vogels outlined the company’s Signature Version 4 signing process which creates new device keys unique to one user, one service, one region, and on one date.

As Vogels explained, this will become more significant as enterprises demand secure device connectivity at the edge for critical API calls.

“We’ve been able to build an ultra-fast access control system that doesn’t exist anywhere else,” Vogels said. “Why is this so important? IAM routinely handles half a billion API calls per second.”

Another key area which Vogels focused on was AWS’ space-based initiative. In 2019, AWS announced general availability for its fully managed Ground Station service which controls the downlink and processing of satellite data.

The service has gained traction among a number of vendors over the past two years, including space logistics provider D-Orbit which integrated AWS Ground Station with its cloud-based mission control software. Capella Space Inc., for example, is using Ground Station for its network of earth observation satellites, providing app-based services akin to tapping into delivery of dinner from a preferred restaurant.

“Ordering imagery from space is now like ordering your favorite food from a website using an app,” Payam Banazadeh, founder and CEO of Capella Space, said during a presentation at the re:Invent keynote. “You are literally one API call away from accessing a powerful network of orbiting satellites.”

While Thursday’s keynote presentations reflected both past and present for enterprise tech, Vogels also had a few thoughts to offer about the future. Later in the day, AWS provided the media with his annual tech predictions, this time for 2022 and beyond.

Among Vogels’ predictions are a belief that machine learning will begin to play a major role in augmenting software developers’ workstreams, that the cloud will extend into every locale thorough purpose-built devices and specialized solutions, and that low Earth orbit satellites will finally bring affordable broadband to every corner of the globe.

Vogels also indicated that 2022 will see the rise of smart spaces, especially in the area of senior care, and developers will begin to make more sustainability-conscious decisions about the systems and applications being built.

“We have reached an inflection point,” Vogels noted with the release of his list for 2022. “After AWS pioneered cloud technology more than 15 years ago, cloud infrastructure has evolved to a place where we are seeing all parts of the cloud reach practically anywhere on the planet — and even into space. The cloud has allowed what was once science fiction to become science fact.”