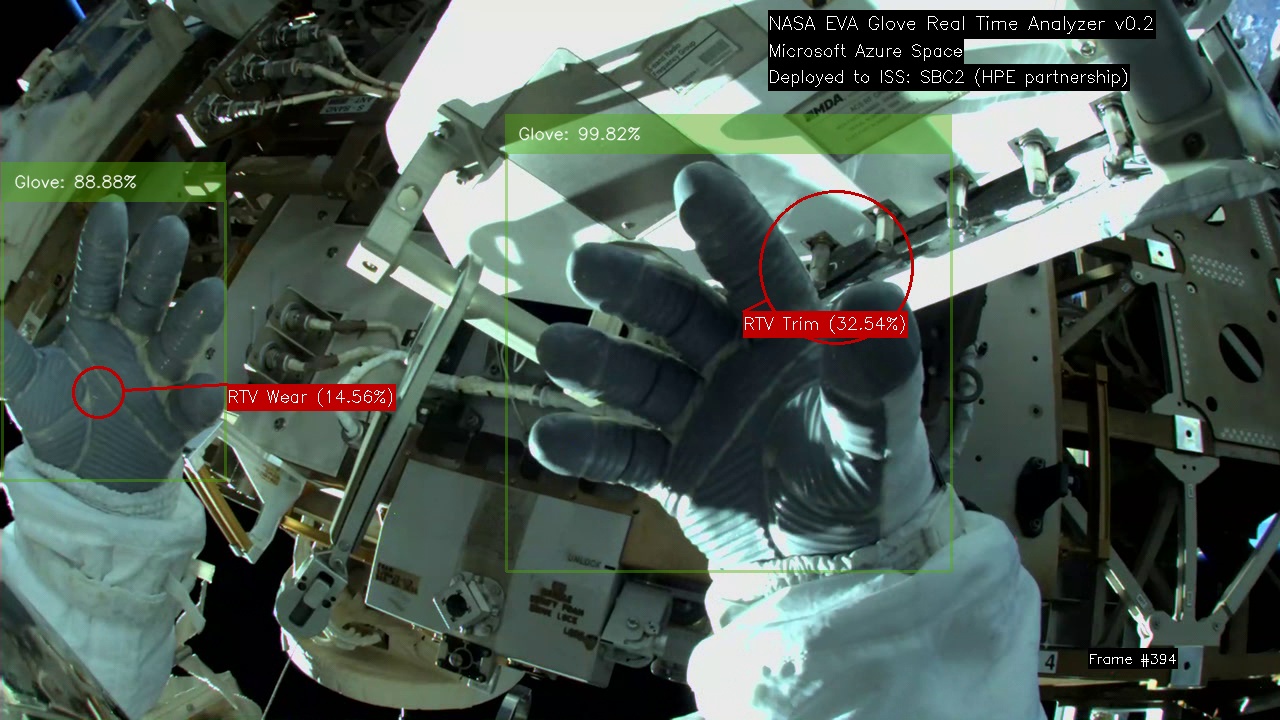 Microsoft deploys and tests AI models in space aboard the ISS

Microsoft Corp. today revealed how it has been working with Hewlett Packard Enterprise Co. and the National Aeronautics and Space Administration to develop and test artificial intelligence models in orbit aboard the International Space Station.

One of the first models they developed is designed to handle the chore of checking astronaut’s gloves after each spacewalk for wear and tear.

The test was one of about two dozen experiments involving AI, cloud and edge computing that were run on HPE’s Spaceborne Computer-2, which was installed on the ISS about a year ago. Spaceborne Computer-2 is an edge computing and AI-enabled system designed with rugged solutions capable of withstanding the rough conditions of space, can perform more than 2 trillion calculations – or 2 teraflops – per second.

Checking astronaut’s gloves is an essential part of the safety procedure that takes place after each spacewalk. Each time they return to the ISS, astronauts have to take photos of their gloves and download them to Mission Control, where they’re closely inspected to ensure they haven’t been damaged or contaminated in any way. Astronauts also perform visual inspections of their gloves during spacewalks: One notably created headlines in 2007 after spotting a tear in one of the gloves, causing a spacewalk to be abandoned early.

That chore has become easier thanks to Microsoft, which has developed an AI model that’s able to streamline the glove inspection process.

As Microsoft explained in a blog post, astronaut gloves have five layers, with the outer layer a rubberized coating that ensures the wearer can grip things, while also acting as a protective layer. Underneath that is a cut-resistant material called Vectran. Then there are three additional layers that are designed to maintain the pressure inside the space suit, while also protecting the astronaut from the extreme temperatures in space.

Microsoft’s AI-powered glove monitor was trained by using hundreds of images of new, undamaged gloves, as well as images of used gloves that have experienced lots of wear and tear from spacewalks and terrestrial training. These were tagged according to the specific kinds of wear and tear they might experience. The labels might recognize gloves where the outer rubberized layer has begun to flake off, or those where the essential Vectran layer has been damaged.

Microsoft trained its AI models on these images using the Azure Cognitive Services Custom Vision service. The data was then used to train a cloud-based AI system that runs aboard the ISS.

Now, each time an astronaut returned from a spacewalk, the computer could photograph their gloves, and the images could then be compared with existing photos of damaged gloves. The AI then generates a probability score for the likelihood of damage being sustained in a particular area of each glove. If any damage is suspected, the images will be sent back to Mission Control for further, manual inspection by NASA’s engineers.

“What we demonstrated is that we can perform AI and edge processing on the ISS and analyze gloves in real time,” said Ryan Campbell, senior software engineer at Microsoft Azure Space. “Because we’re literally next to the astronaut when we’re processing, we can run our tests faster than the images can be sent to the ground.”

Microsoft said the experiment was just one of a series of tests designed to see if AI can be relied upon in space. It believes AI tools will become essential in future space missions as NASA sends crews beyond Earth orbit.

“One has to wonder what the limits of artificial intelligence will be,” said Constellation Research Inc. analyst Holger Mueller. “With Microsoft using AI to inspect the integrity of astronaut’s gloves after spacewalks, it’s showing that the technology appears to have no limits, enabling expertise to be provided in almost any situation without the presence of the experts themselves.”

Some of the other tests were equally interesting. For instance, Microsoft has partnered with the aerospace manufacturer Thales Alenia Space to create a sensor system that’s designed for Earth observation from the ISS. The system is focused on processing climate data.

In addition, Microsoft said it’s working with Ball Aerospace & Technologies Corp. to develop a series of on-orbit testbed satellites that will enable the agile implementation of new hardware and software for U.S. government applications in space. The idea is to demonstrate reconfigurable, on-orbit processing technologies that leverage Microsoft’s Azure Cloud in space.

Lastly, Microsoft said it’s working with Loft Orbital Solutions Inc. to develop tools for building, testing and validating new software applications that can be executed in orbit by satellites. These new software development capabilities will be brought to market via a jointly used satellite that’s set to launch in 2023.